I suspect I’ll never be on any manufacturer’s “early review copy” list for new lenses. There are already plenty of good early lab reviews on the eagerly awaited Sigma 50mm f/1.4 Art lens at SLRGear, Lenstip, and DPReview, among others. So when we received our first Sigma 50 f/1.4 Art lenses for rental stock I really didn’t plan on posting about it.

But I always think it’s worthwhile to review multiple copies of a lens bought off-the-shelf from retailers. Plus, we’ll have our new MTF bench installed in another week or two, and I want to do some comparisons using the bench versus Imatest, so when we got our first seven copies of the Sigma 50mm f/1.4 Art in yesterday I compared them with Imatest. I decided I might as well post the results, even though I’m a bit late to the party.

The comparison most people are making is with the Zeiss 55mm Otus, because the Sigma Art and the Otus are both newly designed, excellent lenses. I added the Canon 50mm f/1.2 into the mix, since I suspect some 50mm f/1.2 shooters are wondering if they should migrate to the new Sigma. I choose a beat up and battered two-year-old Canon for the photo below, just to emphasize that it goes into this contest like a prize-fighter coming out of retirement for the fifth time. True, it was released in 2006, but even that was something of a comeback. The optical design dates back to the early 1980s. 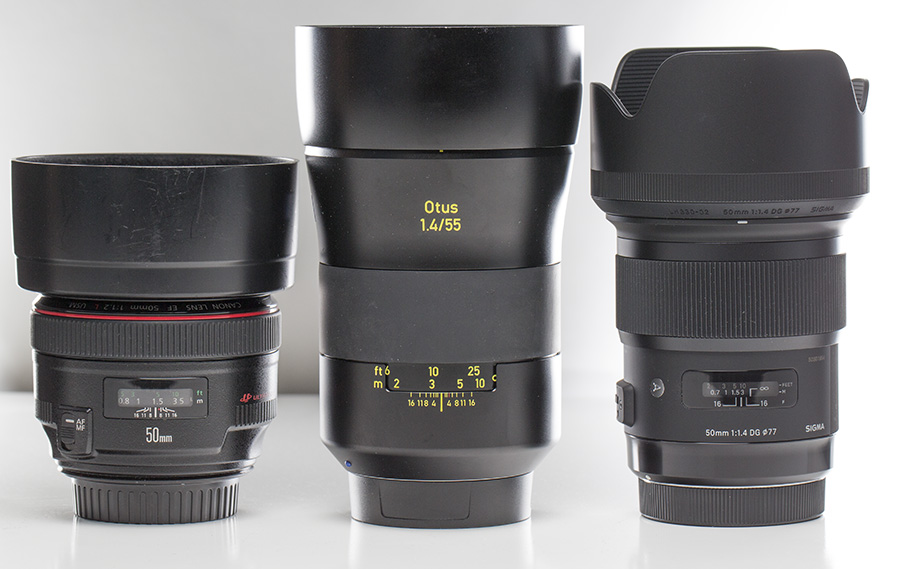 As always, this isn’t a complete lens review, just lab testing and comparisons on multiple samples.

The Canon has a simple double Gauss design with 8 elements in 6 groups. The Sigma has 13 elements in 8 groups, while the Otus has 12 elements in 10 groups.

The other specifications are pretty clear: the Zeiss is really big and really expensive, the Canon is smallest and goes to f/1.2, the Sigma is easily the least expensive and middle-sized.

This isn’t a lens review, but for someone who does a lot of manual focus, I absolutely love the smooth, long-throw focus ring of the Zeiss. The Sigma Art manual focus ring is really excellent, too — very smooth and accurate. After using those, the Canon’s manual focus ring feels like a greased pig.

The Sigma’s autofocus was quick and accurate on a 5D Mk II and 6D in good indoor lighting, but I didn’t stress test it under difficult conditions or with moving targets. You’ll want to read some hands -on reviews to get better information about that. The Zeiss’s autofocus system, of course, isn’t.

Every review I’ve seen so far states the Sigma Art’s resolution numbers are very close to the Otus. I’m not here to argue, as the graph below shows. (Testing distance was at 10 feet for the Sigma and Canon, 11 feet for the Zeiss.) 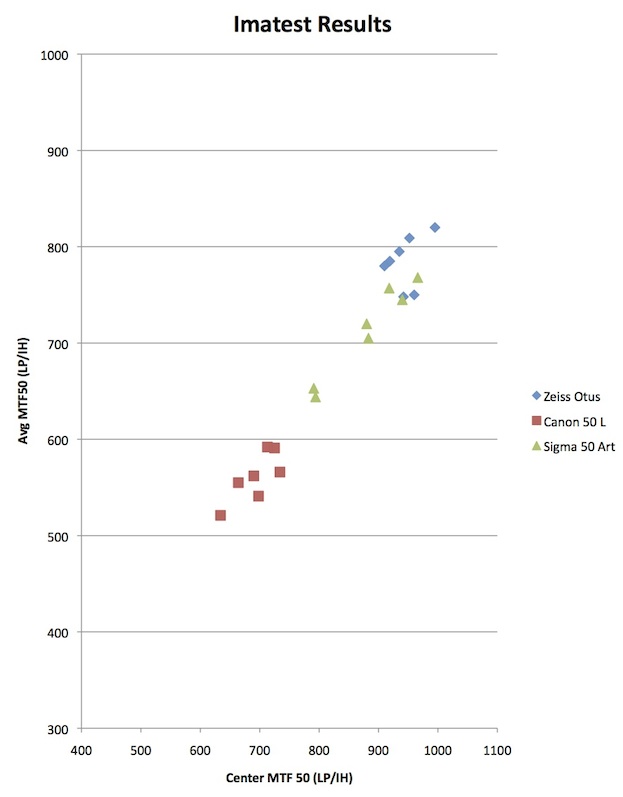 I imagine, just like me, you notice there’s a bit more spread for the Sigma copies than either the Canon or Zeiss copies (especially when you consider the Sigma copies were all new-in-box and the others were used copies off of our shelves). I think this is just fairly normal sample variation — if I had 30 copies instead of 7, we’d probably be seeing similar pattern sizes for all 3 lenses. But I won’t be comfortable with that answer until I have the chance to test another 15 or 20 copies. We won’t be getting anymore this week, (they are understandably hard to come by right now) so I’ll add further testing as an addendum to this article in a week or so. I did, of course, repeat these test runs multiple times to make sure there wasn’t any testing problem, and there wasn’t.

Remember also that we’re looking at hair-splitting MTF numbers here. Even the two “lower” Sigma copies are clearly outresolving all of the Canon copies, and the Canons were shot at f/1.4 to make sure the playing field was even. Carefully testing on an ISO 12233 chart showed all of the Sigma lenses resolved well with no soft corners or astigmatism, which is the main reason I think this is just sample variation.

Watching how the lenses behave as they are stopped down is interesting. The graphs below show center, weighted average, and corner resolution (corner numbers are the average of horizontal and vertical readings in each corner) for each type of lens from wide open to f/11 on 5D Mk II cameras. The Canon is shown at both f/1.2 and f/1.4, the other two, of course, start at f/1.4. 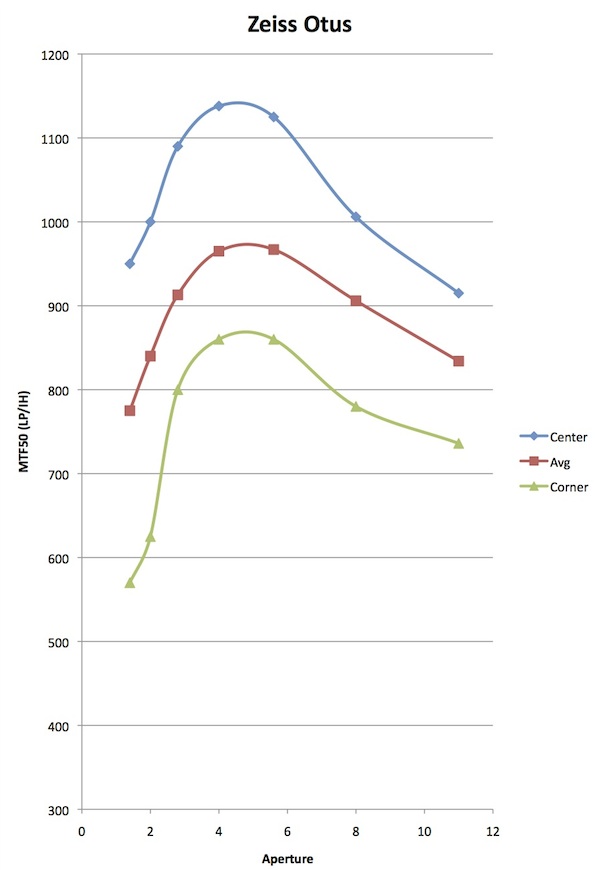 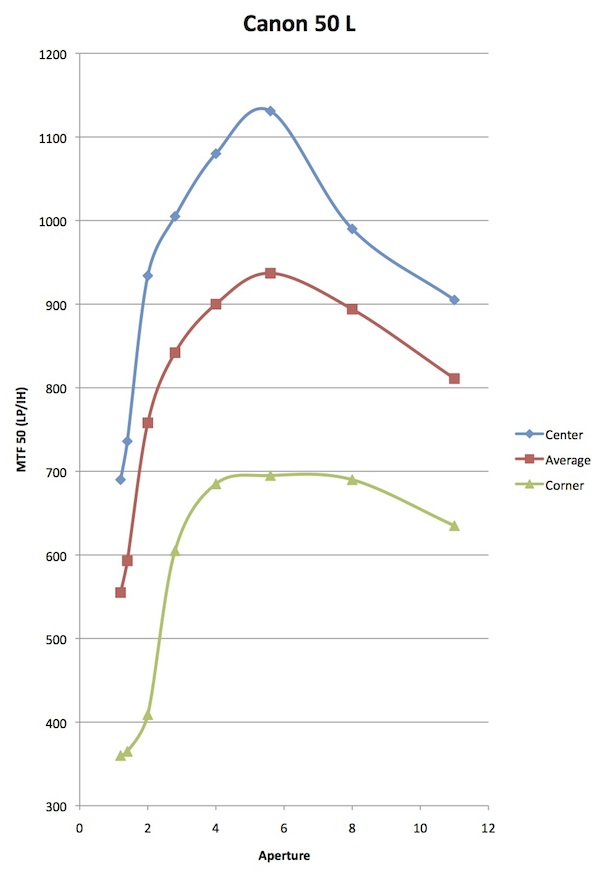 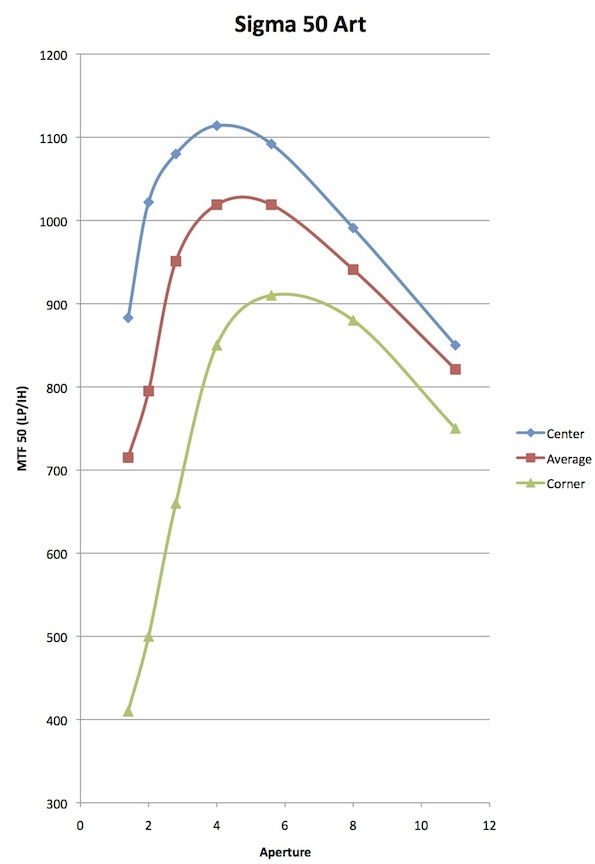 The Zeiss corners peak a little earlier than the Sigma (at f/4), but at f/5.6 resolution for those two is virtually identical. The Sigma corners are even a bit better at f/5.6 The Canon hangs with the other two lenses in the center, but its corners never sharpen up quite as well as the other two do.

I really don’t have a lot to add to what has already been said. From a resolution standpoint the Sigma is nearly as good as the Zeiss Otus, and clearly better than the Canon 50mm f/1.2 L. It does this at a price point far lower than either of the others. There may (or may not) be some sample variation, but I won’t know for certain until we’ve tested a lot more copies – but even the weakest two copies of the Sigma were clearly better than any of the Canon’s.

Of course, people buying wide aperture 50mm lenses are at least as interested in bokeh, autofocus accuracy, color rendition, and a number of other traits as they are in resolution. More and more images are being posted every day to let you assess that before making a decision. But assuming those things all turn out acceptable to you, it’s hard to imagine a better value at 50mm than the Sigma 50mm f/1.4 art.