Testing for a Decentered Lens: an Old Technique Gets a Makeover

What is Decentering and What Does it Do?

Strictly speaking, decentering would involve one or more of the lens elements being off of the central axis of the lens. This would prevent the curved surfaces of the lens from bending the light properly. In severe cases it could result in halos or ghosting. In most cases it causes softness, especially away from the center of the lens. A decentered lens may be normally sharp in the center, but very soft in the corners. Or it may just be soft and blurry everywhere. Most lenses have one or more elements that are adjusted to correct centering. Which element that is varies depending on the lens type and design. The front element is often a centering element, with the rear element being the second most common centering element. 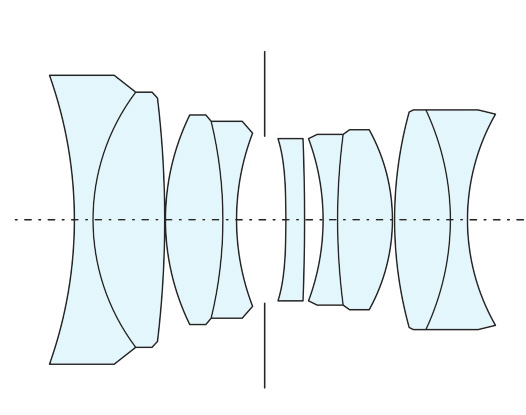 Diagram of a Perfect Lens 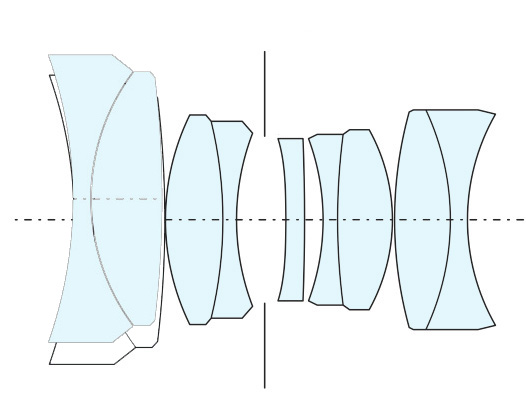 Lens with the Front Element Decentered

An element can also be tilted to one side or another. Strictly speaking this is not decentering, but it can have similar effects, so people often say a lens is decentered when in fact it’s tilted. In this case one axis may remain sharp, but the other will be out of sorts. If the tilt is side-to-side, the top and bottom of the image might be fine, but both sides soft. If it is corner-to-corner the top right and lower left corners might be fine, while the top left and lower right are soft. High quality lenses usually have one or more elements on which the tilt can be adjusted by two or three elliptical collars. 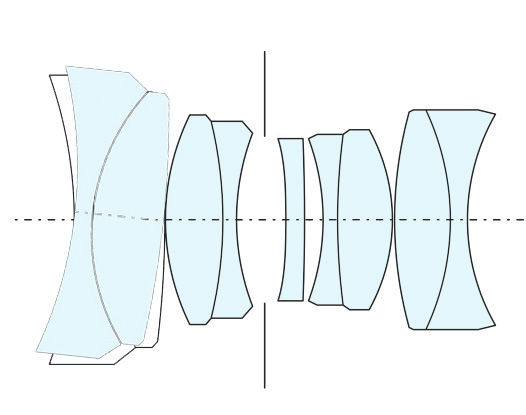 Lens with the Front Element Tilted

The third problem that can occur with lens elements is spacing. If elements aren’t the proper distance apart the lens may not focus the image sharply, or might not focus all the way to infinity. But the lens is not decentered and the tests we’re describing would be normal. There are usually a couple of elements that have ‘critical spacing’ within the lens. Theses are adjusted when the lens is assembled either by removable shims or by installing an element on a ‘ramp’ so that rotating the element moves it forward or backward. 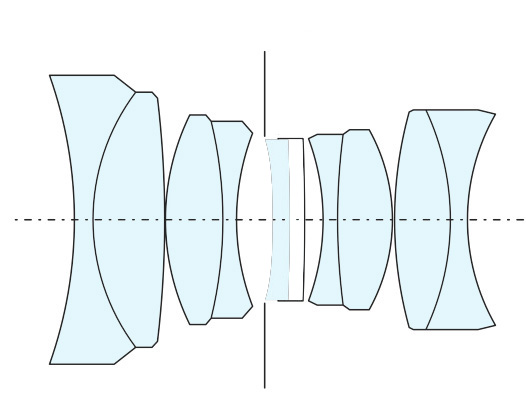 Lens with a Poor Spacing of a Central Element

It would be nice if we could say “a decentered lens looks like this” and “a tilted lens causes that”. Unfortunately lenses are too complex for that. But one common issue people ask me about is a lens that seems OK in the center but is very soft in the corners. Sometimes that’s just how the lens is designed. But if the lens doesn’t have a reputation for soft corners, it may well be that the copy in question is decentered.

The Way It Used to Be

Back in the days of film and manual focus lenses, most repair shops had a centering collimator. It shined a star chart or a chart of concentric circles through the lens. If an element was decentered the chart would flare or be distorted in one direction. The technician would then adjust those elements that could be adjusted until the lens was properly centered. Obviously in film days you didn’t take a test shot, send it off to be developed, make an adjustment, take another shot . . . . it was all done off camera.

When lenses became more automated, so did testing: Lenses are mounted to the manufacturer’s electronic test system and most of the adjustments made electronically – or the computer report suggests which lens elements need be adjusted. The equipment is breathtakingly expensive and only the factory and some (not all) factory authorized centers have access to it. Standard centering collimators became a thing of the past, except for some specialty shops. (You can find them on eBay every so often if you want one to keep around the house.)

A Simple Test for Decentering

If you want to correct a decentered lens you need an optical bench, a computerized MTF program, or at the very least a lens projector and a lot of knowledge about which elements can be adjusted to correct an abnormality. But if you just want to check and see if your lens is centered properly (at least for most lenses) you don’t need much equipment at all. Now that we have live-view focusing and the ability to look at images in real-time, we nearly have the same thing as a centering collimator built into our camera and lens. You need just a couple of accessories: a tripod to give your camera a stable platform and a simple chart.

The screening test I’m going to describe is not perfect: a few lenses (particularly ultra-wide and 10x zooms) will give false-positive results; and this test won’t detect other causes of softness like problems with spacing of elements. But it’s at least 95% accurate for detecting decentering in our experience (which is for several thousand lenses tested over-and-over).

We use a the Zeiss modified Siemens Star Chart. Star Charts are often used as focusing aids, which is one of the reasons we put them on the resolution charts we use for Imatest and our other testing setups. You determine the lens is properly focused as the rays of the stars get closer and closer to the center. The Zeiss version adds a small white circle around a small black dot in the middle of the star chart. You can buy them for about $30. 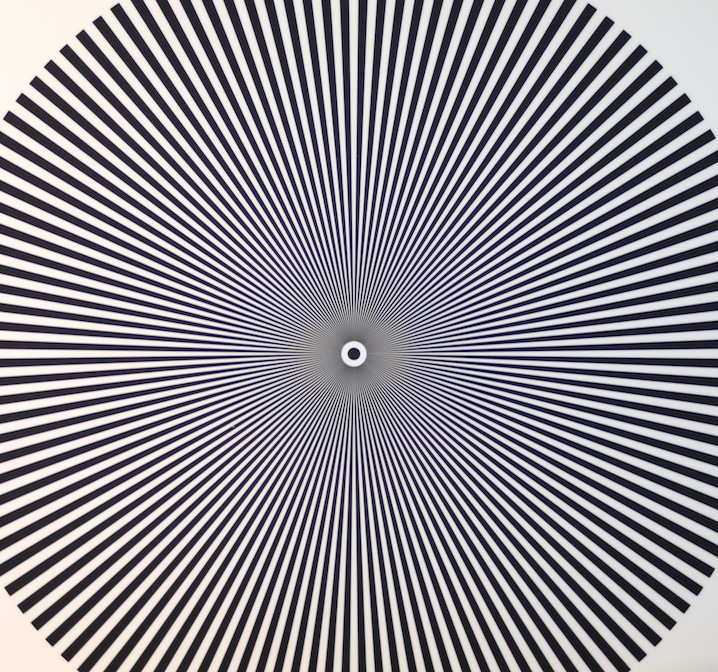 If you manually defocus the lens just a bit, the star rays and the white and black circles in the center blur, of course. If the lens is in proper alignment and pointed directly (lineup isn’t critical, you can eyeball it) at the star, the white and black circles remain circular as they blur. But if the lens is decentered or significantly tilted the center blur will ‘flare’ out in one direction or another as you defocus. 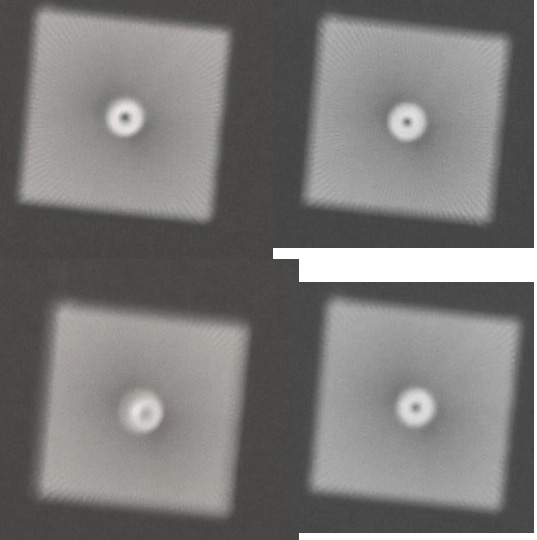 Even at the low resolution of blog-post graphics you should be able to tell that one of these things is not like the other: the lens in the lower left has a blur which is flared out toward 9 o’clock while the other three lenses have nice round blurs. The nice thing about this test is it’s not very set-up critical. The chart doesn’t have to be exactly in the center of the lens, you don’t have to line the lens up at exactly right angles to the chart, it doesn’t even matter which way you go out of focus (near or far) or exactly how far you go.

Let’s look at the resolution tests we did on the same 4 lenses using our Imatest lab – keeping the graphs in the same positions as the star patterns were above. Yellow areas are the highest resolution, blue are worst. 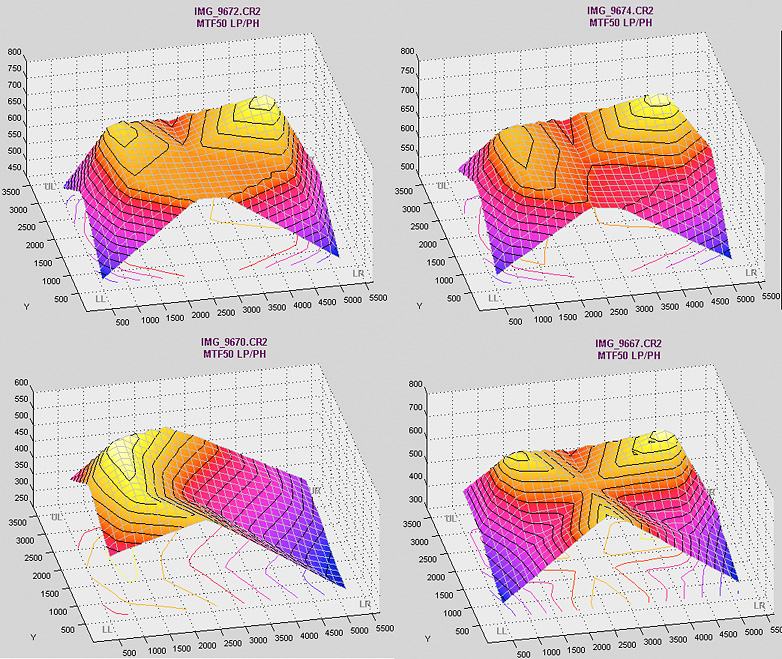 Imatest results for the 4 lenses

You probably notice that our lower left lens (the one with the flared star chart) has a pattern much softer on the right side. Also note the vertical axis (which shows the peak resolution) is different for this lens (the program automates the axis). The other three lenses peak near 800 line pairs, while the lower left lens peaks at about 600. It’s significantly worse than the other lenses.

Our star-chart flare did a nice job of identifying this decentered lens. The other thing that’s nice is the expensive Imatest lab shows me exactly how much the lens is affected, but it doesn’t show WHY it’s affected. The star chart made it pretty obvious the lens had a centering problem. We recentered the front element (the most common place for decentering on this particular lens) and the lens returned to perfect resolution.

If you don’t have $30 to spend on a Zeiss Star Chart, you can make a reasonable substitute yourself: just stick some white rings (like notebook paper reinforcing rings) on some black posterboard. 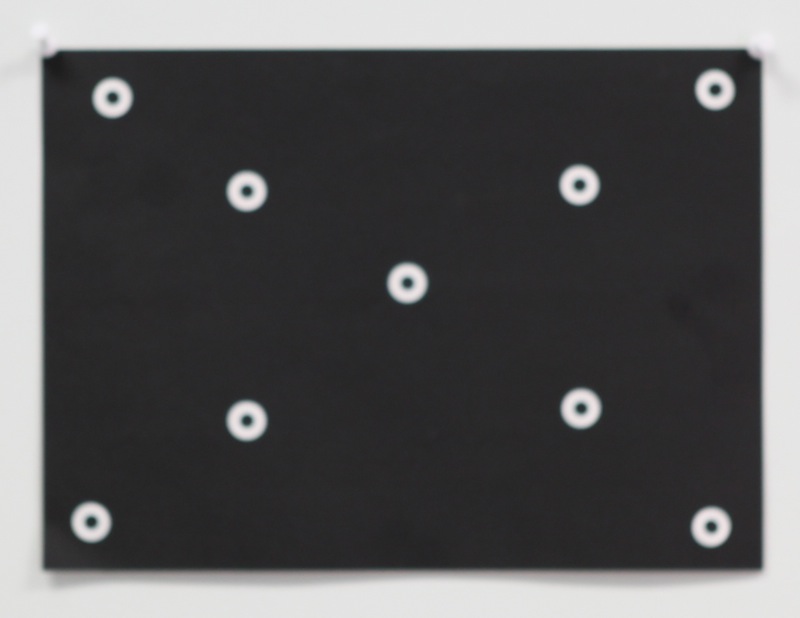 The flare isn’t as easy to spot as with the star chart, but it’s still noticeable. Here are the same four lenses that were used for the example above. Look particularly at the black center and see how it bleeds out onto the white circle at 5 o,clock — the opposite direction from the white flare noticed above. There is still some white flare noticeable: compare the outside of the white circle at the lower right and upper left areas. It’s not as easy to spot as the Star Chart flare, but it’s there (and this chart is free). 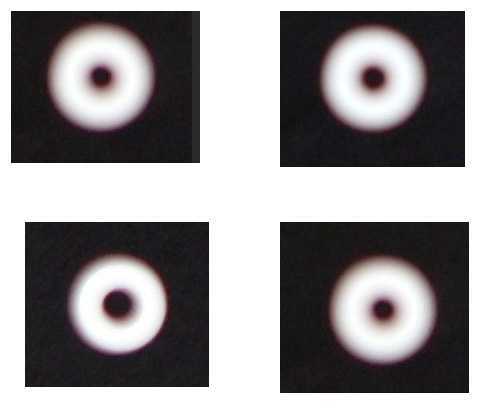 Using the Star Chart as a poor-man’s centering collimator is a nice screening tool. It’s not perfect by any means. Some consumer grade zooms (particularly superzooms), some retrofocus lenses, and a few others show a pattern like this even when they are perfectly aligned, but those are the exception. For the majority of lenses, seeing a decentering pattern when the lens seems soft provides you some confirmation that the lens has a problem and may need a trip back to the factory. It can often answer the ‘is it me, or is it the lens?’ question. It may provide some further data when you’re trying to decide if the corners on your new lens are supposed to be sharper than they seem.

Because I know some people are going to ask, I don’t recommend trying to adjust lens elements at home using this method. Centering the lens element to remove the flare can be a good starting place and we do it here. But it’s just a starting place and you need a LOT of other equipment to fine tune the resolution (especially in a zoom). There are some lenses that don’t have any elements that allow tilt or centering — a factory rebuild is the only option when it gets out of sorts. With others, nearly complete disassembly is required to make such adjustments. And, of course, opening up your lens voids any warranty.