The Development of Wide-Angle Lenses

When I started my series about the history of lens development, I had planned three articles ending at the turn of the 20th Century. By that time many modern, excellent lenses had already been developed and it seemed a natural stopping point. After my series of 3 articles, I planned to return to 1840 and start on the history of cameras. However, I am the poster child for that old saying, “when I want to give God a good chuckle, I tell him what my plans are.”

Stopping after the first three articles left out three major lens developments, and after some prodding I wrote a fourth article about the development of the telephoto lens. That sort of leaves things unbalanced, because I haven’t said anything about the other extreme: wide-angle lenses.

Way Back in the Day

The vast majority of the lenses developed in the early days of photography were what we would consider standard range or short telephoto lenses. They had angles-of-view of 45 to 15 degrees, which is equivalent to 45mm to 150mm focal length on a full-frame SLR. As I discussed in The Schott Heard Around the World, Sutton did design a water-filled circular lens around 1860 that gave a 60 degree angle-of-view (about 35mm), but with an aperture of f/30, it wasn’t very practical.

This was followed by the Harrison Globe Lens and the very similar Pantoskop Lens in the 1860s, both of which had nearly spherical surfaces. 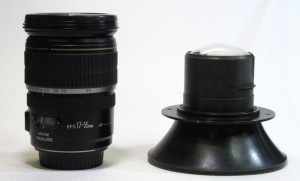 A Harrison Globe lens next to a modern lens. Note the spherical rear element.

These lenses, followed later by the Hypergon, provided fields of view to 75 degrees (about 28mm) at apertures around f/20. 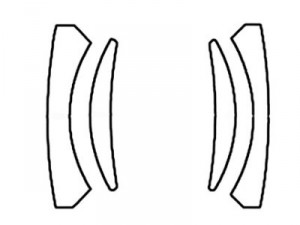 Diagram of a Double Gauss lens.

Several Double-Gauss type lenses available in the early 1900s, such as the Arisostigmat and Ross Homocentric lenses gave fairly wide-angle views. In 1933, another Double Gauss design, the Zeiss Topogon, was released. It provided a very wide 90 degree field-of-view (equivalent to a 21mm lens on a full-frame SLR) at f/6.3.

Soon after, a number of other lenses with similar but more complex designs were developed, including the Leica Elmarits, Zeiss Biogons, and a number of others. These proved excellent wide-angle lenses in the 18mm-equivalent range, giving apertures as low as f/2 on all the cameras of the time.

These short focal length lenses were perfectly fine for box cameras, view cameras, and even rangefinder cameras, but in the late 1930s, a new kind of camera was introduced — the Exakta — the first SLR camera. 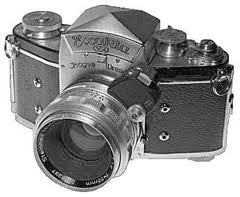 These cameras presented a problem that didn’t occur with other types of cameras: they had a large mirror that reflected the image to the viewfinder, but then had to lift out of the way to expose the film. The rear element of the lens had to be at least 35mm (the width of the mirror) away from the film plane. (For you young people, film is an ancient proto-Indo-European word meaning image sensor.)

This presented a particular problem for wide-angle lenses. The focal length of short focal length lenses is, well, short. The back of the lens had to be physically very close to the film, so they couldn’t be used with an SLR camera; the rear element would block the mirror. For this reason, wide-angle lenses presented even more of a problem for SLR cameras than they did for other types of camera.

The solution was fairly obvious, and had already been invented — not for photography cameras, but for small movie cameras. The design had been made by H. W. Lee of the Taylor Hobson Company, the same folks who produced the Cooke Triplet lens, which was perhaps the most significant lens ever made. By the late 1920s, Taylor Hobson had become arguably the top developer of motion-picture lenses, and had developed the Reverse Telephoto lens for small 8mm movie cameras. That type of lens would become the basis for all SLR wide-angle lenses, including the ones made today.

A telephoto lens: BFL is Back Focal Length, the distance between the rear of the lens and the image plane.

If the negative element is instead placed at the front of the lens, the back focusing distance becomes much longer than the actual focal length of the lens. 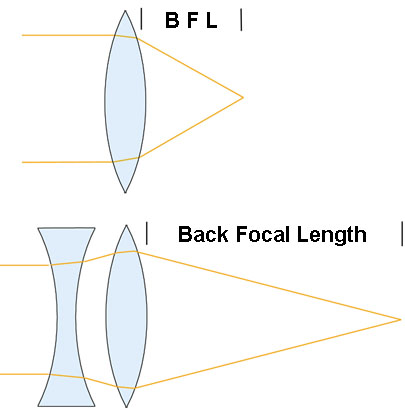 Adding a negative element in front of the lens dramatically increases the Back Focal Length: the Reverse Telephoto Lens

The leading company in the early development of reverse-telephoto type lens was Angenieux in France. They called their versions Retrofocus lenses, and the terms “reverse-telephoto” and “retrofocus” are fairly interchangeable today.

A real reverse-telephoto lens doesn’t look very much like my little diagram for several reasons. First is that the negative front element is almost always “bent” in a meniscus shape so that it gathers light in from a wide angle. There are often two or even three negative meniscus shaped elements near the front of a reverse telephoto lens. If I simply bend the negative element into a meniscus — I’ve got Photoshop, which is way easier than glass — and put a couple of them in front of a couple of random lens elements, you’ll see my diagram now starts to look like a lot of lens diagrams you may have seen. 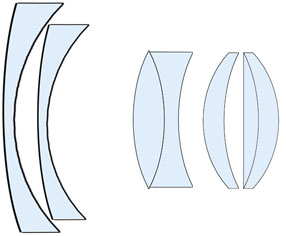 By bending negative elements into a meniscus, the typical reverse-telephoto lens appears.

The second reason is that the reverse telephoto lens is very difficult to design. Unlike telephoto lenses, where the light is coming into the lens from a narrow field of view, a wide-angle lens must deal with light coming in from… well, a wide angle. This makes them more prone to distortion and aberration in general. The big negative element in front exacerbates this problem, so most reverse telephoto lenses require a significant number of lens elements to correct this distortion. Additionally, reverse-telephoto lenses are never symmetrical (having similar reversed elements around a central stop), which we saw in earlier articles is a key to minimizing aberrations.

In general, the wider the angle of the lens, the more complex the problem becomes. Very wide angle reverse-telephoto lenses are among the most complex lenses made today, usually containing more than a dozen elements in an effort to correct all the aberrations. Several of these may be aspheric elements, which handle the rays of light coming in from a wide range of angles. Compare modern wide-angles to typical normal-range lenses from the same manufacturer:

Lens design of the Zeiss 21mm and 85mm lenses

Looking at the complexity required, it becomes rather easy to understand why good wide-angle SLR lenses are more expensive than lenses of more standard focal lengths. One other thing that’s less obvious in the diagrams but a significant impact on cost: all of those complex elements have to be lined up exactly on the same optical center and located precise distances apart. In a wide angle lens, a single element just a few millimeters off center (either in mount or manufacture) or tilted by a degree or two can markedly affect lens performance (Ruben, 1964). Wide angle reverse telephoto lenses require much tighter quality control to ensure consistent performance versus other designs.

It also may be apparent why wide angle lenses are physically so much larger than most standard-range lenses. It’s easy: all of those elements take up space. Remember in the Telephoto Lens article that the definition of a telephoto lens was a lens that was physically shorter than its focal length? The opposite holds true for reverse telephoto lenses: by definition and by design, they are all physically longer than their focal length.

So there it is, the article I’ve been trying so hard not to write. You can probably see one reason why: the subject is rather dry and complex, although it’s stuff that is good to know. Perhaps it’s not particularly useful, but it’s still good to know. The real reason why I didn’t particular want to write it is there just weren’t any fun stories here about unusual characters. My history of lenses has reached the 1940s and entered the days of corporate design, and corporations have a way of not creating many funny anecdotes.

Next time, I’m heading to the 1840s, back to the days when men were iron and ships were wood. Back to the good old stab-your-friend-in-the-back, break-the-rules-and-make-up-your-own days, when everybody who didn’t do it your way was an idiot and a bad photographer. Yes, next up we’ll talk about the thieves, showmen, and pompous (but often bankrupt) aristocrats who invented the first cameras.

Tweet
Posted in History of Photography
Who Invented the Telephoto Lens?
Powering Up With Gold Mount Batteries