The Apocalypse of Lens Dust

Apocalypse (from the Greek apokálypsis; “lifting of the veil” or “revelation”):

How appropriate the word apocalypse is for this little article. At least once a week I see a post somewhere from a fairly inexperienced photographer who thinks a definition 1 apocalypse has occurred: “OMG, my lens has dust inside!!!! How did it get there??? What will I do?? My shoot is ruiiinned!!!!!”

Pretty soon a more experienced photographer posts a definition 2 apocalypse to try to calm the first photographer down: “Lens dust is insignificant, you can never see it, it has no effect on your pictures.”

Well, the second post is far more realistic than the first. Every lens has dust inside and you can almost never see it in a picture (99% of the time you can’t). But obviously there must be some point where dust is either big enough or there’s just enough of it to become visible, otherwise we could fill our lenses with mud and then go take pictures.

Before we get into that, I’ll answer a few questions for those who are not experienced in the ways of lens dust:

How do I tell if my lens has dust inside?

You don’t have to tell. It does. Every SLR lens does (there are some airtight medium format and rangefinder lenses I believe). Some have more than others, of course, and you may have to look really hard, maybe even with a focused light to always see it. But if you’ve used it more than a couple of times, it does. If you look with a slightly angled light source at the front and back elements and through the lens will usually show you more than you want to see.

How does it get there?

What? You think the lens is assembled in a clean room and then hermetically sealed? Well, it is assembled in a clean room, but lenses aren’t sealed, air moves in and out … and air carries dust. Dust prefers to stick to something rather than float around (I’ve proven this definitively with the shelves in my office – I wasn’t just being lazy, I was doing an experiment) so once in the lens it tends to settle on an element. People assume that zoom lenses with extending barrels will “pump dust.” They do to some extent, but the dustiest lenses we see are actually some primes and short range zooms.

Can I clean it out?

Generally not, without partially disassembling the lens (and depending on exactly where it’s located, maybe not even then). Some lenses, like the Canon 17-55, are easy to open up and clean. Most aren’t. We clean out lenses when dust gets heavy for cosmetic reasons (it certainly looks nicer) but it’s amazingly rare for us to see any hint of lens dust in a picture.

So When Can Dust Have an Effect?

Obviously if there’s so much dust that it interferes with light transmission or contrast, (a thick coating of dust would do that, not a few specks) there would be a problem. But today I’m focusing on when that big old dust spec right in the middle of your lens might show up in a picture. Multiple internet posts say the following (but never seem to have pictures to demonstrate it):

According to internet wisdom, then, a wide-angle lens, stopped down, and focusing on a nearby object might show some evidence of dust in the image, especially if the dust is near the rear element. Probably won’t, but since I’ve never seen anyone try to demonstrate these things and we had a lot of dusty lenses waiting for Aaron to open them up and clean them out last week I thought I might try.

OK, here you go. This is a Canon 85mm f1.2, a lens notorious for getting dust in front of the back element where, according to the above theories at least, it is most likely to show up in a photograph. It’s a difficult lens to open, and I have to admit we let the 85 get dustier than most before cleaning them, and this was by far the dustiest of our 60-odd copies. All that dust is inside the lens under the glass, which had just been cleaned. 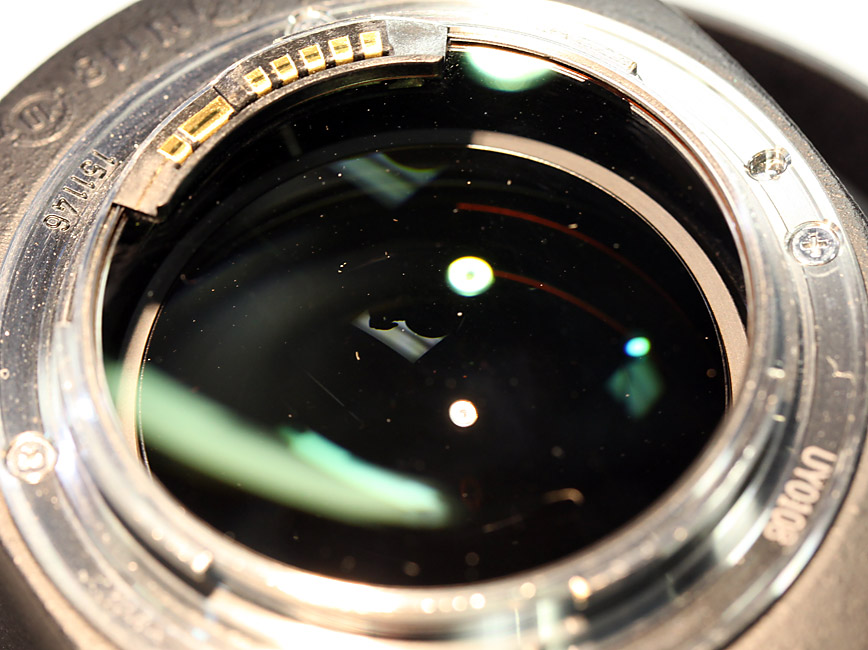 Rear element of a Canon 85mm f1.2 with Megadust

Hoping to accomplish something that we’ve rarely been able to do (make an image showing lens dust) I stopped the lens down to f/16, focused at near focusing distance on a gray wall, and shot away. I think I may have gotten one area of dust to possibly show up in the image below, but I marked it with a red arrow because otherwise you’d miss it. (BTW – this is a crop of the left half of the image, if I shrunk the whole image enough to fit here, the sort-of spot disappears entirely.) I double checked that it wasn’t sensor dust with another lens, and could reproduce it with this one, so I think it’s real. But it certainly is not visible at f/11 and not very impressive at f/16. I can’t imagine you could really notice it in a photograph. 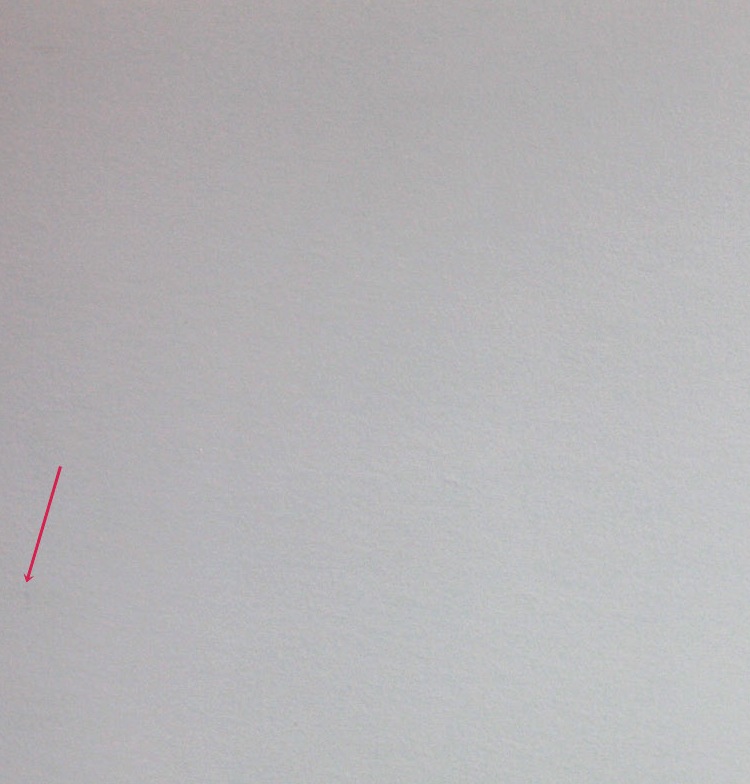 Probably, possibly a dust spot showing up from the image above. I think.

Well, that was the dustiest lens we could find and it wasn’t very dramatic. So we started trying more dramatic things. Blowing dust onto lenses, putting dots of marker ink on the element – nothing really showed up. Finally we found something that would show up: pieces of sticky notes about 3/8 inch in diameter. So here’s the takeaway message: if the dust is much smaller than the pieces of sticky note on the front element of the lens below, chances are pretty much 100% you can’t see them.

But of course, having spent half an hour finding something that what would show up in pictures, we put some of those on the front element of that same 85mm f1.2 and took some pictures. 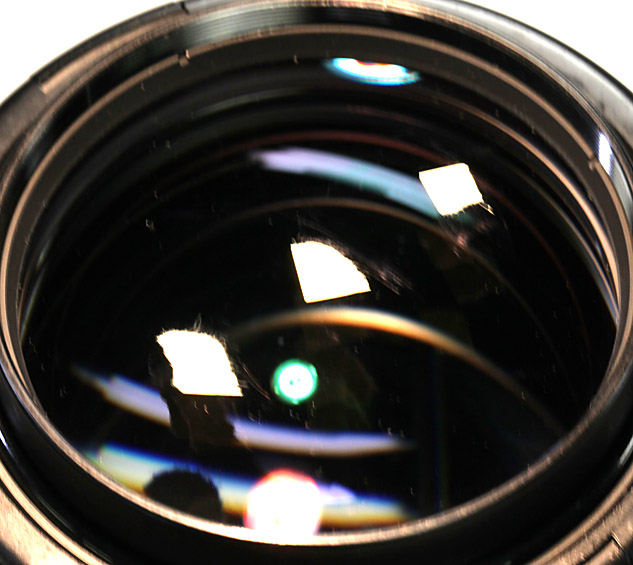 Three sticky note pieces on the front of an 85 f1.2

First let’s see what effect changing the aperture had:

At f/2.0 there may be a subtle effect on image quality, but I can’t see it. About f5.6 we started to see a bit of shadow and by f/6.3 (middle shot above) you can definitely see some shadows from stickies in the center, upper left and lower right corners.  As you can see I took the f/16 picture against a gray wall to clarify how poorly defined even a large sticky is on the front of the lens. Nothing like the sharp dot you might see with sensor dust. OK, this seems to prove that stopping down will make a foreign object on the front element more visible.

What if we put the sticky on the rear element?

3/8" Sticky in center of rear element

This time it’s clear there’s something wrong at f4, and by f/7.1 it’s very clear there’s an object blocking light. Compare how you can tell even the rough shape of the object on the rear element at f/7.1 but on the front element the shape was very vague even at f/16. This certainly seems to agree with what everyone says: a foreign object near the rear element is more likely to show than one near the front element. But remember that’s a big piece of sticky. You sure aren’t seeing any of the 20-odd dust specs on that rear element from the first picture.

Does the Lens Focal Length Matter?

Well I didn’t want to make this an exhaustive test, but I thought I could at least compare a Canon 24 L to the 85. We did that, both shots at the same distance from the target and at f6.3 below: 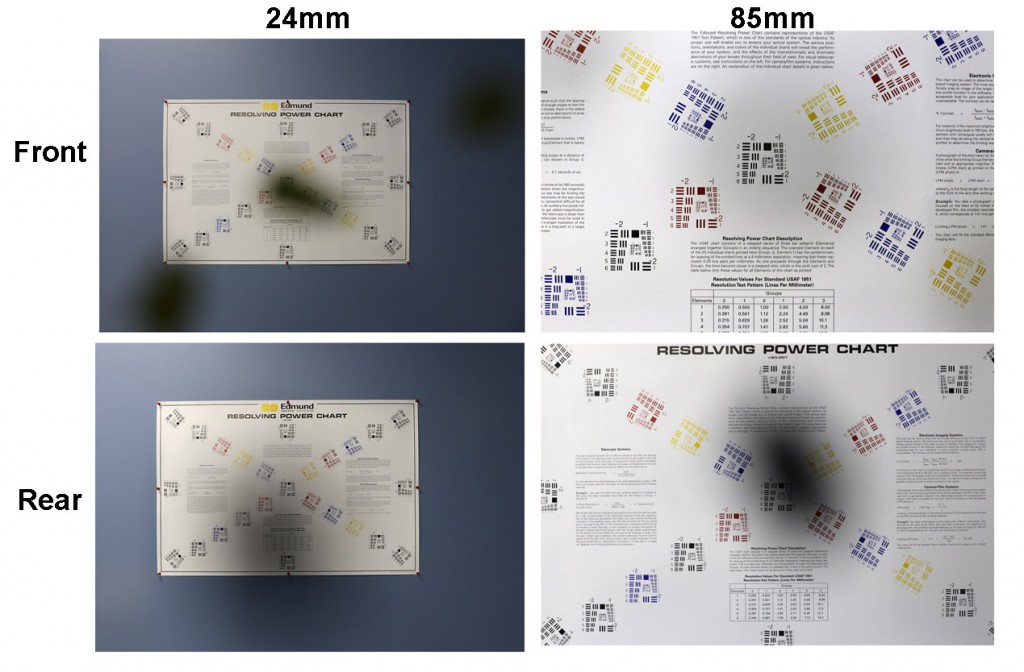 Interesting: The stickies on the front element are far more apparent on the 24 than on the 85, which goes along with common wisdom that a wide angle is more likely to show it than a longer lens. But on the rear element the 85mm lens shows up much worse (although both are obvious).  So perhaps front element dust is more critical for wide-angles, and rear element dust more critical for normal or short telephotos?

My guess (and I didn’t do enough of these to do more than guess – we have a fairly short attention span here at Lensrentals) would be that the reverse-telephoto construction of a wide angle lenses will make the rear element less critical, since light is still bending at the rear element. The depth-of-field argument doesn’t make as much sense, since the rear element is only about 5 cm behind the front element.

I won’t waste a lot of bandwidth posting more images, but we did find that front element stickies were a little more evident at closeup distances than far away, but the difference was pretty subtle. Not nearly as pronounced as a change in aperture with either of these lenses (or even with a 100 Macro, just to see if really close up made a difference). So focusing closer did make the foreign body a bit more obvious, but not nearly so much as stopping down the aperture did.

So what did we learn today?

Remember, though, that what we really did here was look at big objects on the front and rear element of the lens. Internal dust might behave a bit differently if it was near the focal plane of the lens internally, or perhaps just in front of or behind the aperture. I’m not so curious that I’m going to take a lens apart and put a sticky note on an internal element and reassemble it to take test shots. Not yet anyway. Maybe in the winter when things are slow.

Does any of this have any real world implications? Nah. Unless you get a bug inside your lens there’s not much need to worry about dust. Until there’s so much dust that it interferes with contrast or light transmission. When is that? Well sounds like another article coming up, doesn’t it? But it would be a lot of dust.

Tweet
Posted in Lenses and Optics
Photo Lenses for Video: There is no Free Lunch.
Lens Genealogy Part 1