Are Zooms Always Sharper at One Extreme or the Other?

There is a statement often repeated about zoom lenses, which I have assumed to be generally true, or at least historically true.

“All zooms are sharper at one end than the other.”

I also hear a lot of people saying they bought Zoom A because it’s sharper than Zoom B. Is that sharper everywhere? Just at the long end or the short end or the middle? I know a lot of people shoot their 70-200 f2.8 lens at 200mm 90% of the time. So did they buy for the sharpest at 200mm? The sharpest in general? A lot of others have both 70-200mm and a 24-70mm zooms in their bag. So which one is better at 70mm? You get my point: people are quick to make a broad statement like “Zoom A is sharper than Zoom B” without having a lot of facts to back it up.

Like most photographers, I understand things better when I can see them, rather than just read about them. So I thought I’d use some of our Imatest data to look at this well-known truth (which isn’t as true as people seem to think). I’ll also provide you some links where you can find more specific data concerning how much zoom resolution varies with focal length.

So are They Sharper at One End?

Well, the answer turns out to be: sometimes. Perhaps it was true for all zooms some years ago, but it is no longer an absolute rule. Zoom lenses have only been around for 40 or 50 years – compared to prime lenses they are a relatively new technology – and they have benefitted much more from computerized lens designing processes.

In case you aren’t aware, technical review sites like SLRGear.com and DxOLabs.com do make careful measurements of resolution at different focal lengths and present the data in a nice graphical fashion, although many people don’t seem to take advantage of that offering. My contribution isn’t nearly as detailed for a given lens (I’m not a lens reviewer, I don’t have the patience), but does give data from multiple copies to give a somewhat broader picture, looking at multiple copies of a few popular zooms. But you can use the links above to look into the specific lenses you’re interested in. 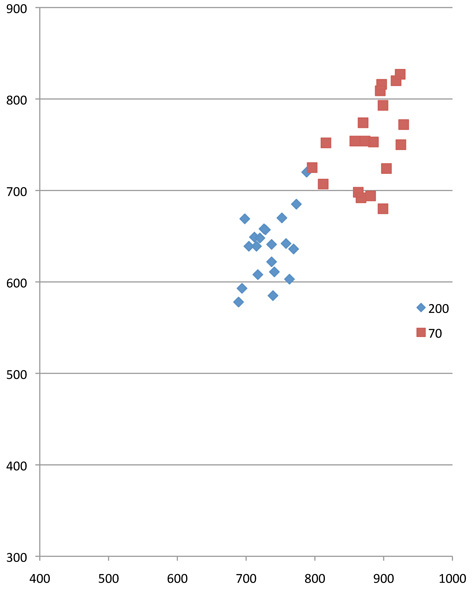 It’s pretty obvious that the lens is sharper at 70mm than at 200mm. This isn’t news; both DxO and SLRGear saw exactly the same thing in their analysis (and their graphs give measurements at various apertures and multiple focal lengths – very nice). So in this case, clearly, there is a difference at different focal lengths. 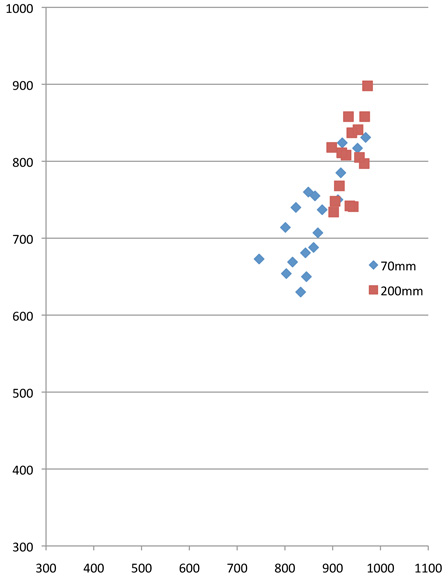 I should point out that now the red boxes are now the 200mm focal length the opposite of the first graph because my graphing program takes the sharper set of data first by default and I was too lazy to change it around. You can see that the newer lens is at least as sharp at 200mm as it is at 70mm, maybe even sharper. SLRGear found the same thing in their test of this lens.

The newest version of the Nikon 70-200 f2.8 VR II (below) shows almost no detectable difference between 70mm and 200mm. Which, again is what SLR Gear found when they tested it. So in the telephoto zoom world, it appears recently designed lenses have very little change in resolution from one focal length extreme to the other. 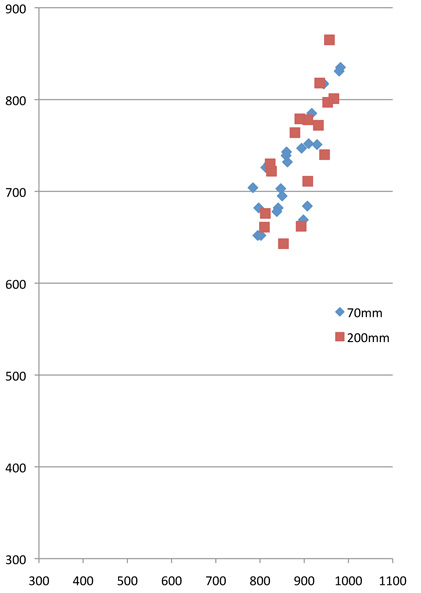 So it appears that while the older designed 70-200 f/2.8 lens was clearly sharper at the wider end, two newer lenses are equally sharp at both the wide and telephoto end.

Looking at some standard range zooms; the Canon 24-105 seems a little sharper at 24 than at 105mm. SLRGear.com agrees, while DxO mark saw little difference. With this lens, particularly, copy variation probably explains the difference: looking at the graph below there are obviously some copies that are about equally sharp at both ends, some others a bit sharper at 24mm. 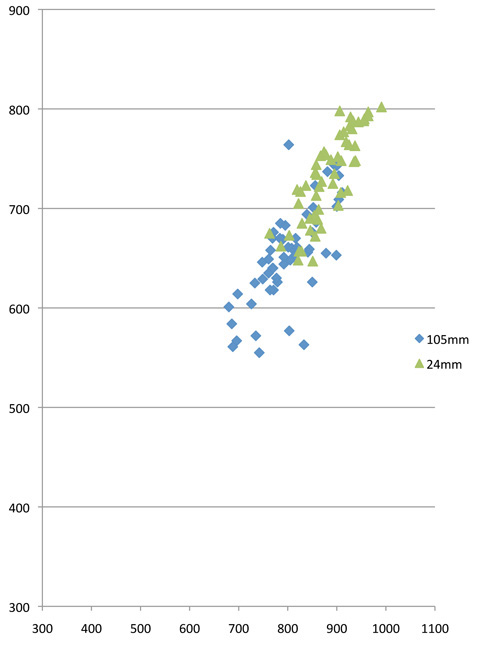 Interestingly the Canon 24-70 seems about equal at both ends in my most recent test. I say interestingly because this graph reflects our results after having 19 copies that were bad at just the 70mm end repaired as I discussed in my last post. If I had done the test before that, the 70mm end would have seemed significantly softer on average. Some online reviewers have found the 24-70mm f/2.8 Canon is softer at 70mm, others have not. The difference may simply be copy variation again. 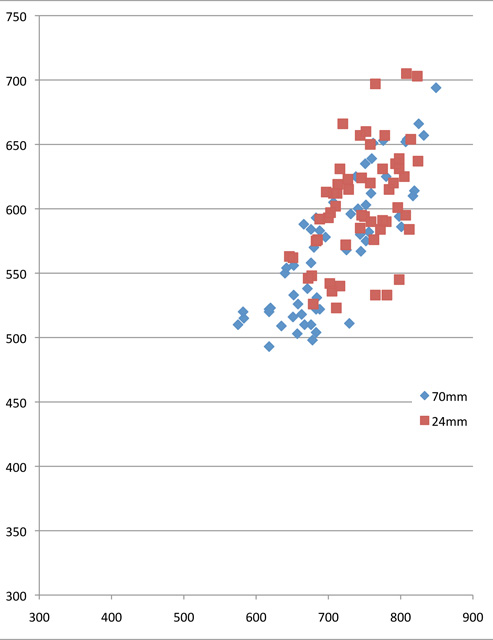 Not much, probably. But perhaps before you make your next lens purchase you’ll spend a little time looking at how the zoom performs at different focal lengths. Oh, and the next time you shoot portraits at 70mm, you might consider reaching for the big lens rather than the standard one.

Tweet
Posted in Lenses and Optics
The Limits of Variation
Stop it Down. Just a Bit.