Autofocus Reality Part 2: One vs. Two, Old vs. New

The first part of this series confirmed what we already new: Live view focus is more accurate than phase detection AF.

This part is going to (sort of) look at something I’ve wondered about along with some related old wives’ tales. And unlike the first article, at the end of this we’ll have learned something today. 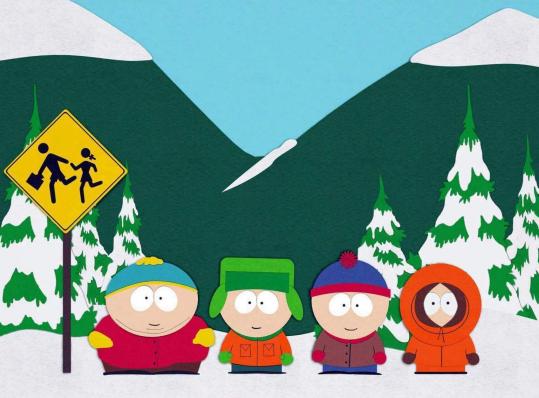 That something I’m wondering about is this: How much of a feedback loop is there between the camera and the lens? It might be that the system has totally one-sided communication:

Camera: OK, I see you’re focused over here, I’m sending you a signal to focus over there. Then I’ll take the picture.

Or there could be a feedback loop of rechecking going on like this:

Camera: I see you’re focused over here. I’ll send you a signal to focus over there.

Camera: Well, not quite. You’re still off a bit. I’ll send you a signal to go a little bit this way.

Lens: OK, I’m there. You should have gotten this right the first time.

Camera: No, you didn’t move where I told you to. We’re really close now, just a bit this way.

Lens: Who put you in charge anyway? OK, I’m there.

Camera: Yes, that’s perfect. I’ll take the picture. And next time just do what I tell you the first time, OK?

Lens: Why don’t you get things right the first time? I moved where you told me. You’re using those off-center sensors again, aren’t you? Like those things ever work!

We’re really not certain which way the phase detection AF systems in various cameras work. Most likely it’s something in between those two examples. But it might be different with different bodies or different lenses. Some of the lenses in current use were designed 20 years ago and autofocus has been making a lot of advances since then.

If you believe scenario No. 1, AF may be more accurate if you “double focus”, meaning you push the shutter button halfway down until the AF beeps, then release and push it halfway down again. The idea is that you’re providing the camera a “recheck”of the AF point and a chance to fine tune focus.

I was taught to do this when I started photography but I have no idea if it really helps. So I thought we’d look at that using the same lenses we did in part one, the Canon 50mm f/1.4.

If the two-click AF method works better than one-click AF, that might give us some indication that the system is open and without feedback. Maybe. If it isn’t I’m not sure it means there is a feedback loop. Maybe AF is as accurate as it gets no matter how many times you pre-focus.

The last post showed that LiveView Contrast-Detection autofocus and my manual focus were about equal with the 50mm f/1.4 but that phase-detection AF was more random.

Even before the numbers were processed I was pretty sure I knew what the answer was going to be. In watching the distance scale as I pushed down the AF button halfway and held it, I could see on some shots a quick, second movement of the scale before the focus confirm beep occurred.

I was pretty sure this indicated the lens and camera were talking to each other, meaning there was a feedback loop going on. The results shown below certainly demonstrate that pushing the button several times was no better than pushing it once. First is a typical 50mm f/1.4 on 5D Mk II graph (we did several and all were about the same). 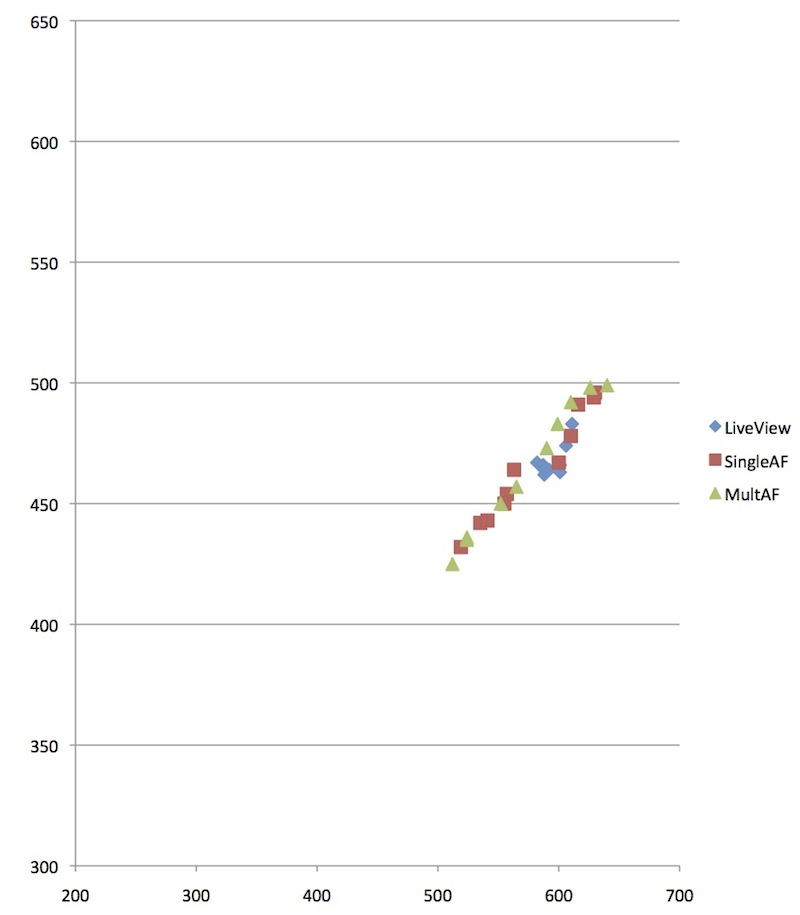 We tried the same lenses on a 5D Mk III to see if the newer focus system made any difference. We didn’t expect it would on single-point center AF with a still target in great light. However, the 5D III AF system is much better than the II. But this testing situation isn’t meant to show off advanced AF features, just basic center point accuracy. 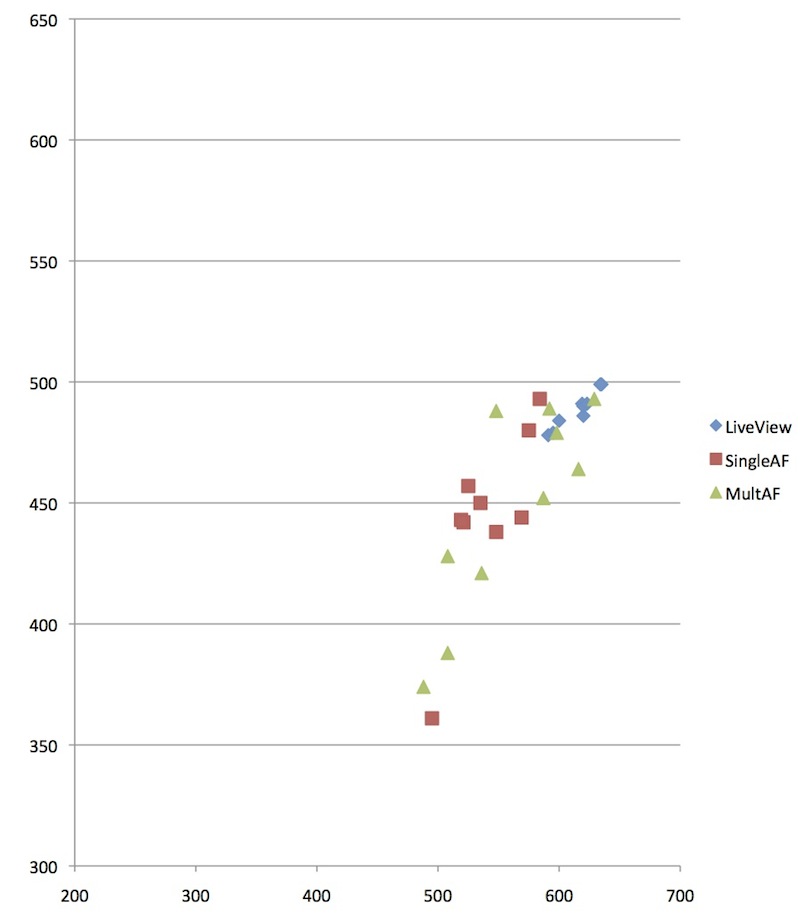 This one looks a little worse at a glance because this lens-camera combination could have used a bit of microfocus adjustment for backfocus, but certainly the single focus / multiple focus shots are not different.

Again we did this several times and the standard deviation of the results was the same for each camera with no difference between multiple focus and single focus.

What does it mean? Well, I can quit pushing the button multiple times to focus. I believe there is a feedback loop that the camera is repeatedly checking focus as things get close, but that’s just what I believe. I don’t think this proves it.

The Canon 24mm f/2.8 lens was released in 1988 making it one of the oldest designed Canon lenses available, while the Canon 24mm f/2.8 IS USM was just released this year. So basically we set up to do the same type of tests comparing those two lenses.

First we put the old version on a 5D Mk II. Note that the scales are different. Since we’re now shooting f/2.8 lenses the resolution is higher. Depth of field is also a bit greater but we assumed we’d have little trouble seeing changes in sharpness from focusing, and that was the case. 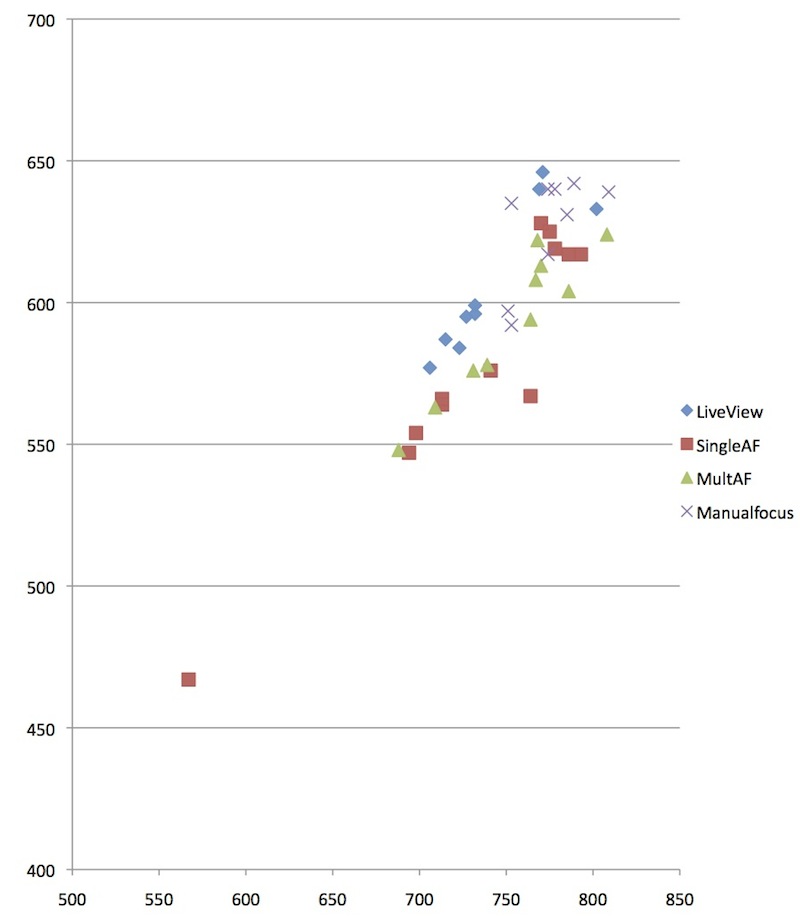 The only real difference is both manual and live view focus are a bit less accurate than with the 50mm lens. The lens has some spherical aberration and I certainly realized I was having a bit of difficulty focusing myself.

Apparently the camera did, too. Phase-detection AF is about the same as with the 50mm lenses, but it appears better largely because LiveView and manual focusing are worse. 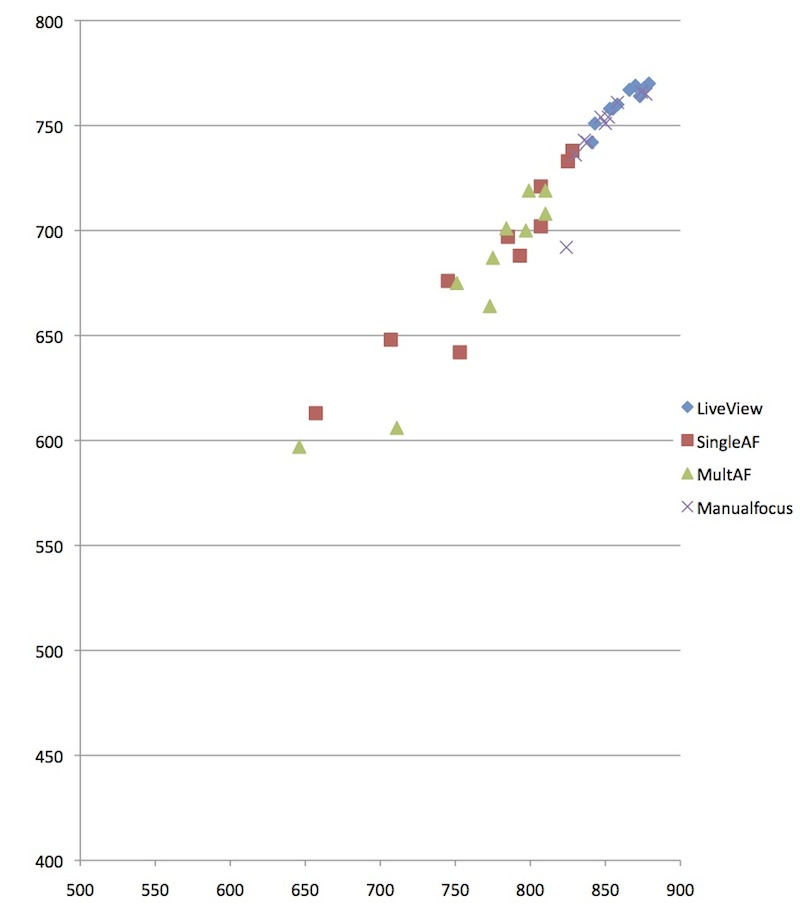 Both contrast (LiveView) autofocus and I did much better with this lens. Camera autofocus did not. Again, this lens is backfocusing just slightly, which is why the average resolution is a bit lower.

Repeating the test with different copies of the 24mm and 5D Mk II didn’t change things at all. Neither did shooting the old version of the 24mm on the 5D Mk III with its new autofocus system.

Just to make everything complete, we mounted the new 24mm f/2.8 IS USM on the 5D Mk III and repeated the test. You’ve looked at the graphs, one after another, all the same.

I gathered the data not only from the graphs I’ve shown but from other copies we tested. So at this point, you can imagine how shocked I was when something different happened. So I repeated it with different copies of the 24mm IS USM and 5D Mk III and got the same results. 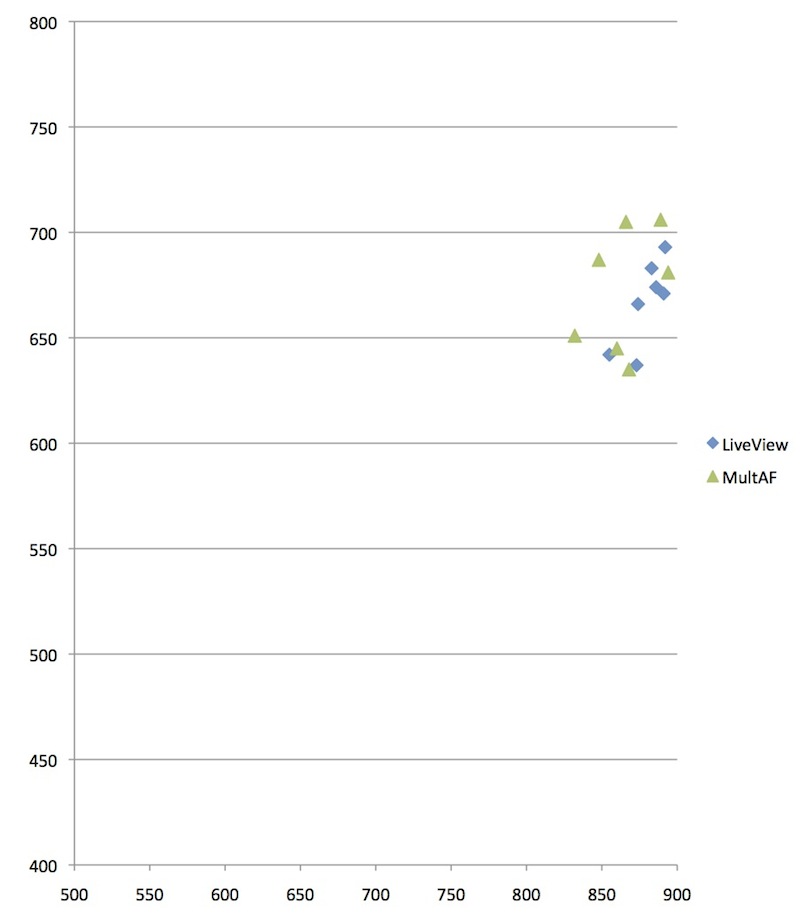 It appears, and I’ve repeated the test on several copies, that the combination of new camera AF system in the 5D III and new lens makes a huge difference.

In this case, phase-detection AF is just as accurate as LiveView. I didn’t put the numbers up to keep the post reasonably brief, but manual focusing and single-shot AF were just about the same for three different copies of the lens.

So What Does This Mean?

I’m not sure. It certainly seems that there are some camera-lens combinations that have more accurate phase-detection AF than others—when using center-point AF on a test target. It may actually be a big deal.

A given manufacturer is always going to say “new, more accurate autofocus” with a new model of camera. They don’t have much motivation to add things like “on some lenses.”

We reproduced the finding with a different 5D III and a couple of other copies of the 24mm lens, but perhaps there’s some other explanation I haven’t thought of.

I’ll feel more certain if some of the other new lenses do the same thing on this camera, and we’ll get that tested right away. I think the 28mm f/2.8 IS should certainly behave this way, and possibly the 40mm f/2.8.

Since we’ve only seen this on the one lens-camera combination I’d rate it as “probably, not certain” in accuracy. Since I had planned this as a series of posts, I’m posting them as I do them.

So you get to follow along, and we’ll see if I’ve discovered something new or if there’s just an odd red herring in my autofocus findings.

I was supposed to be doing constructive work today, but I couldn’t stand not confirming what I saw above.

Although we’d done three copies of the 24mm lens on different 5D III copies, I wanted some more confirmation. It seemed logical that if what we were seeing was real, then the new 28mm f/2.8 IS would also AF more accurately on the 5D Mk III.

I was able to repeat the test this morning on three copies of the 28mm lens on a 5D III. I’ve printed two examples below with the axis expanded to emphasize differences. As you can see below the 28mm, just like the 24mm, is as accurate with phase-detection AF as it is with LiveView AF. 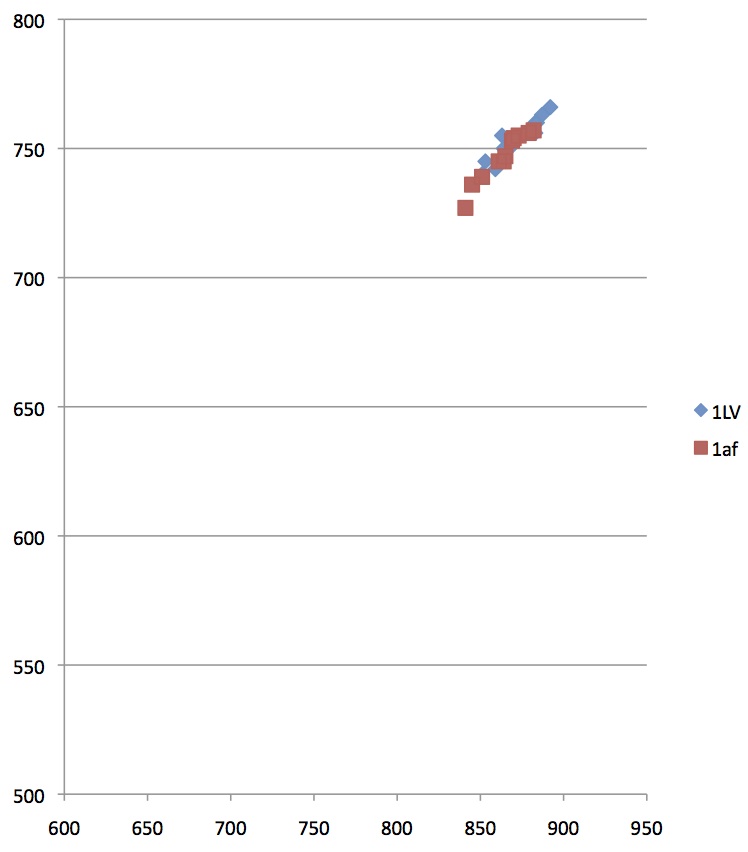 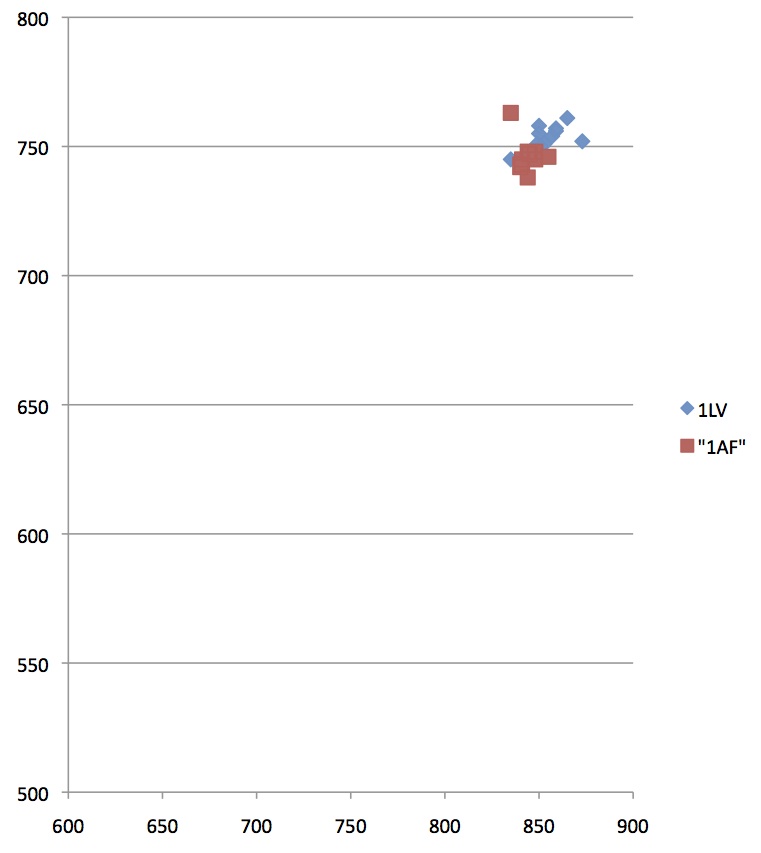 Obviously our next step will be running through the rest of the newer Canon lenses to determine which other ones have increased accuracy.