I’ve been waiting for the Panasonic 35-100mm f/2.8 OIS lens since, well, since the Panasonic 12-35 f/2.8 lens came out. Much to my surprise, Tyler had 7 copies sitting on my desk this morning. As usual when something like this arrives I only had a few hours before the packers would start screaming for them since they were mostly rented already. But that was enough time to do a quick set of Imatest and play around with it a bit.

For the purists who are going to point out the real name is the Panasonic 35-100mm f/2.8 XOIS, I think we’ve reached the point where we can assume any product remotely connected with photography has an X in its name somewhere. Maybe if we all quit mentioning that letter, they’ll stop using it. Twenty years from now, young photographers will make fun of us old-timers by saying things like “you’re still shooting with X equipment, aren’t you?” A century from now they’ll describe the timeline of photography as the wet plate era, the film era, the digital era, and the X era.

But I digress. As usual. Back to the topic.

As always, I’ll start with my expectations. To me, these are “all in” lenses for m4/3 shooters. Those using m4/3 as secondary cameras, for the most part, aren’t going to invest quite this level of $$ in glass. Serious photographers who use m4/3 as their primary system, though, have been waiting for SLR-quality f/2.8 zooms. They may not be thrilled with the SLR-like price tags, but they’re willing to pay them.

A very nicely made lens (and no, I haven’t taken one apart yet). But it’s sturdy and comes with a nice hood in the nice nylon Panasonic lens pouch (take a note, Olympus). The zoom and focus rings are smooth and easy to use. The size was a pleasant surprise, not too large for the cameras it will be mounted to and the weight nicely balances on either camera we used.

Focus was quick and accurate on both the OM-D and the Lumix G5. We couldn’t tell any difference with single-shot focus, although continuous focus seemed quicker on the G5. From a look-and-feel standpoint, it’s a definite winner.

First, let me point out that our Imatest results are shot at 15 feet (35mm) and 40 feet (100mm). I mention that first because several of us felt, while just shooting around, that the camera might have been a bit sharper close up than it seemed at infinity. Since our optical bench still isn’t standardized to my liking, we aren’t able to test at infinity.

Imatest, however, does tend to support part of what we noticed just shooting around. At 35mm the lens is awesomely sharp; every bit as good as the 12-35 f/2.8 OIS is at 35mm. That means it’s as good as most primes, or at least in prime territory as far as resolution goes. It holds up well right out to the corners.

There was a slightly different story at 100mm, though, where resolution dropped significantly (100mm mtf 50 is 86% of what it is at 35mm, hence the article title). This is still good, but it’s not what I was hoping for. I’ve already got a sharp f/2.8 zoom at 35mm. The difference is worth showing in chart form since it’s quite consistent with all 7 copies I tested. 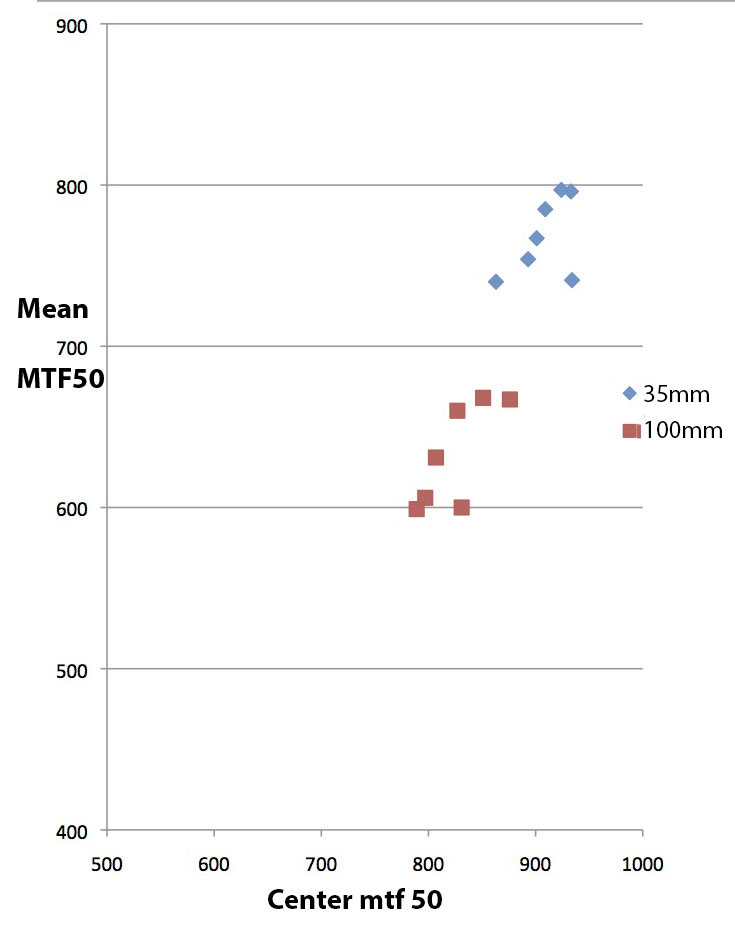 Time constraints prevented me testing at other focal lengths, but visually the lens seems to start softening about 70mm or so.

I should point out that the numbers at 100mm and f/2.8 are still pretty good, easily better than any other zoom at 100mm. It also is reassuring that stopping down to f/4 sharpens the 100mm end up dramatically; it’s just as sharp as the 35mm end at f/4. 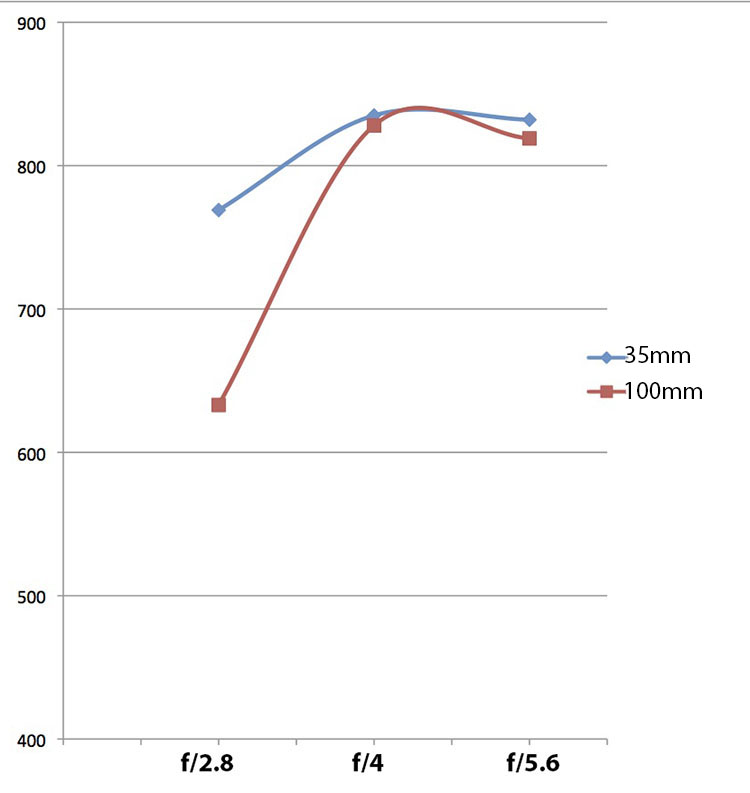 Average resolution at various apertures. At 35mm the corners get a bit sharper, but that’s about it, as you stop down. At the 70mm end the lens sharpens dramatically by f/4.

Well, it didn’t quite meet my expectations, at least not at the 100mm end which is where my main interest was. But I’d set the bar pretty high.

On the other hand, it is certainly the sharpest m4/3 option I can get at 100mm, particularly stopped down to f/4. So I guess whether it met my expectations really isn’t important. It’s easily better than any other option, so I’ll be grabbing one. But I’ll probably whine about the price a bit.