Another 35mm Lens for Canon

It seems we had barely finished testing the new Sigma 35mm f/1.4 lens when the first shipment of Canon 35mm f/2 IS lenses arrived. I’d describe my feelings as more interested than excited. This finishes (I think) the Canon wide-angle IS consumer-grade lens trilogy.

We’d found the previous members, the Canon 24mm f/2.8 IS and Canon 28mm f/2.8 IS good lenses at premium prices. We had some interest in the Canon 35mm f/2 IS, although I have to admit that Sigma’s preemptive strike with an excellent 35mm f/1.4 at almost exactly the same price had dampened that enthusiasm a bit. For those of you who don’t have a scorecard handy, this is the current autofocus lens lineup at 35mm if you’re shooting Canon.

OK, let’s start with a comparison shot in the Luxurious Lensrental’s Lab (yes, that is indeed an authentic particleboard work table). The new Canon 35 f/2 IS is a bit bigger than I expected, and has a plastic barrel, but seems solidly made. I’m not sure it’s meaningful, but the 6 people here who’ve handled it to a person commented on the manual focus ring feeling a bit different. Several said, “It feels like a Nikon lens” which isn’t a bad thing, just different.

We did our usual Imatest work today, but also are going to look at some results from our new optical bench that we’ve been testing. This gives us, in addition to our Imatest results, the ability to evaluate lenses focused at infinity, test without using a test camera, and access to some data we haven’t had before. 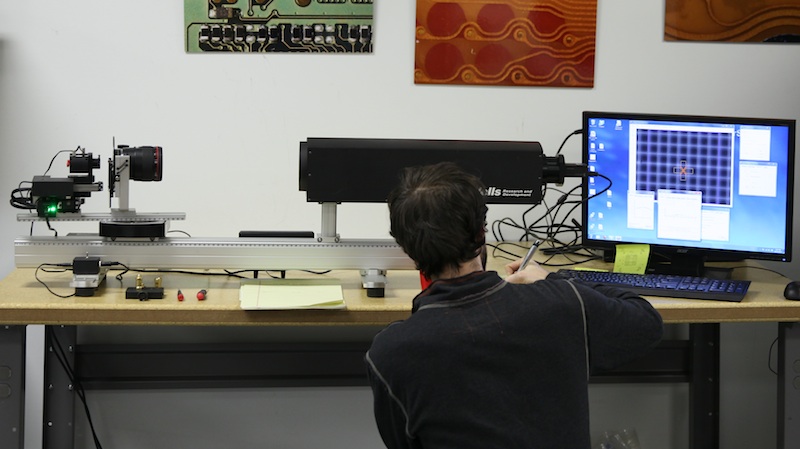 Aaron, pretending he knows what he’s doing at the Wells bench.

As always, this isn’t a review; I’m not a lens reviewer. It’s the results of putting the lens through our normal intake tests. Well, and this time doing a few extra things in the name of further education.

Also, as always, my summary comes first, for those of you who have trouble reading more than 150 words without a picture.

On To the Tests

First I’ll put up our usual graph of Imatest results. These were all shot at f/2 to equalize things. Center sharpness is the horizontal axis, 13 point average sharpness the vertical axis, measured in line pairs / image height from 5D II raw files.

The biggest reason I included this graph was as an example that bad lenses are really different then lens-to-lens variation. You can see one of the 35mm f/1.4 lenses was bad, all alone down there at the bottom. How bad? You would have passed it looking at an online-size jpg, but at 100% on a monitor it was clearly not sharp. 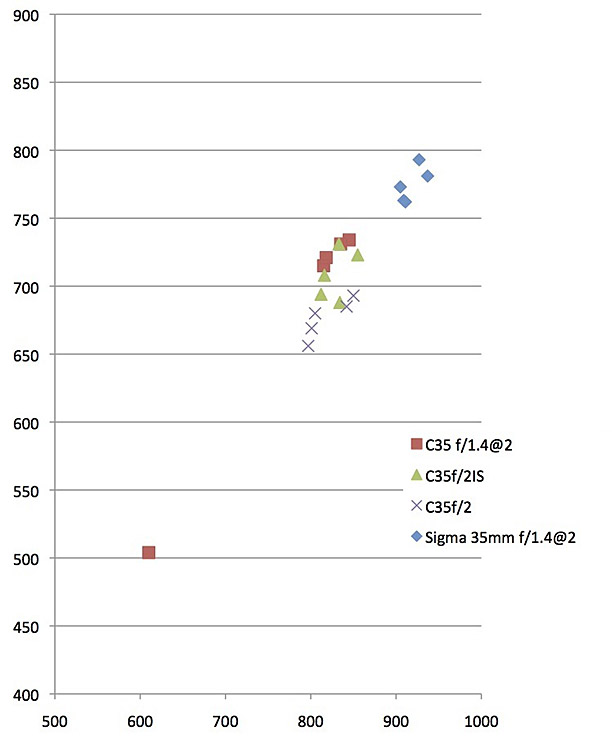 From a resolution standpoint it is pretty clear that the Sigma 35mm has the best MTF50. The Canon 35 f/1.4 L shot at f/2 maybe is a bit better than the new f/2 IS which is probably a bit better than the old 35mm f/2. They’re all close, though, that may just be hair splitting. But charting the numbers (throwing out the bad 35L, of course, and replacing it with a good copy) provides a bit more detail.

Looking at the average (mean) for center, average, and corners shows a bit more about the lenses. The old 35mm f/2 does quite well in the center and mid-lens areas, but it’s pretty awful in the corners. The new 35mm f/2 IS and the classic 35mm f/1.4 L do much better in the corners, with the 35 L (stopped down to f/2) clearly better than the new f/2 IS. But the Sigma does better than any of them.

As always, remember these are just one measurement of resolution. There’s a lot more to a lens than resolution, of course.

One other thing that’s interesting is to compare sagittal and tangential MTF lines from center to corner on the lenses. Below are the measurements for Canon 35mm f/2 IS and the Sigma 35mm f/1.4. Notice that these show MTF30, not MTF50 as we reported above, so the numbers are different. I didn’t put the graph of the Canon 35L up, but it’s nearly identical to the f/2 IS graph below. 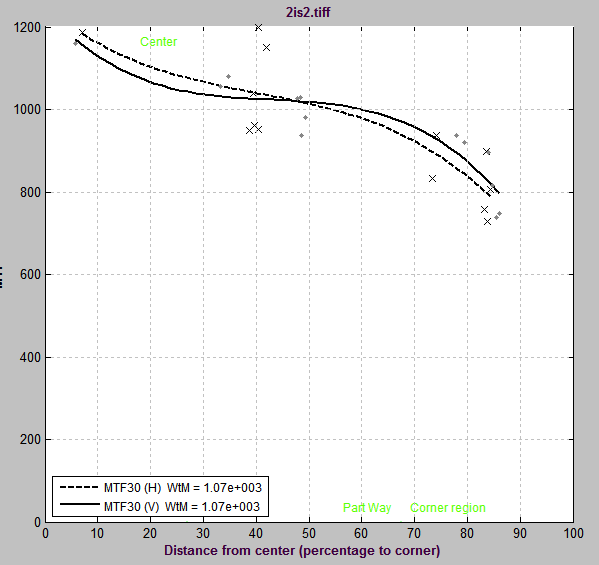 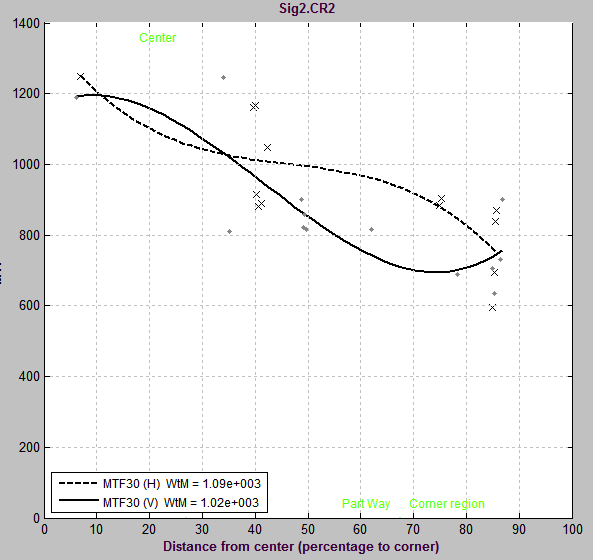 Notice the Canon horizontal and vertical lines are very equal and even, while the Sigma shows much more astigmatism (this is true on multiple copies, not just the one used in the example). I’m not the world’s authority on such things, but this may well explain why some people are finding the Sigma’s bokeh (out-of-focus highlights) less attractive than the Canon’s. Hopefully some of the readers who are more bokeh knowledgeable than I will comment on this.

On the other hand, here’s one of the interesting advantages of being able to also test at infinity now. Below is a graph of MTF at various frequencies from the optical bench, so this is at infinity, rather than 12 feet like Imatest result above was. This shows the Sigma (on the left), with almost no astigmatism at infinity.

It will be interesting to see if bokeh appearance varies with shooting distance with that lens. It may not, of course, there are lots of other factors that contribute to bokeh.

Don’t ask me about the 35mm f/2 original version because I didn’t check it. I really do have stuff I’m supposed to do besides play with the testing equipment and new lenses.

I’m afraid this is a rather dull and boring post that doesn’t tell you anything you probably hadn’t already assumed. If you like to shoot 35mm and need Image Stabilization for the type of shooting you do, this will be a very nice lens and worth the money. Otherwise, you’re probably better off with something else.