A lot of people have been waiting on the release of the Canon 24-70 f/4 IS, deciding which of the new lenses they wanted, or whether they wanted to upgrade at all. So, when the first batch arrived early this morning we were set up and waiting to do some resolution testing.

Let’s take a look at how this group prices out (these are today’s retail prices, but I expect you can get $100 or so off each of them fairly soon).

We’ve previously compared the Mk and Mk II Canons in depth, and compared them to the Tamron f/2.8 VC. A couple of conclusions are already apparent:

I try to identify my expectations going into an evaluation. In this case, given the price, the 24-70 f/4 IS will need to be a better lens than the Canon 24-105 and at least as good as the Tamron at f/4 to justify its price. I’ll go further and say it should be better than the Canon 24-70 f/2.8 Mk I at f/4 as well. Anything less would be a failure.

This isn’t a lens review. I am not a reviewer. I don’t spend days evaluating a single copy of a lens for all of its traits and characteristics, nor do I take hundreds of really great photos with it and describe how it works in the field. Several of the lenses I tested today are on the way to people who will do just that and their thorough reviews will be available in a week or so.

What I do is test multiple copies of the lens for resolution and other basic stuff. Multiple copies lets us take sample variation into account to some degree, which a thorough review of a single lens can’t. 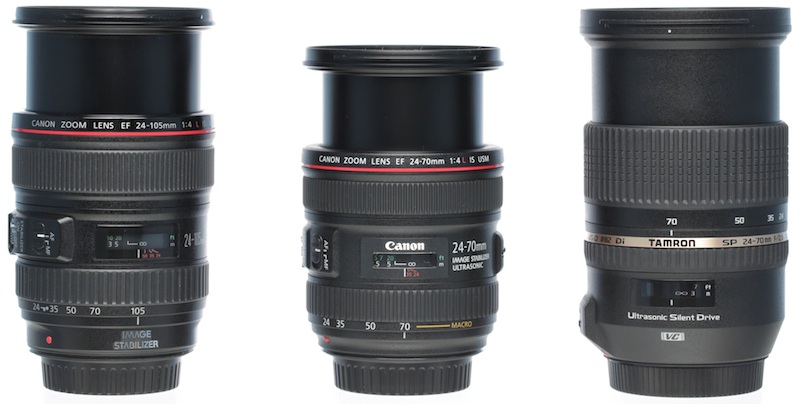 And with barrels extended

It’s also significantly shorter than the 24-105 f/4 IS – although they actually look quite alike. I’ll add that I really, really, really like the pinch cap on the new lens, which makes it easy to remove the cap even with the hood mounted. 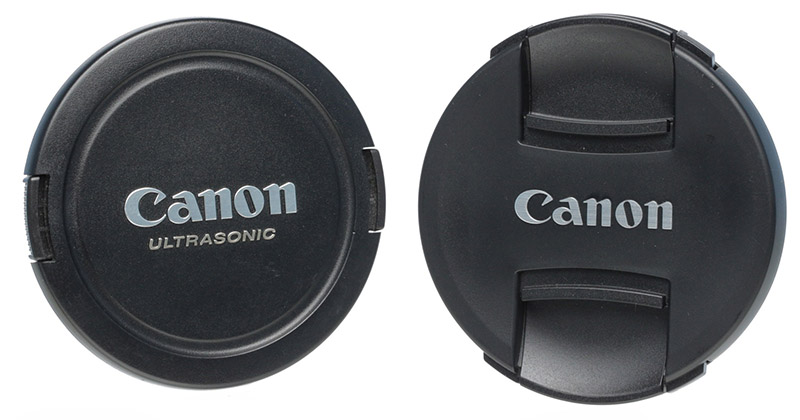 Not really part of our usual testing here, but the 24-70 f/4 IS has a special switch that allows it to become a near macro (0.7x) at the expense of losing infinity focus. While I usually think of ‘macro zoom’ as a marketing gimmick (and I’m still not sure about this one), Canon did put their Hybrid IS unit in this lens, just like the one in the Canon 100mm f/2.8 IS L macro lens, so I’ll give this one the benefit of the doubt. 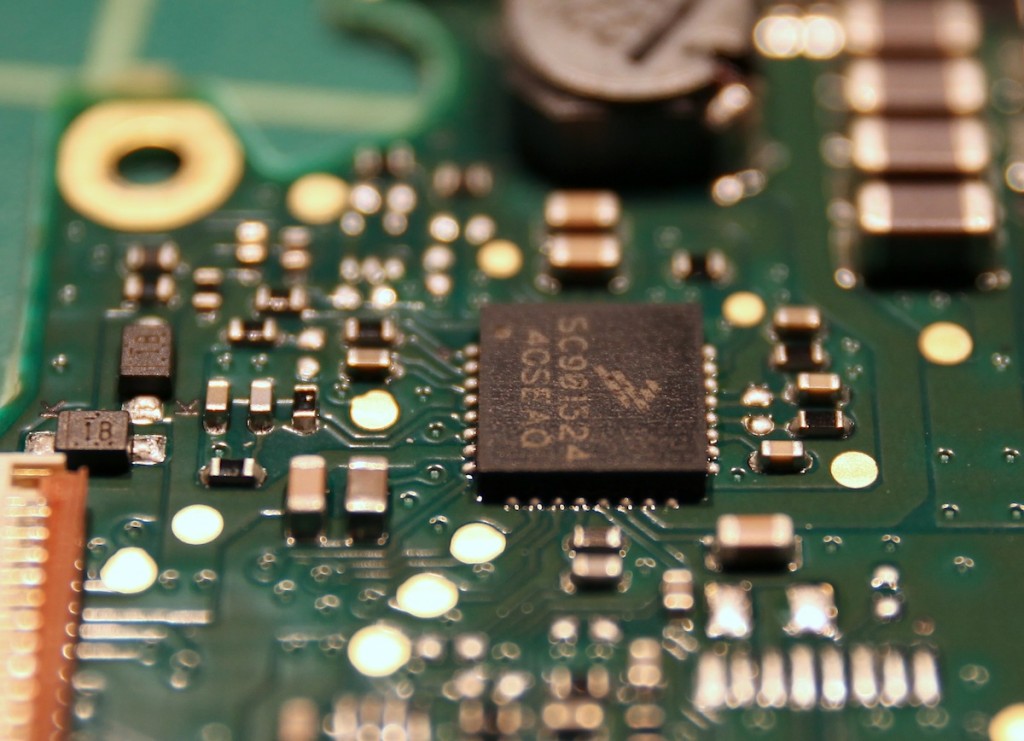 I find the macro mode and small size nice differentiators that may make this lens a good choice for some photographers if the optics are excellent. I should mention, though, that the macro working distance is quite short — about 2 inches from the front element. Getting it into macro mode is a bit clumsy as you have to hold the switch while rotating the zoom ring. But it’s a nice feature.

The f/2.8 numbers are posted elsewhere, but I’ll repeat them here.  If you’re going to pay more money for an f/2.8 lens, but mostly will shoot at f/4, it’s worthwhile knowing how much resolution you give up at f/2.8. The numbers are Imatest MTF50 values at the cener, averaged at 13 points over the entire lens, and the average of the 4 corner numbers.

The three 24-70 f/2.8 zoons are all good lenses, but it’s obvious from a resolution standpoint the Canon Mk II is the best and the Tamron between the Mk I and Mk II results.

We have 5 lenses to compare at f/4 and I’ve added corner resolution, distortion, and chromatic aberration numberes. To keep all that data organized I’l make separate tables for results at 24mm and 70mm.

One thing that is very good on the new lens is the lower barrel distortion, just under 2%. This probably is most noticeable when compared to the 24-105 f/4 IS, which has pretty bad barrel distortion right at 24mm.

I’ve graphed the center and average resolution for all 22 copies below. 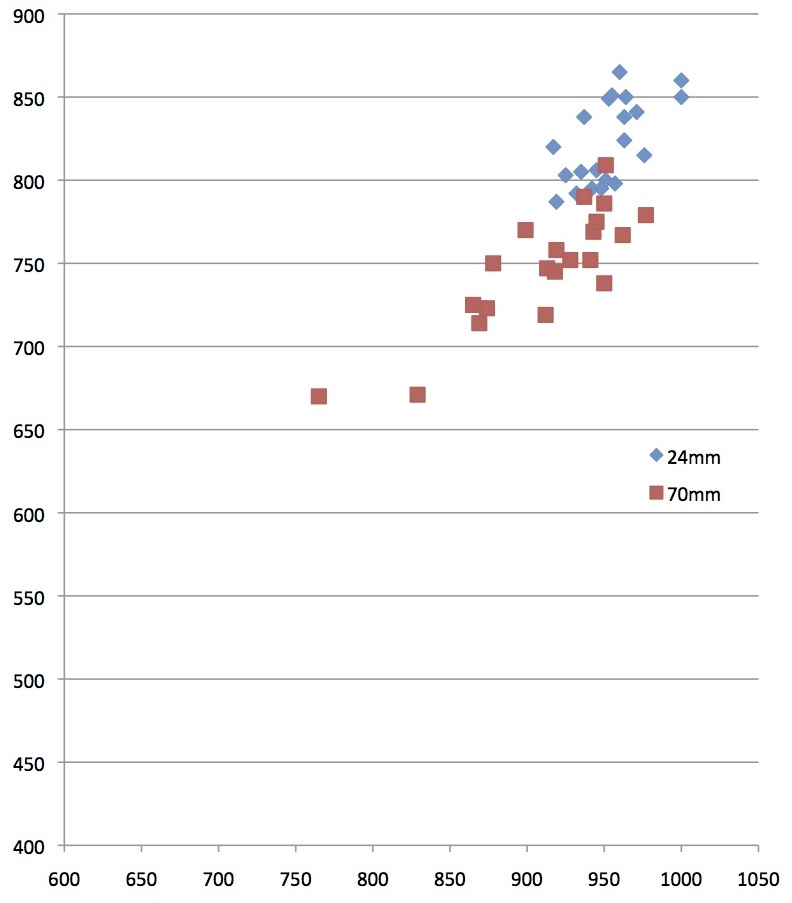 That’s a nice, tight pattern at 24mm, but at 70mm things are a bit more spread out. There are two outliers at 70mm. Further testing on the worst one shows it is clearly decentered. The not-quite-as-bad one seems to be a bit decentered as well. I will note that I took these two values out when I calculated the averages above since I want those to reflect good copies of the lens.

Twenty-two lenses is a pretty small sample to make further comments. I’ll have more to say when we have seen 60 or 70 copies.

After a head’s up from our friends at SLRgear.com and a couple of other users, who saw lower resolution in their copies at 50mm, we went back and retested a couple of dozen 24-70 f/4 IS at 3 focal lengths (24, 50, 70mm) instead of our usual two. (Most, but not all, zooms have lowest resolution at one extreme or the other, so we focus our testing there.)

We did find that 50mm resolution was slightly lower than 70mm for every copy. The center / weighted average at 50mm for the 24-70 f/4 IS was 875 / 700, compared to 920 / 750 at 70mm. Not a huge drop, but it was consistent. This is a bit surprising, but not a total shock. Some wide angle zooms exhibit similar behavior and the dip in resolution isn’t extreme.

Obviously this hasn’t told us a thing about autofocus accuracy, bokeh, or a dozen other things that have to be considered when choosing a lens. Just like you, I’ll be waiting for more complete reviews to tell us about that.

On the basis of this information, though, I’m . . .  well, I don’t know what I am. This is a good lens, but I at the price point I’d probably prefer the f/2.8 of the Tamron VC to the new Canon’s f/4. The macro feature is nice and will certainly pull some people towards the Canon.

This is only a sample of 22 copies, but the sample variation at 70mm is a bit bothersome. I don’t feel comfortable making any statements about it, though, until we’ve seen another 40 or 50 copies. This might just be a couple of bad lenses in a small sample.

My bottom line is I sit here thinking the prices need to settle down a bit. If I was considering upgrading to one of these lenses I’d probably hold off a few months and see how the prices change.