You have to hand it to Nikon. We may wait a long time for the lens improvement we want, but once Nikon announces it, they get it in our hands pretty quickly. Unlike, say, the Canon 200-400 f/4 Unicorn Bigfoot lens. I’ve been screaming for some time that this was the lens in the Nikon lineup most in need of a makeover. When I got back from vacation checking out the new Nikon 80-400mm AF-S VR was my first order of business.

I put this first because I know that 50% of people who visit this page will just scroll down to the conclusion anyway. This saves you a couple of turns on the scroll wheel. (I think 40% have already left when they realized this wasn’t a video review because reading is so hard.)

The new version doesn’t have a “II” on it, and mercifully does not have an “X” anywhere in the name. It is called simply the “AF-S” 80-400mm as opposed to the original “AF” 80-400. You won’t have any trouble telling them apart, though. The new one is significantly larger (almost as large as the Sigma 50-500 OS in closed position). As far as weight goes, the new 80-400 tips the scales at 3.5 pounds, compared to 3 pounds for the original AF version and 4.33 for the Bigma OS. 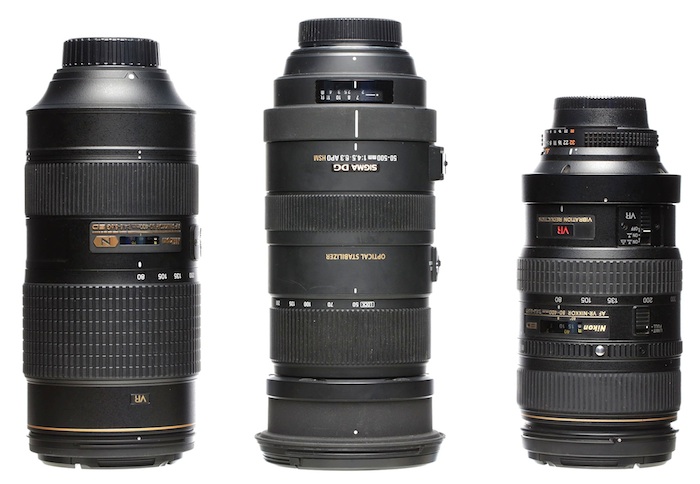 With barrels extended, though, the new Nikon isn’t quite as intimidating as the Bigma. 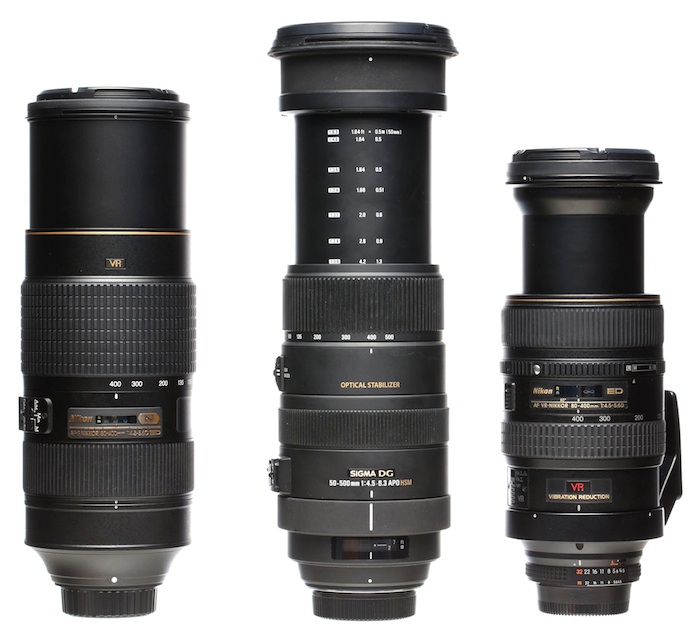 So, what all do you get with that extra half pound? Optically, the new version has 20 elements in 12 groups with one Super ED and 4 ED elements, compared to the old versions 17 elements in 11 groups with 3 ED elements. Computer generated MTF charts show better performance, particularly in the edges and corners.

Just want to say you heard it here first. The good news is the new 80-400 has an actual ring like the old version, not the foot-mounted-on-a-plate-bolted-to-the-lens that the Nikon 70-200mm VR II has (the plate is problematic and bends sometimes). The bad news is the ring is very thin. In fact the old 80-400 ring weighed 5.6 ounces, but the new one, larger in diameter, weighs just 3.2 ounces. I’m all for saving weight, but doing so on the tripod ring that will support around 5 pounds of lens and camera makes me a bit anxious.

Mounted on the lens, the ring does seems quite sturdy, so it may be an engineering triumph. Take it off of the lens, though, and you can actually bend it out of round by just squeezing it in your hand. (Of course I had to try it. It looked like it would bend.) I’m hopeful this is just a brilliant design that will save weight yet be superbly sturdy. But I’m a little nervous about it.

Both the old and new lenses are f/4.5 to f/5.6 but the point at which the maximum aperture reduces is rather different. Not that it matters often when shooting this type of lens, but the older version actually has a bit wider aperture through most of the zoom range.

The Sigma 50-500 OS is an f/4.5 to f/6.3 lens but in reality the area of f/4.5 is fairly limited. Through most of the range the Sigma’s maximum aperture will be a half-stop slower than the Nikon’s.

One thing I will mention is that all three of these lenses don’t really get sharper in the center when stopped down. The corners sharpen up a bit, but that’s about it. 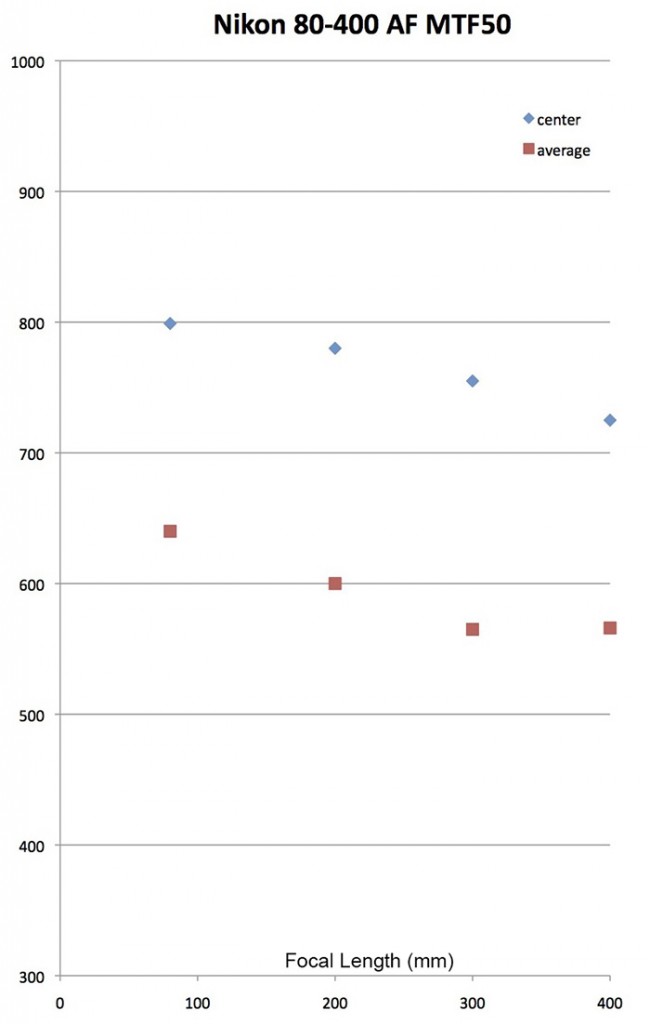 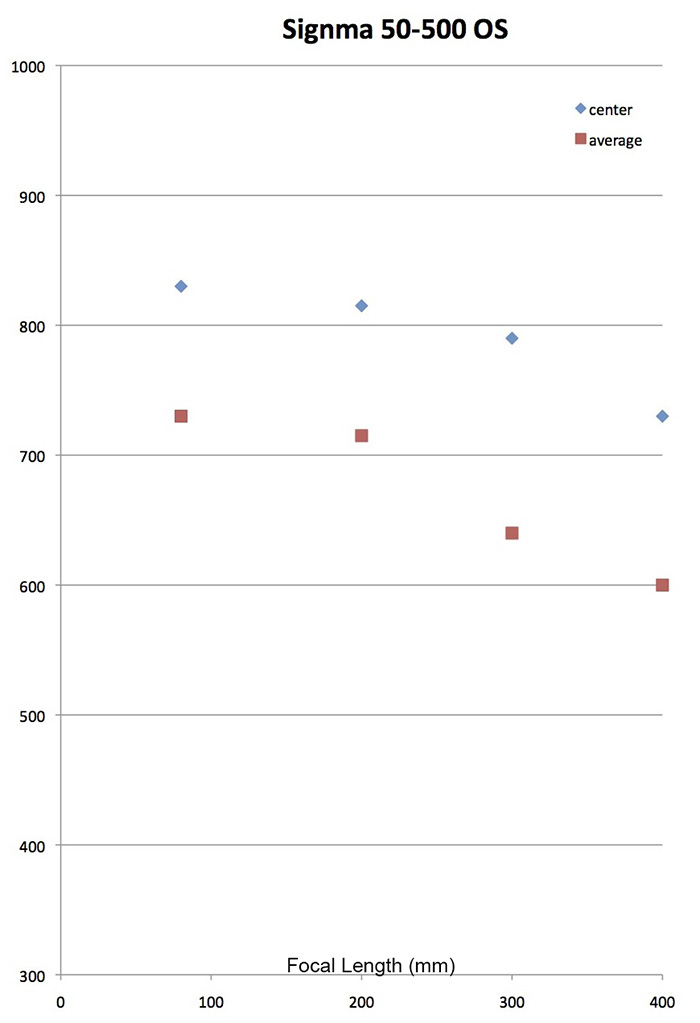 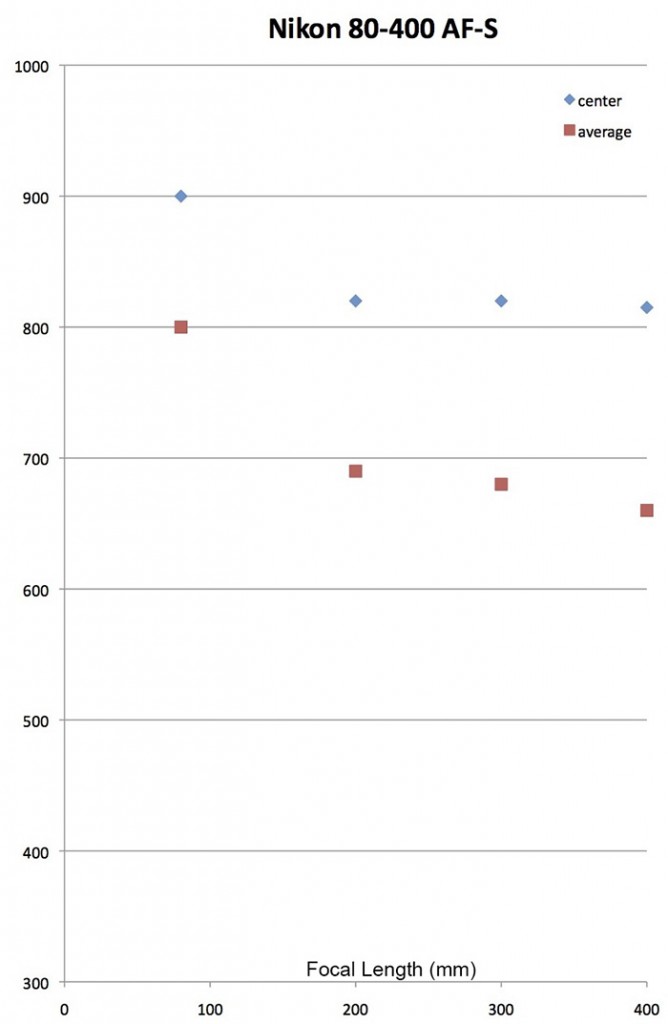 I’m not one to run screaming into the hills because a lens is expensive. Sometime they are expensive because they’re worth it. In this case, when the Sigma 50-500 costs $1500 and the original Nikon 80-400 AF (not my favorite lens at all, but adequate) costs $1400 I’m struggling with the price.

Basically I could get one of those two and another nice lens for what the Nikon 80-400 AF-S is costing at the moment. When the price drops to $2,000 or so I’d consider it worth the difference, but not at $2,700. At this price you’d have to consider a Sigma 120-300mm f/2.8. A significantly larger lens, of course, so not an option in many cases, but f/2.8 for about the same money is an option to think about.

On the other hand, in 6 months the price will probably be significantly lower. Nikon has been fairly quick with price drops lately. If I already had the older version I’d certainly hold on to it for a bit. The new one is better, no question. I’m just not sure it’s worth double the price.

But if you just have to have the best f/5.6 telephoto zoom right now and damn the price, well, the Nikon 80-400 AF-S would be the one you need.