Every so often I get an email asking me to jump in on some forum argument or other. I rarely do that because of the language barrier.

Two of the common languages spoken on forums are CAKWAF (Complete, Absolute Knowledge Without Any Facts) and AFIDAWAB (Any Facts I Don’t Agree With Are Bullstuff). Since I am not fluent in those languages, I tend not to get involved in the more, uhm, enthusiastic online discussions. But sometimes I can’t help myself, repeating the behavior of adding facts to a ‘vigorous’ discussion and always expecting a different result.

This happened recently when a discussion occurred about what the original poster called ‘silent upgrades’ to lenses. As someone who takes apart lenses and cameras for my day job, I did confirm to that person that over the lifespan of a lens, some internal changes may occur and the camera companies don’t make announcements about them. (I don’t like the term ‘silent upgrade’ because such changes aren’t always an upgrade, it may be something as simple as a new vendor supplying a slightly different part. There also seem to be times when the change is actually a downgrade.)

Most of the responses to my statement were written in CAKWAF and AFIDAWAB. Responses claimed with absolute certainty there were laws that prevented any changes once a lens was released unless they were announced (there aren’t). Other people, based on owning two different copies of a certain lens, stated with absolute certainty there were never any changes in the 10-year production cycle of that lens (there were, I’ve seen them). Rather than responding with words, I thought it would be simpler to just take apart a couple of lenses.

The Canon 85 f/1.8 is a very good, reasonably priced lens that’s been popular for two decades. Its external appearance and optical formula have been unchanged for that entire time. It also has a tendency to get dust under the front group, so (because we’re a rental house and people expect to rent clean lenses – not because the dust mattered to photographs) we take them apart to clean them quite often. So here are two copies of the Canon 85mm f/1.8 with the front group removed for cleaning. One of these things is not quite like the other. 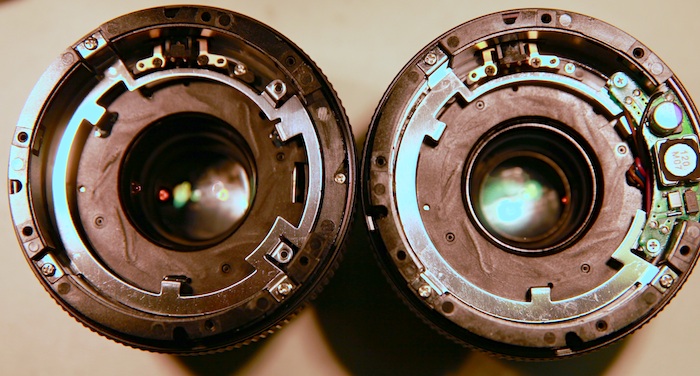 While identical on the outside, identical optically, and identical in function, the newer one seems to be missing a circuit board. Notice the slot that the connecting wires go through on their way to the main PCB (circuit board) on the back of the lens is still there. There just aren’t any wires going through it.

If we take the mount of the two lenses off, we can see other differences in the PCBs. 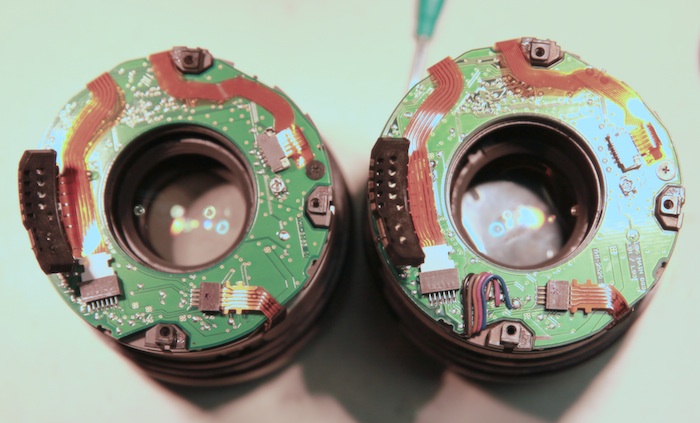 Obviously the newer version doesn’t have the 5 soldered wires coming up from the accessory board (6 o’clock on the older version) because the circuit board isn’t there. The new PCB board doesn’t even have the solder points to attach those wires and there are some other minor differences in the circuit traces on the PCBs. I didn’t take the PCBs out to show you the bottom side, but if I had you would notice that all the functions of the DC/DC conversion board (the board missing from the newer copy) have been added to the main PCB in the newer copies.

Does it make any difference whatever in how the new copies work compared to the old copies? Nope. I suspect it’s simply that advances in electronics since the lens was first released make it simpler and more cost effective to eliminate the secondary DC/DC conversion board and incorporate those functions into the main PCB. It hasn’t been done to address any reliability issues (the 85 f/1.8 is a rock, it  hardly ever breaks), it doesn’t change function at all, it’s probably just more cost effective.

Sometimes changes like this that occur during the life of a lens (or camera) are done to address a problem. I can think of a half-dozen examples off of the top of my head; a few announced by the manufacturer but most not announced.

These aren’t always ‘secret upgrades’ as the paranoid among us like to think, but sometimes they are. Most often, though, they’re simply a change in subassembly supplier or a more effective way to manufacture a part, like this one.

Tweet
Posted in Teardowns and Disassembly
And Edgerton Said, “Let There Be Light.”
Good Vibrations: Designing a Better Stabilization Test (Part I)