Way back in the old days, before everything was plug and play, you could buy a computer and accessories from one manufacturer and be certain it would all work together. The cool kids, though, would mix-and-match different pieces and end up with a better system that could do more things than any one manufacturer’s system would, and for less money. They realized they might have to spend some time getting this to work with that, and once in a while things wouldn’t work at all. That’s the price you pay for being a cool kid and getting more for less money.

The people who had problems bought the same thing the cool kids did, but just got irritated when things didn’t all work together right out of the box. The cool kids laughed, felt even cooler, and made some money debugging the other kids’ systems for them.

A few weeks ago Metabones sent me one of their new EF lens to Black Magic Pocket Camera Speedboosters to play with. I did the usual optical testing and let some of the video guys shoot with it, like all the other bloggers do. I planned on writing a piece saying how awesome the optics were (they are) and how many cool things it lets you do with a Pocket Camera (it does) like all the other bloggers do. But in our testing we found a few things that didn’t work well together, and it occurred to me that rather than adding yet another “The EF to Pocket Camera Speedbooster is Really Great” blog post, I could do something useful and actually list what it works well with and what it doesn’t.

What the Speedbooster Does

First, let’s be clear about what it doesn’t. It doesn’t work with anything other than the Black Magic Pocket Camera. It does NOT work with other Micro 4/3 cameras. If you put it on them, not only will it not work, it will probably damage the camera, damage the adapter, and tell the world you are That Clueless Guy. It won’t mount EF-S (Canon crop frame) lenses.

What the Speedbooster does do is take an EF (Canon full-frame) mount lens and multiply the angle of view of the lens 0.58x. Since the Pocket Camera has a 3.0 crop factor (depending on how you measure things), it basically reduces the crop factor to 1.75x. It also increases the maximum aperture by 1.66 stops, so an f/1.2 lens would become an f/0.74 lens. It lets you control the aperture electronically from the camera, and if the lens has Image Stabilization, the IS still works. It even (usually) gives you distance and zoom display.

It does all this while actually reducing aberrations and improving image quality compared to that when the lens is shot on a full-frame camera. I checked. It’s true.

But given all of the near-magical stuff it does do, we shouldn’t be shocked that it doesn’t do it on every single lens made for Canon cameras. Since no one seems to have much of a database on what lenses do and don’t work, I thought it best we start one.

Lenses We Have Tested that Work

I will say a database like this isn’t going to be 100% accurate. For example, one of our video techs found a lens that absolutely didn’t work with the BMPC and Metabones EF Speedbooster he took home for the weekend. But we’ve tried several more cameras and adapters on multiple copies of that lens and it did work. You have to remember there’s more than just the most recent firmware update involved here. Manufacturers make minor tweaks to lenses, adapters and cameras all the time. Even though a given lens usually works, there may be rare times when a certain combination of lens/camera/adapter combinations doesn’t.

Also some of the “working” zooms require registration on the adapter. To do this, you turn everything on, zoom from one extreme to the other, and then turn off the camera for 5 seconds. When you turn it back on, everything works well. Some of the variable aperture zooms listed may not retain registration when zoomed from near to far. In that case, you need to turn the camera off, then things will work again.

Lenses We Have Tested that Do NOT Work

Although we say they don’t work, you can mount them and take images in most cases. But you can’t adjust the aperture and things don’t work well.

It’s a Bit Moot for Us

Hopefully this is useful to those of you who will use this on your Pocket Camera. I suspect a new version of the Pocket Camera will be here shortly, though, and how the adapter works or which lenses work or don’t work may change with a new version of the camera. Unfortunately, I won’t be updating the list further as we’ll be discontinuing the Pocket Camera. It’s a great product, but it can’t be repaired when the HDMI port breaks loose, which happens fairly frequently. Nonrepairable items just aren’t rental material.

Addendum: Because someone has already asked, the reason the BMPCC can’t be repaired when the HDMI port breaks is because the port is soldered to the main PCB and a good tug on an HDMI cable will pull it off. The PCB is permanently attached via a bonded cable to the sensor board, so to replace the HDMI port you basically replace everything in the camera except the casing. Not the best design, obviously. But I’m told Blackmagic is working on an exchange program. 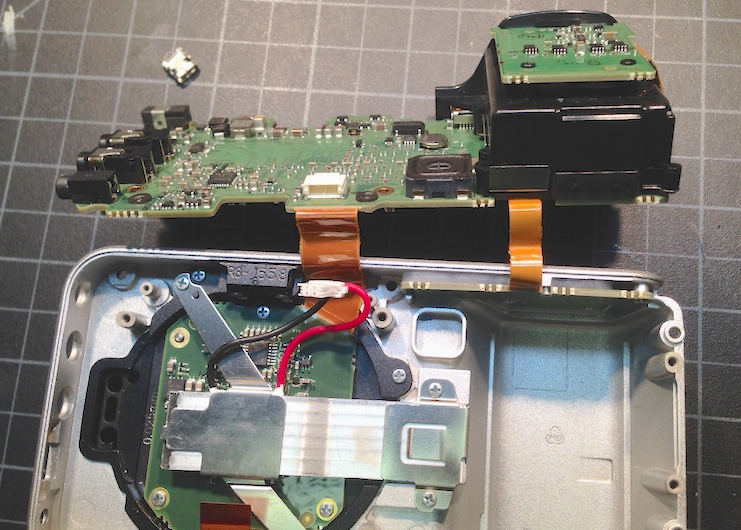 Tweet
Posted in Other
Of Course We Took One Apart
HandeVision IBELUX 40mm f/0.85