We’ll continue our Just the Lenses posts with the 85mm wide-aperture prime lenses. We’ll get through all of the wide aperture primes eventually, for those of you who like this series. If you haven’t read the previous posts, then you might want to go back and skim the introduction of the previous one to see the reasons we’re doing this.

The 85mm lenses are quite different from the 35mm lenses we tested in the last post. For one thing, with the exception of the Nikon 85mm f/1.4G, which was released in 2010, the designs aren’t quite as new as the 35mm lenses we tested. The Canon and Sigma have fairly recent release dates, but they are based on older optical formulas. The recent updates were basically electronic.

Additionally, many of us are excited about new 85mm f/1.4 lenses that are being released (no, I don’t have any 85mm Otus copies yet). Comparing these existing lenses will give us a nice baseline to compare with the new Zeiss and Sigma releases.

My impression, too, is that many people aren’t quite as happy with the wide-aperture 85mm lenses as they are with some other focal lengths. The Canon can be breathtaking, but is breathtakingly expensive. Many Nikon and Canon shooters seem to prefer their brand’s 85mm f/1.8 lenses, at least as a better value. Even Zeiss fanboys acknowledge the 85 f/1.4 isn’t the sharpest crayon in the Zeiss box, and the Sigma 85mm f/1.4 has never been very popular.

If you don’t speak MTF, don’t worry. It’s not hard. Higher on the vertical axis is better. Dotted and solid lines of the same color close together are better (far apart is astigmatism). The horizontal axis goes from the center of the lens at “0” to the edges of the lens at “-20” and “+20”. Lower lp/mm have association with strong contrast, while higher lp/mm are associated with ability to resolve fine detail. 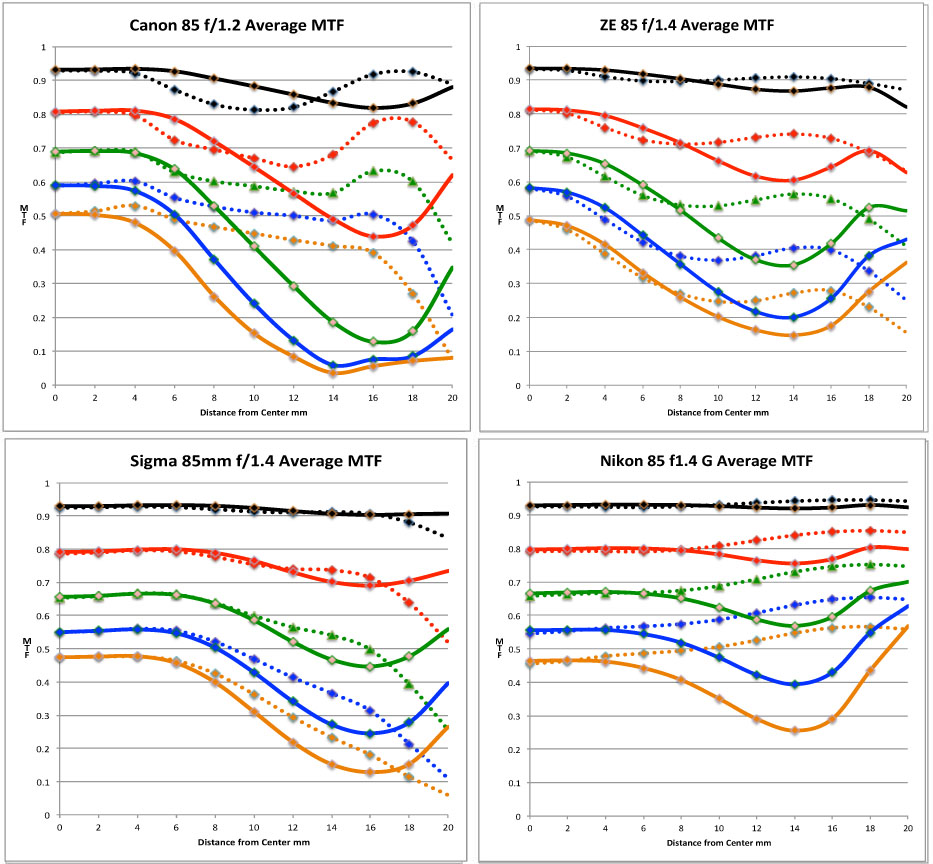 I have to admit I was a bit surprised by the MTF result. (Remember, of course, that the Canon is working at f/1.2 so it’s at something of a disadvantage against the other lenses.) Even at f/1.2 the Canon is the sharpest lens of the group in the center of the image. Notice the higher frequencies (30, 40 and 50 lp/mm) have MTFs around 0.7, 0.6, and 0.5 out to about 4mm from center (which is the center 1/3, roughly, of the image). The Zeiss is nearly as sharp right in the center, but falls off more rapidly. The Sigma and Nikon aren’t nearly as sharp in the center.

The Nikon, however, is clearly the off-center champion. In the outer half of the image the Nikon is still doing great, while the Canon is all over the place. The Sigma and Zeiss aren’t quite as sharp off center as the Nikon, but have less astigmatism.

So, as we’ve known all along, the Canon is a superb portraiture lens; exceptionally sharp in the center and not very sharp in the outer half. The Nikon isn’t quite as strong in the resolution department but is very even across the entire image. The Sigma is somewhat similar to the Nikon, although not quite as good. The Zeiss is a bit like the Canon, but not as sharp in the center and a bit sharper off axis (and of course, this is at f/1.4 compared to the Canon’s f/1.2).

If you haven’t seen these graphs before, they’re a bit different than the MTF curves (you can read more about them here.) 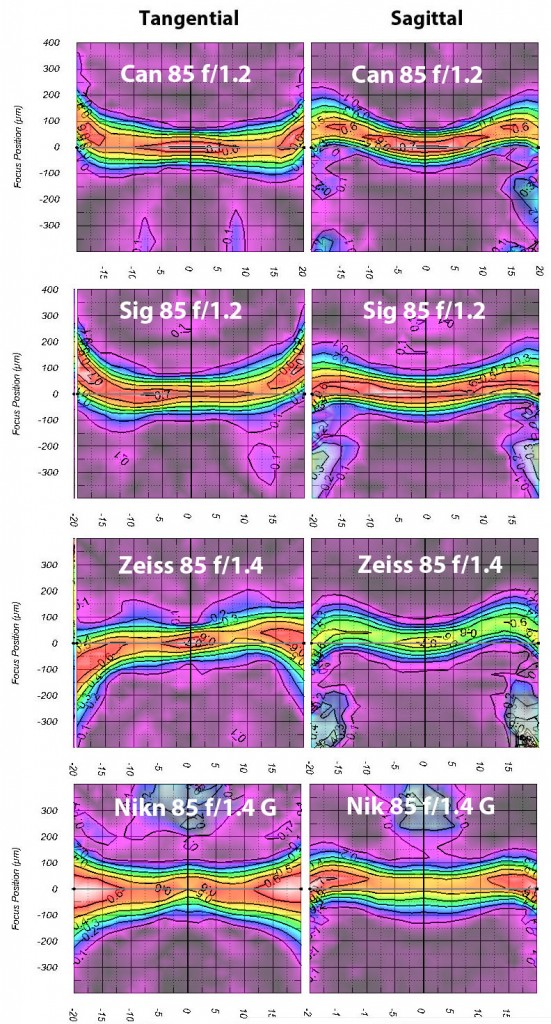 The field curvature of 85mm wide-aperture primes is not as severe as the 35mm primes were. These lenses also give a good demonstration of how field curvature and MTF curves relate. As it’s MTF curve suggests, the Nikon has a nearly perfectly flat field, remaining in sharp focus from edge to edge. The Canon has a bit of moustache curvature in the sagittal field and a C-curve in the tangential field, explaining some of its astigmatism. The Sigma’s field is similar, although with less sagittal and more tangential curvature. The Zeiss sagittal field is much like Canon’s but the tangential field is in the opposite direction.

We compare the MTF for each of 4 rotations that we measure for each copy of the lens to determine the difference between the sharpest and softest side or corner.  (Every lens, when measured to this degree of accuracy, is slightly different in the worst and best corners, although you’d have trouble telling it in a photograph.) 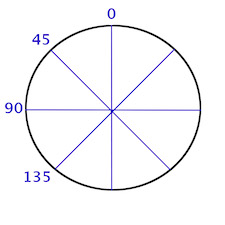 If you haven’t seen these before, please read the explanation in the previous post. The bottom line is lenses with lower variance (remember, the variance is the average variance of many copies) tend to have more similar corners, while lenses with high variance have more differences. 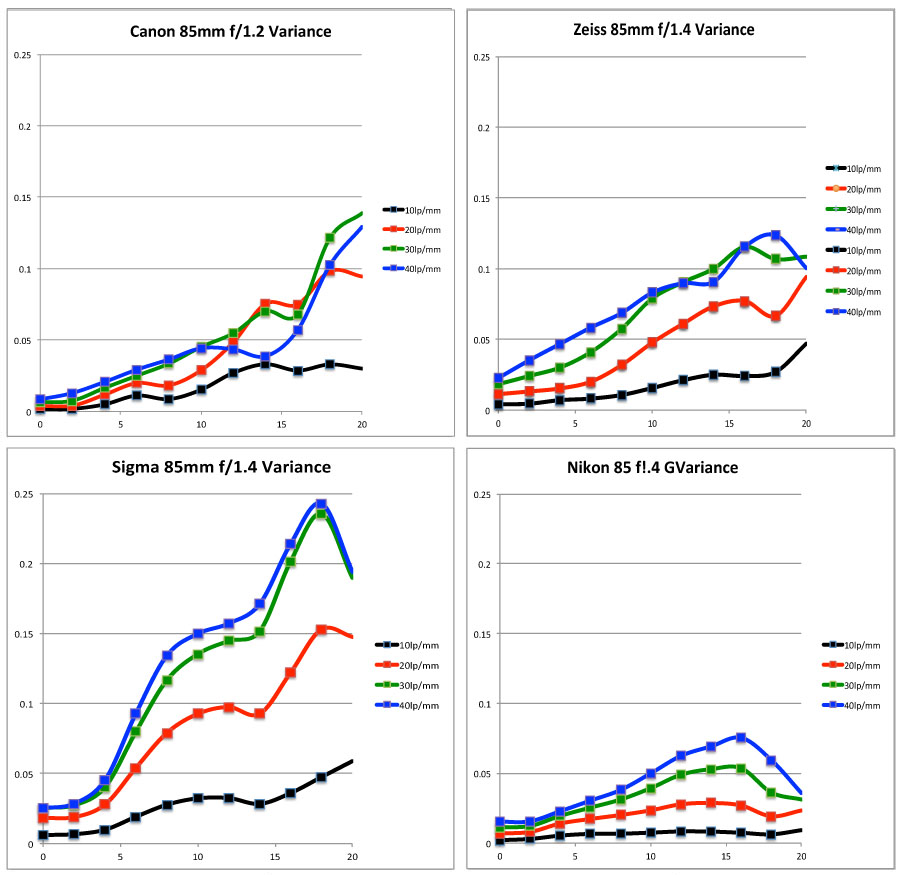 Compared to wide-aperture prime lenses we’ve tested in general, the Nikon, Canon, and Zeiss lenses would all rate as excellent. The Sigma clearly isn’t as good, as you can see. It’s not awful, but it’s below average. That’s not surprising, though, since this design came out before Sigma started their Art lens line and new quality assurance programs. Hopefully the new Sigma 85 Art lens will be superior in this regard.

The optical bench results for the 85mm f/1.4 (and Canon f/1.2) lenses are a bit different than what we saw for the 35mm lenses. There we had several recently released and very sharp lenses. Here we have some older designs. The Canon 85 f/1.2 is a bit of a specialty lens, and is spectacular at what it does, although at a very rich price.

The other three lenses were OK, but none of them were spectacular. The Nikon certainly brings a uniquely flat field, which is a real plus for certain types of photography, but its resolution is not all we might wish. The current Sigma and Zeiss offerings were adequate, but certainly not awesome.  But the good news (hopefully) is we should be seeing some more attractive offerings in this focal length soon.

One note, because several people have asked: yes, I ran the Canon at f/1.4 also. It was so nearly identical to the f/1.2 graph that I didn’t bother adding it to the post.