This past week, I had the unique opportunity to go to the National Association of Broadcasters’ trade show, more commonly known as NAB. To say NAB is massive, is a gross understatement; with over 100 thousand people in attendance, and over 1 million square feet in booths and other showrooms, NAB is one of the largest expos and trade shows in Las Vegas. LensRentals was there to see all the new products as they were announced, as well as supply gear for Post Production World – an educational function held within the NAB trade show. 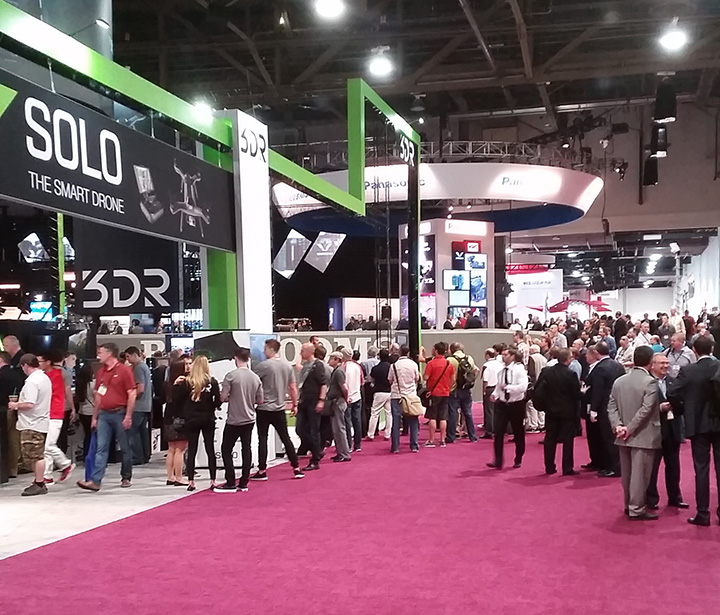 Given the size of NAB, it’s nearly impossible to see everything this show has to offer. Hundreds of booths are placed within the Las Vegas Convention Center, making it incredibly easy to get overwhelmed, exhausted, and even lost at times. Even after a full 3 days of walking the showroom floor, I am convinced I missed a thing or two, and wasn’t able to see everything that NAB has to offer. That said, here are some of the biggest and best products I noticed while walking NAB show room.

Perhaps because of the recent loosening of FAA regulations, drones were likely the biggest products shown off at NAB this year. With the newly introduced Aerial Robotics and Drone Pavilions featured within NAB, visitors had the unique opportunity to get an up close look at the latest drone announcements during this years trade show. Alongside the drone pavilion, was smaller caged in areas at multiple booths, showing off their flying pieces of technology. Most notably of the drone manufactures this year were DJI, Freefly and Solo.

The largest in drone size of the three comes in the announcement of the Freefly ALTA. With the ability to mount a camera on either the top of bottom of the drone, the Freefly ALTA utilizes six blades to insure stability and flight for cameras up to 15lbs, allowing you to easily fly your Alexa Mini’s, RED Dragons, and Sony F55s. Included on the ALTA is the ability to mount a MoVI system, allowing for full stabilized control of your camera while airborne. The only downside to the ALTA? It’s priced at $8,495, which is a hefty price for any hobbyist looking to upgrade their current drone solution.

Alongside the announcement of the Freefly ALTA is the announcement of drones from both Solo and DJI. Solo, the newest drone manufacturer to the scene, announced their Smart Drone, which is the first drone made exclusively for GoPro camera systems. With an easy to use flying system, and price tag of only $999, the Solo Smart Drone is a great drone for those who are interested in flying, without looking to spend thousands on a drone solution.

Finally, DJI also announced their Phantom 3, an upgraded system from their previous Phantom 2 series. Featuring their own camera system, the Phantom 3 supports 4K video on a 3-axis gimbal, giving you full control of your camera system when flying. Priced starting at $999 for the Advanced model (and $1,259 for the Professional model with 4K video), the DJI Phantom is the most known and recognized drone solution on the market.

Drones weren’t the only thing highlighted at the NAB trade show in Las Vegas last week. Various lighting products were also highlighted during the show, showing the latest in LED technologies. A few years ago, was the year of the LED lighting solutions, with many unknown manufacturers coming out to show off what they had to offer. Many of these lights however, were very harsh, and more often than not, had a green cast on them, making white balancing a massive pain. However, many of those problems have been fixed, making the latest announcements in LED lighting the best of their kind.

Of the two announcements and presentations, I found that the most impressive were both the Kino Flo Celeb lighting systems, and ARRI’s new Sky Panel LEDs. The Kino Flo Celeb system, announced late last year, provides a soft and elegant lighting system in LED format to be used in video production. Kino Flo has been an industry standard for years with their fluorescent systems, and their LED solutions maintain the high level of detail and consistency throughout. The ARRI SkyPanel system, works much in the same way, offering beautiful high powered and soft light in a compact system.

The biggest announcements at NAB this year likely came in the form of camera solutions for videographers. With the RED Weapon system, Canon C300 Mark II, and the Blackmagic URSA MINI announcements, videographers will soon have new solutions to capture the best video quality available.

The RED Weapon brain was announced during NAB this year, boasting impressive specs to say the least. For $49,500, you’re able to get the 6K Carbon Fiber version of the camera system. For an optional $20K upgrade fee, you’re able to get the 8K full frame version, allowing for 8K resolution in spectacular full frame resolution. However, at the hefty $70k price tag, this camera won’t likely grace the hands of indie filmmakers any time soon.

Alongside the RED Weapon announcement comes the newest from Blackmagic, in the form of the URSA MINI. For only $2,995, the URSA MINI is a smaller and lighter version of the URSA camera system, boasting 4.6K resultion on a Super 35mm sensor allowing for up to 15 stops of dynamic range. The URSA MINI was only announced however, with it expected to show up on store shelves sometime in July.

Canon also announced their Canon C300 Mark II cinema camera. This 4K video system supports 15 stops of dynamic range, RAW ability, 120fps slow motion, and manages to fix all the quirks we’ve had about the original C300 system. The Canon C300 system will retail for $15,999, and should be available sometime soon.

These are just a few of the announcements made at NAB this year. If you were there yourself, tell us what your favorite products were from the trade show using the comments below. And keep a look out on our website to have the opportunity to rent these systems as they become available.