Five Features On The Profoto B1 Not Seen On Other Strobes

I’ve said it hundreds of times now, I really love the Profoto B1. Years ago, I would use my Alien Bees strobes at a fraction of the price, and scoff at those who chose to go with the more expensive strobe solutions. I’d often laugh, and say light is light, and that if you need a 2 thousand dollar strobe to produce your work, there was something wrong. I’ve found however, the something wrong, was my mindset.

Now I’m not saying that you do need this expensive piece of gear to produce work. It’s easy to get wrapped into the mentality that your gear is somehow to be blamed for you not producing magazine quality work. However, the Profoto B1 is what I believe to be the best strobe on the market right now, and the reason isn’t the price, but all the features that it has that many other strobes do not. So let’s go over a quick overview of what sets the Profoto B1 apart from the rest.

The most obvious feature of the Profoto B1 is the battery attached to its side. No other (major) brand of strobes has been able to actually attach the power unit to the side of the flash, allowing for 100% cordless operation with around 220 full powered shots on a single battery. 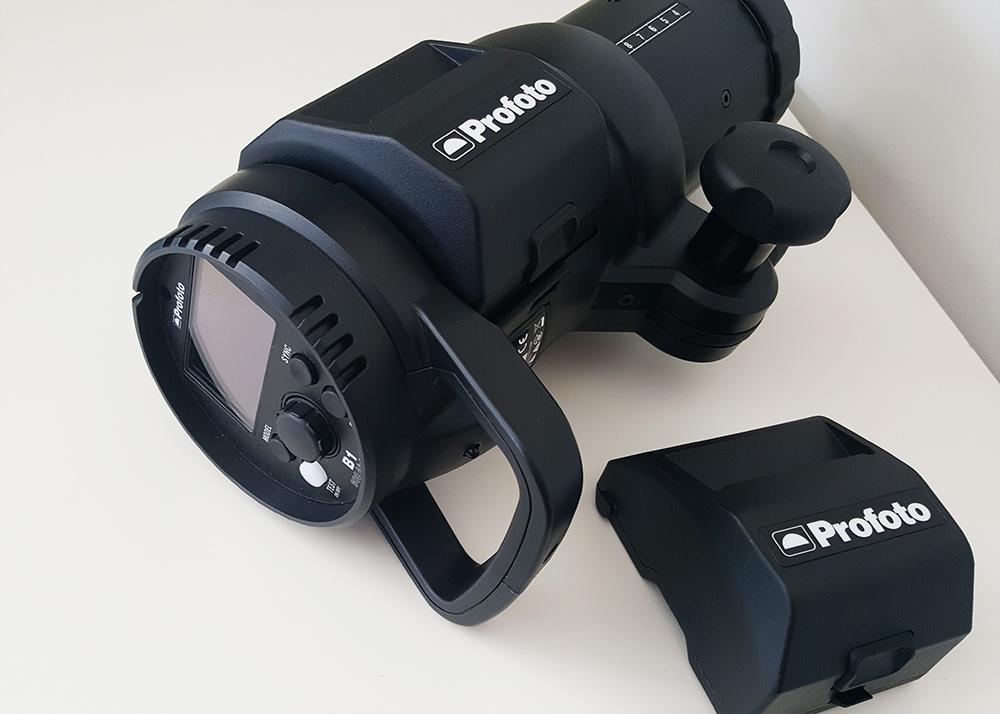 But yes, there are alternatives. An Alien Bee and Vagabond Mini can be purchased and give you on location power for your strobes – as does the Elinchrom ELB 400. But each of those systems require cables to be ran from the battery pack to the unit. While small, these cables add an inconvenience while on location, and may make the whole lighting process a bit more cumbersome. No major manufacturer has been able to place a battery on the unit itself, with the exception of Profoto.

Alongside the many features in the Profoto B1 is the TTL capabilities. Now I know what you’re thinking… “Who uses TTL?” and you’re right. Ultimately, we should learn how to balance light using the manual functions, just as we learned how to adjust ISO, Aperture and Shutter Speeds using the manual functions. But the TTL actually works well and has some practicality to it. For example, if I’m honest, more often than not, I’m shooting in Av mode for most events or high action types of photography. Sadly, adjusting settings takes time, which could make me miss the needed photograph from the day. The same applies for TTL on the Profoto B1. If I want to rimlight something, it’s easy to just set the light on a stand, power on, and shoot. Perhaps best of all, TTL and Manual mode is decided by the TTL-C/TTL-N remotes on your camera, so you’re able to switch back and forth, without ever having to touch the strobe.

Perhaps the most incredible feature within the Profoto B1 came in a firmware update for the unit and trigger, and that was High Speed Sync. For those who remember the Profoto B1 announcement back in November of 2013, little to no mention was made about the possibility of High Speed Sync in future updates. But just a few months later, they introduced High Speed Sync (HSS) to the units, allowing you to shoot up to 1/8000th of a second with the use of strobes.

This is an incredible feature for a lot of photographers. As you may know, the flash sync speed for traditional strobes is limited to 1/200th of a second (1/250th on crop bodies). This is because, the shutter is not able to open and close fully at faster speeds, resulting in a portion of the shutter actually being in frame (in the form of a black bar on the edge of the frame). High Speed Sync fires multiple microsecond bursts of light, allowing the light to cover the entire frame, in an incredible scientific manner. The result is, you lose a little bit of flash power, but allow for faster shutter speeds. Doing this, allows you to both balance ambient light, and shoot at a shallower depth of field. 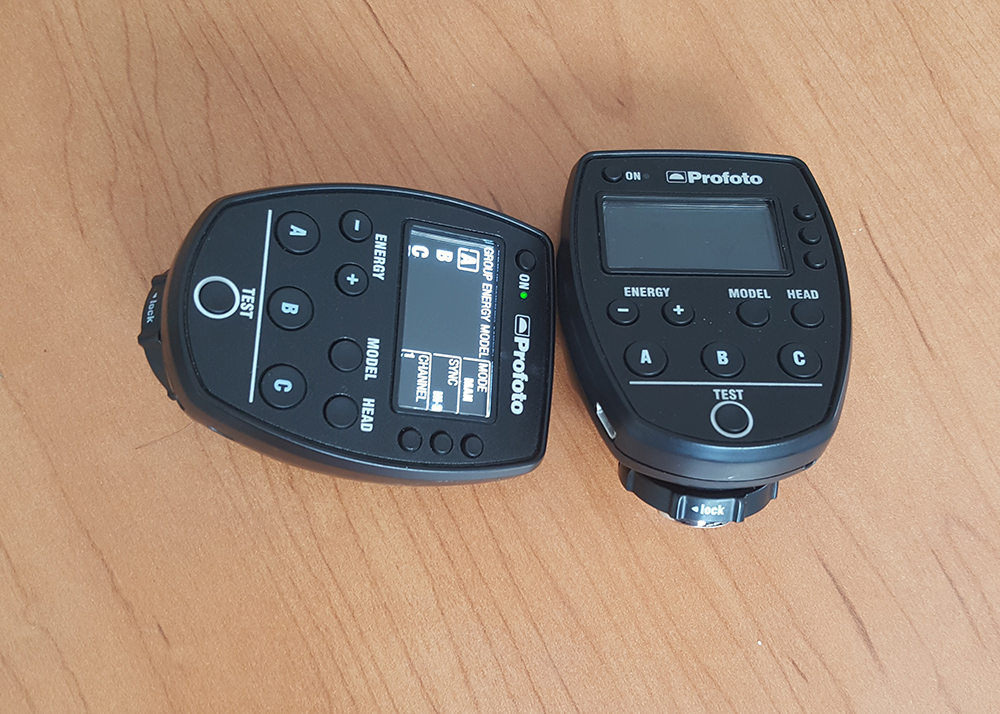 One of the favorite features with the Profoto B1 isn’t the unit itself, but the remote that pairs with it. The Profoto TTL-C (For Canon) and the Profoto TTL-N (For Nikon) allows you to do a lot of things traditionally unavailable in a hot shoe trigger. For one, they allow you to group your lights into 3 groups (A, B, and C) and on 8 different channels (1-8). From there, you can adjust each light power output in one stop increments, or 1/10th stop increments. You’re also able to turn on TTL, High Speed Sync, Rear Curtain Shutter, Modeling Lights, and more. All of these features are adjustable, in a small trigger unit (smaller than a Pocketwizard in size). While this feature isn’t new to strobes (most notably the PCB Cyber Commander), it is the easiest to use system I’ve ever had the pleasure of trying (and I’ve tried virtually all of them).

The most practical feature really needs to come last, and that is the overall build quality of the Profoto B1 – and all of the Profoto Strobe line. To put it simply, the Profoto B1s are robust. While you can feel the quality of these units by simply holding them, my discovery came in the form of a disaster during one of my photography workshops last summer. I had rented Profoto B1s from LensRentals, for students to use in an outdoor lighting workshop. During that workshop, we had a gust of wind, and one of the Profoto B1 strobes came crashing down from a 12ft stand, directly onto concrete. The result was a cracked housing unit, but an otherwise perfectly good unit. In fact, despite the damage, the flash unit went on to be heavily used for another 2-3 hours. The unit still fired, the unit still held softboxes, and the unit still performed at 100%, despite the damage done.

And this is important for a lot of reasons. Had that happened, and the strobe broke entirely, I’d be out 50% of my lights during a very important day. Perhaps you’ve used Alien Bee strobes in the past. They’re often regarded as having the best customer service in the industry, but that’s only because you’ve likely had to send the unit in for repair on at least one occasion. The mounting arms will break, the unit will start smoking, and the circuit boards will eventually cut out. While they’re always happy to repair the units, often for either free or for incredibly cheap, you still need to send them in, and the shoot that they broke down on, may already be ruined. Having gear you can rely on is a huge asset, and an absolute requirement when working on commercial photo shoots – which is why Profoto is the industry standard.

Sadly, the luxury of the Profoto B1 doesn’t come cheap. At $2000 for a unit, it’s out of the price range for many, especially when decent strobes can be found for less. But if you haven’t had the opportunity to use the Profoto B1s before, I recommend you give them a try, and see for yourself what really separates them from the rest of the competition.