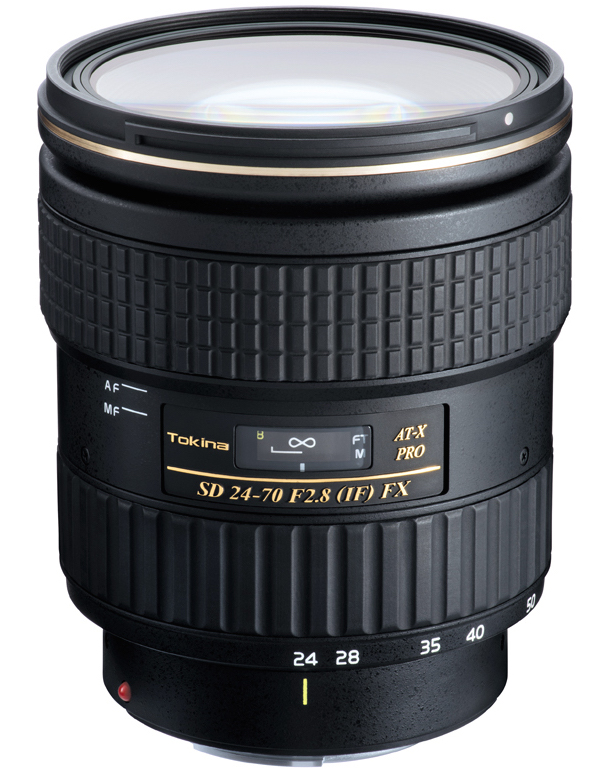 The Tokina has 15 elements in 11 groups with 3 molded aspheric and 3 ultra-low dispersion glass elements. 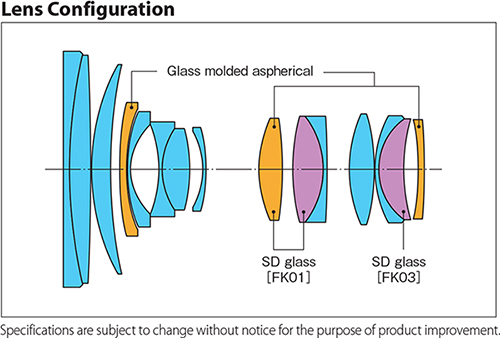 We got our hands on one copy of the Tokina today. As you know, I prefer to test at least 10 copies to get and idea about the range of sample variation with a new lens, but it may be weeks before we get more of these, so I ran the one we had through our MTF bench just to get an idea of what it would be like. I’ll directly compare it to the Tamron 24-70 f/2.8 VC USD lens in this post.

Most zoom lenses have better resolution at certain focal lengths. All of the 24-70 f/2.8 zooms we’ve tested have been weakest at 70mm and strongest at 24mm, which makes sense for a couple of reasons. The Tokina is certainly no exception, being awesomely sharp at 24mm but fading a bit at 50mm through 70mm.  (I apologize to those who can’t see the entire 800-pixel image without scrolling. We try to stay at 600 pixels, but this just isn’t readable at that size.)

The logical comparison for the Tokina 24-70mm f/2.8 PRO Fx is with the Tamron 24-70 f/2.8 VC USM since they are the two primary third-party lenses in this focal length range. (Yes, Sigma has a 24-70mm zoom, but it’s a much older, soon to be replaced design and just not as good as the newer lenses.) If you’d like to see how it compares with the manufacturer’s 24-70 f/2.8 lenses you can see their measurements in our previous 24-70mm post.

Both lenses are at their best at 24mm. The Tokina, though, is clearly better in the center. In the outer 1/3 of the image there’s not a lot of difference, however. 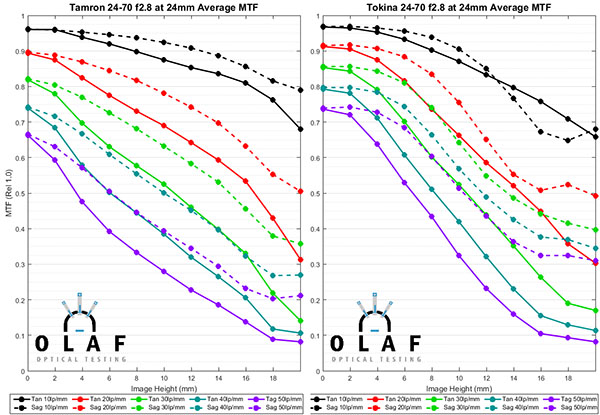 At 50mm things are remarkably even. I wouldn’t even begin to try to hair-split any differences. 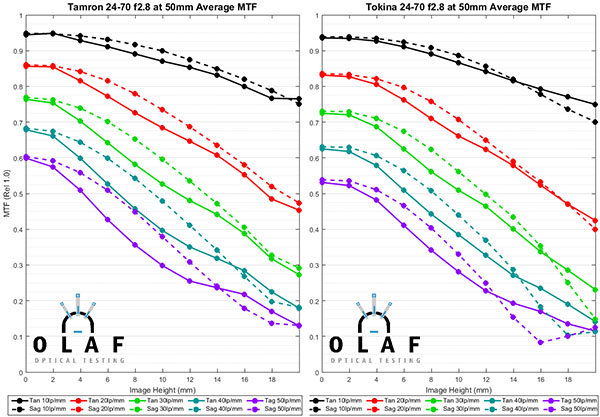 At 70mm, as we saw in the 24-70mm comparison we did last week, the Tamron really falls off. The Tokina remains every bit as good as it was at 50mm, and is clearly better than the Tamron. 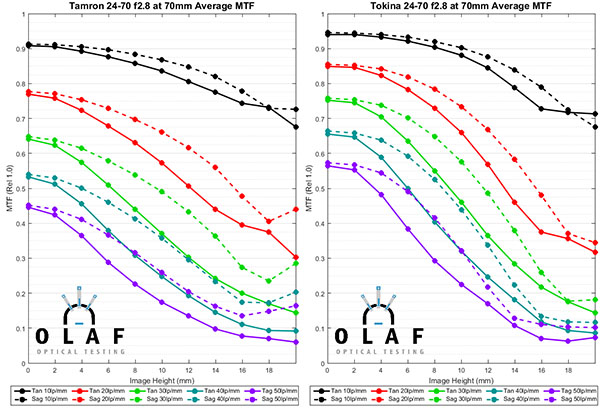 So What Does This Mean?

Well that really depends how much stock you put in MTF of your lenses. From that standpoint, it looks like the Tokina has better resolution than the Tamron at 70mm and in the center at 24mm. Otherwise, they’re very even. Based on MTF, and with a lower price point, I’d have to declare the Tokina the better lens.

There’s a lot more to it than that, though. The Tamron has vibration control and depending upon your shooting habits that may be a huge difference. Higher MTF doesn’t matter a bit in a motion-blurred photograph. Plus the Tamron has been available for some time and is known as a reliable lens with low copy-to-copy variation. There would also be a slightly different choice depending upon which brand you shoot with. The Canon 24-70mm f/2.8 Mk II is a really good lens; a bit better than the Tokina. If I shot Canon and money was no object, the Canon lens would be the way to go. The Nikon 24-70mm f/2.8 AF-S isn’t the best Nikkor zoom, so if I was a Nikon shooter, I’d be strongly leaning to one of the third-party zooms. Or waiting for the new Nikon 24-70mm lens to arrive.

And let’s remember, this is one copy of the Tokina compared to the average of multiple Tamron lenses. I’ll feel a lot more comfortable when I’ve tested 10 copies of the Tokina and seen how much sample variation there is. But for now, the Tokina is looking like a really good lens and an awesomely good price.