Brandon has accomplished much during his summer with us, including several things I never thought we’d be able to do. One of those things was measuring the MTF of supertelephoto lenses on our optical bench. A vertical bench just isn’t designed to handle the mass of those big lenses and technically isn’t supposed to be able to test anything over 200mm focal length. Brandon found some workarounds that allowed us to get accurate MTF readings on a number of supertelephoto lenses. 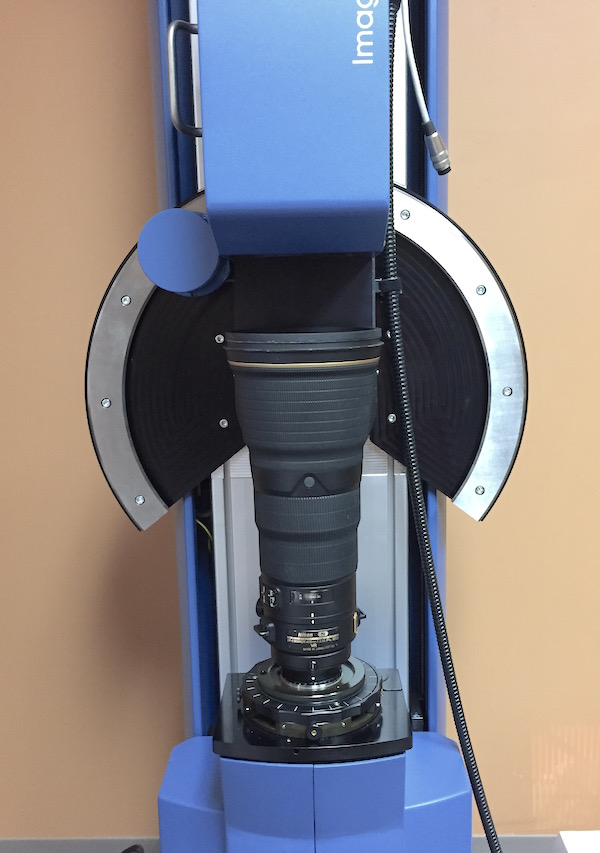 Some of the workarounds are simple. For example, there’s a lot more vibration with a big, long lens. So after the machine moves to each measurement point we had to program in a long delay before doing the measurements. There is also a bench limitation that lightly affects the results. Our largest collimator provides up to a 100mm diameter beam of light for tests, so the 300mm f/2.8 lenses are at about f/3 and the 400mm lenses are at about f/4. There’s nothing we can do about that, Trioptics doesn’t even make a bigger collimator and if they did it would cost $100,000 by itself.

We weren’t able to do our full set of 10 copies of each lens there just weren’t enough in stock. There are at least 5 copies (Nikon 400 f/2.8), though, and most have 7 to 9 copies tested. But because there are less than 10 we won’t be putting out consistency numbers today.

Before we present these results to you, let me get one thing out of the way: we aren’t going to be testing many more of these. Brandon’s going back to school soon. Measuring these is too time-consuming, meticulous, and repetitious for me to want to do it. To put it in perspective, I could test 5 or 6 standard prime lenses in the time it takes to do one super telephoto run. So what I share today is likely to be all that’s going to be shared when it comes to measuring MTF curves on super telephoto lenses.

One other thing I should mention, you’ll notice some of these real MTF curves are fairly different from the manufacturer’s released MTF curves. (This is true for other lenses, too, but readily apparent for these lenses because the manufacturer’s MTF curves are so nearly perfect.) That’s the difference between a computer generated ideal MTF curve of the design, and an actual measurement of the manufactured product. The reality of the manufactured lens accounts for some of the difference, but also the reality of actual measurement (versus computer simulation) accounts for some of it too. In this case particularly, I want to emphasize that we’re using our MTF bench outside of its intended purpose, so I can’t be certain, especially at 400mm, that we aren’t introducing some other factors that might be affecting the measured MTF curves.

There is a lot of ways to get to 200mm. Most commonly, it’s a 70-200mm zoom shot at 200mm (we’ll release those MTF curves when we start releasing zoom lenses). Canon also has a relatively inexpensive 200mm f/2.8 prime lens. Both Canon and Nikon have very expensive 200mm f/2.0 primes. As always, when you look at these graphs, remember different apertures are comparing apples and oranges. A lens tested at f/2 would have higher MTF if tested at f/2.8, etc.

Just to give you a bit of orientation, I’m going to start with the MTF curves of two excellent lenses: the Canon 70-200 f/2.8 IS II at 200mm and the Canon 200mm f/2.8 L lens. These are both really good, although slightly different. The older 200mm f/2.8 L prime isn’t quite as good in the center at higher frequencies, but clearly does better off axis, which is what we would expect from a prime lens compared to a zoom. 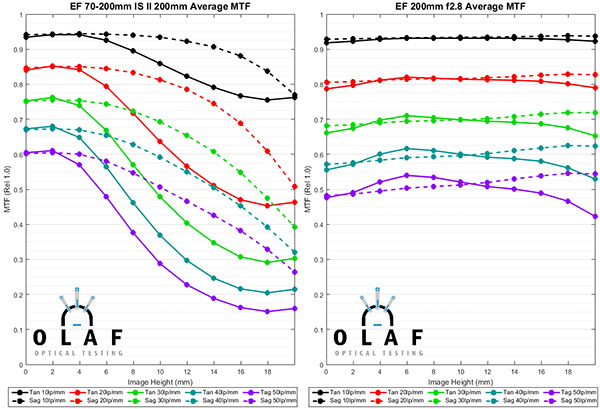 Those were very good lenses, but the f/2.0 prime lenses are just spectacularly good. 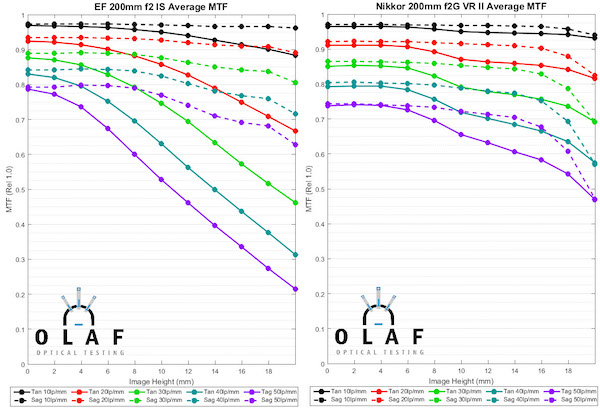 Even at f/2.0, their MTF is clearly better than either of the f/2.8 lenses. Any fanboys who want to claim one is better than the other are being pretty silly. They’re different, sure, with the Canon 200mm f/2.0 IS L is a tiny bit better at higher frequencies, but having more off-axis astigmatism than the Nikon 200mm f/2.0 VR II. But both are totally amazing. 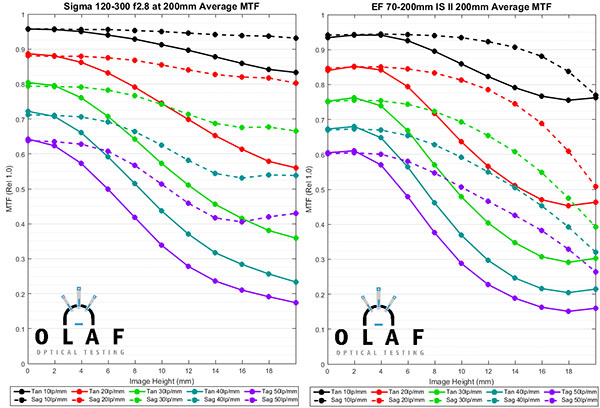 The overall the 200mm summary is pretty easy: they’re all damn good. And yes, I’m aware that everyone wants to know more about the 70-200 f/2.8 zooms. That post will be out in a week or two; I just put this one example up for a comparison point today.

I started off the 200mm section using some examples that a lot of people were likely to be familiar with, and I’ll do the same thing here. Below is the MTF curve for the Canon 300mm f/4 IS lens. It’s an older design, but one that’s pretty popular. I’ll put it beside the Canon 200mm f/2.8 we used above to give you a comparison point. The 300 f/4 IS is a pretty good lens, but the absolute resolution isn’t quite as good as the 200mm f/2.8. While we aren’t presenting consistency numbers with these lenses, we did do 10 copies of the 300 f/4 IS and it did show significant variation (Consistency 4.2 for the 300 f/4 IS, compared to 8.9 for the 200 f/2.8). 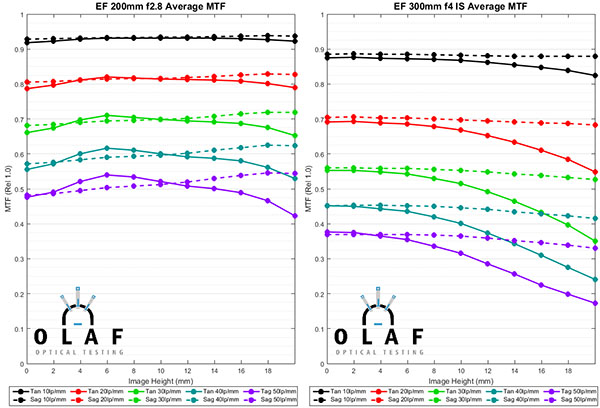 The 300mm f/2.8 lenses are pretty expensive, and the MTF curves show some of the reason why; they are amazingly good. Like the 200mm primes, the Canon 300 f/2.8 IS II and Nikon 300 f/2.8 VR II they are slightly different, although the differences are minimal. The Canon, again, has a bit better center and sagittal resolution, the Nikon has less astigmatism away from center giving it better tangential resolution, but these are nit-picking, pixel-peeping differences. They’re both incredible. 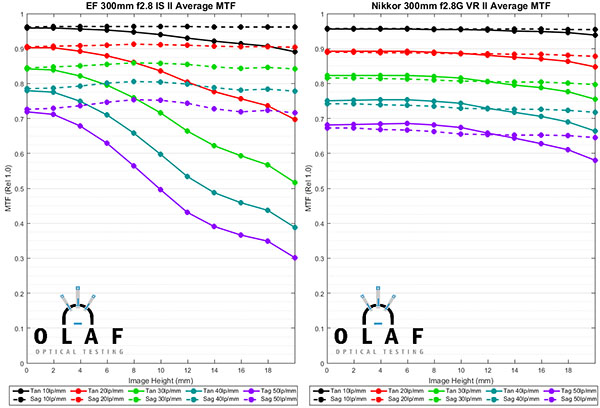 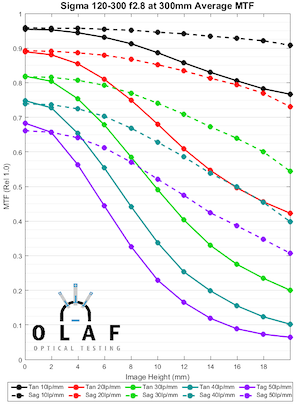 The Sigma 120-300mm f/2.8 Sport at 300mm surprised me again. I knew it was very good, but in the center it’s every bit as good as the two name-brand prime lenses. It drops off away from center, obviously, but even there it’s still very good. That’s amazing performance for a zoom lens. Obviously, there is a lot more that goes into choosing a 300mm lens than just MTF curves, but the Sigma puts in an amazing performance.

The 400m f/2.8 prime lenses are generally considered to be the absolute best lenses made. The MTF curves, which are at f/4, in my mind, suggest that they’re maybe a teeny tiny bit better than the 300 f/2.8s, but I’d be hard pressed to say I think you’ll see the difference in a picture. I do need to mention here that the aperture of the collimator in the MTF bench means these lenses aren’t being actually tested at f/2.8; the effective aperture is close to f/4. 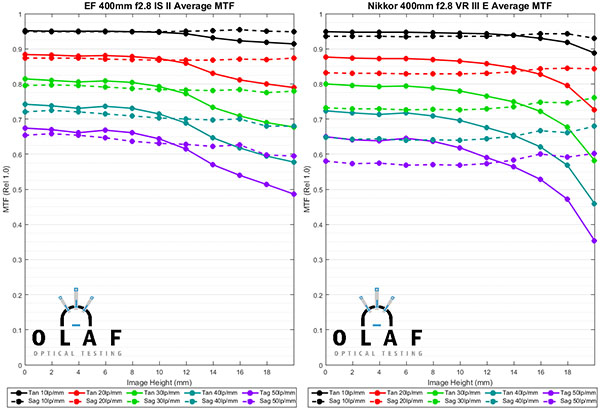 Not much, really. I learned the Sigma 120-300 f/2.8 HSM OS is really good; better than I thought it was. A lot of you already knew that. You may have learned that manufacturer’s MTF charts are sometimes better than any actual lens is (no copy of the supertelephoto lenses we tested approached the published MTF, period). Other than that, this post just documents what we already know. Super telephoto lenses set the high end of the MTF bar. They are as good as photo lenses get.