When we started this series, we introduced our methods using 24mm lenses, then followed up with looks at the 50mm and 35mm groups. Today we’re going to go back to the wide-angle lenses; the ones we expect to have the most variation of all. We probably should call this post the Zeiss Invitational, since they have by far the most wide-angle options. We also left a couple of the 24mm ‘ish’ lenses out of our opening post, so this post will include some of those, too. 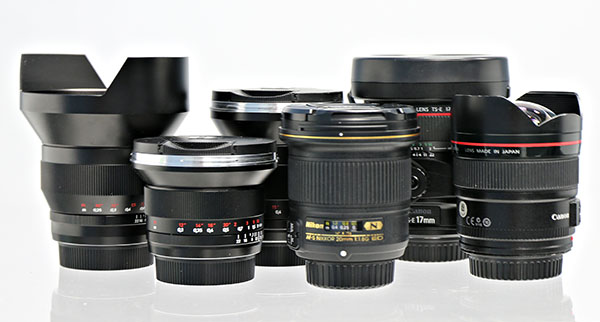 Most of the lenses we’ll discuss today are of fairly recent development; released after 2007. The price range isn’t too large, ranging from $350 to $2200. One thing that should be noted: ultra-wide angle lenses get very complex. A lot of people like to make the assumption that more expensive means some increased level of quality control and therefore less copy-to-copy variation. Truth is more expensive often means more complex and sometimes, even with better quality control, it means more variation.

We also are including some tilt-shifts (shot untitled and unshifted, of course) in the results today. Remember that tilt-shift lenses have other complexities that make them a bit more likely to have some sample variation, so they have a bit of disadvantage here.

Ten copies of each lens were tested on our Trioptics Imagemaster Optical Bench using the standard protocol, which we described in the introductory blog post. The Nikon 20mm f/1.8G is an exception – we don’t have 10 copies available so we settled for 5.  All lenses are tested at their widest apertures, so take that into consideration when comparing MTFs; stopping down a lens would improve its MTF, so consider that when you compare and f/1.8 lens to an f/4 lens or whatever. These are presented roughly in order of widest to longest. I’ve included the Canon 24mm f/1.4 Mk II at the end to even out the number of graphs. We’d already presented it in our original article but I thought including it here would give some quick and easy comparison since it was the best of the 24mm f/1.4 lenses. 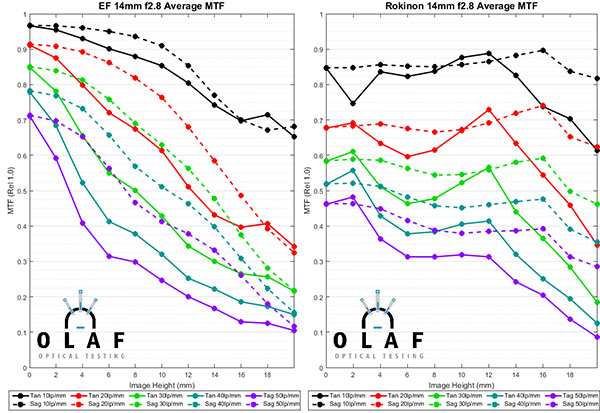 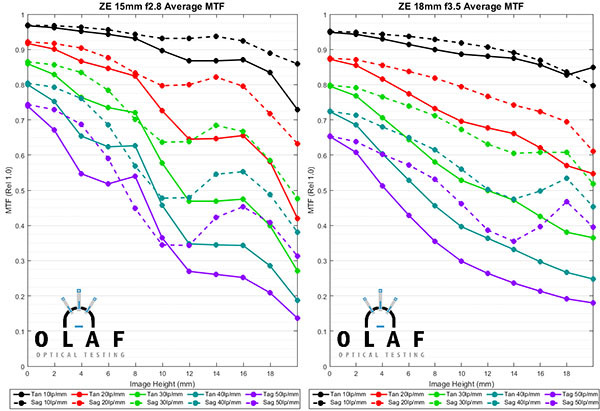 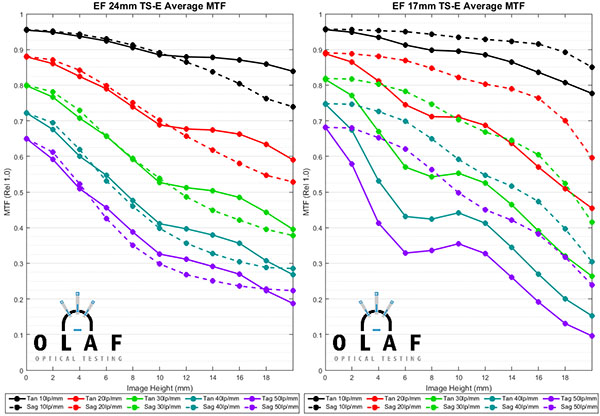 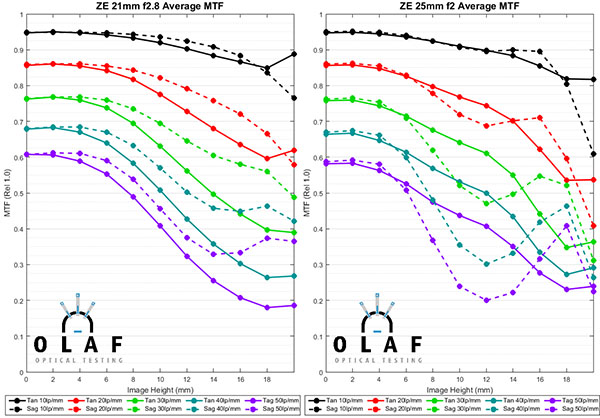 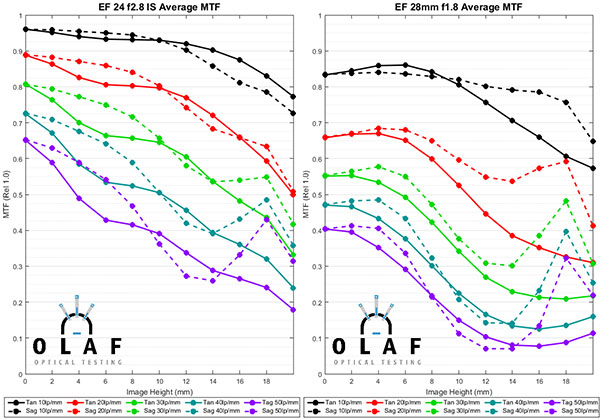 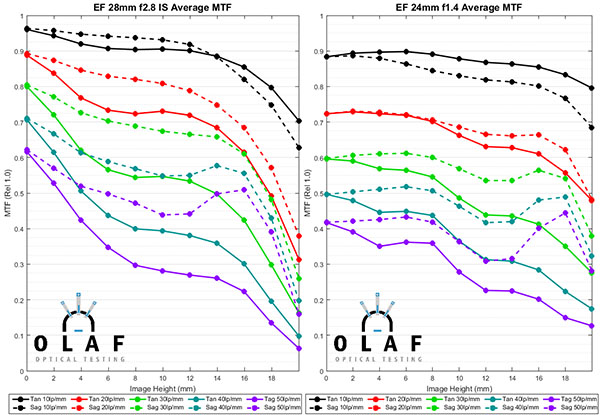 There aren’t a ton of surprises seen in the MTF curves of the wide-angle primes. As a general rule, the wider the lens, the more the MTF falls off away from center. Among the widest lenses, the Zeiss really do an amazing job. The Zeiss 15mm is clearly better off axis than the Canon 14mm f/2.8 L, and the Zeiss 18mm (from a pure MTF standpoint) is better than the 15mm.  The Rokinon 14mm doesn’t resolve in the center nearly as well as the others, but does keep that sharpness across the entire field of view. Off axis it is better than most of the other ultra-wide lenses.

All of the other lenses are pretty much excellent, with the exception, perhaps of the Canon 28mm f/1.8 lens. This isn’t surprising since this is a much older design and an inexpensive lens. The Zeiss 21mm f/2.8 looks just as good as one would expect (maybe better given it’s classic design). The Canon 24mm f.2.8 IS surprised me a bit, it’s actually a little better than the 28mm f/2.8 IS and I would have thought it might be a bit weaker.

Our expectation was that the ultra-wide lenses, and to a lesser degree the tilt-shift lenses, would have more sample variation than the longer focal lengths. Here are the variation graphs in the same order as the MTF charts above. 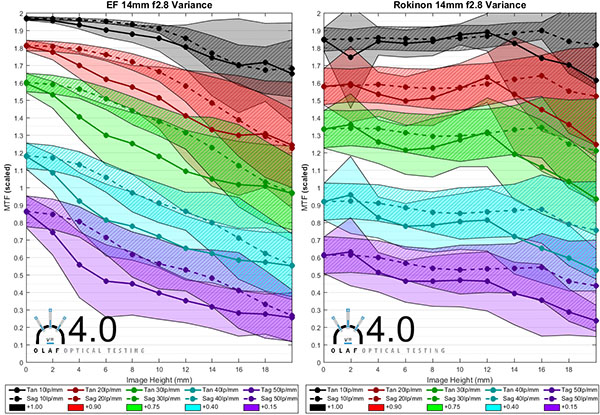 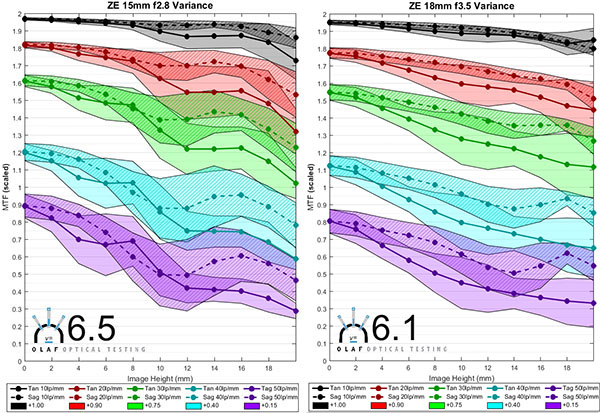 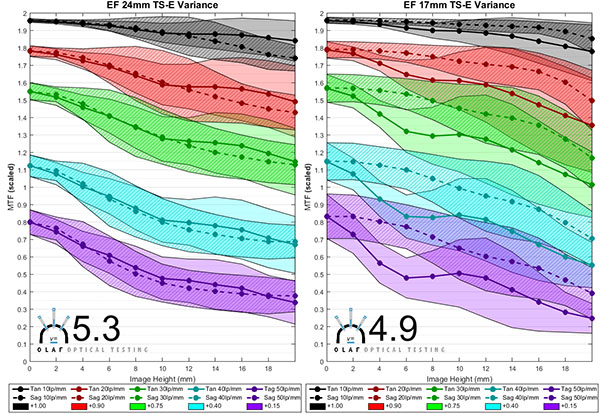 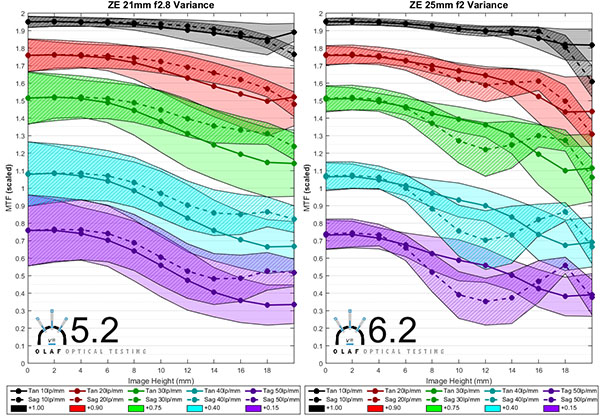 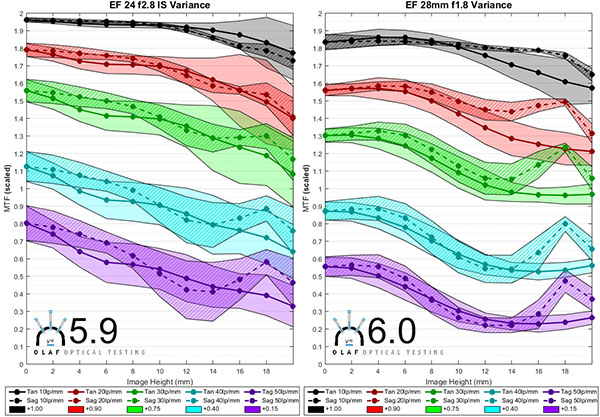 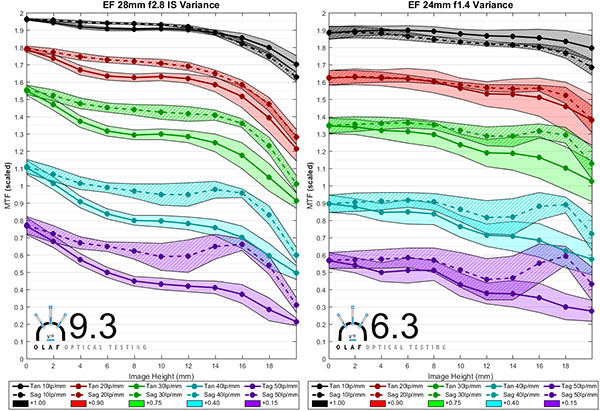 The first comment I have shouldn’t surprise many people. My experience with 14mm lenses meant I already knew they had a lot of copy-to-copy variation, and our tests certainly documented that. I was surprised that the Zeiss 15mm and 18mm lenses, despite being nearly as wide, had significantly higher consistency numbers (meaning less copy-to-copy variation).

If you’ve worked with tilt-shifts very much, you probably aren’t surprised to see there’s a bit of copy-to-copy variation with these lenses. There is a fair amount of mechanics involved in tilting and shifting that are going to add to variation. Not surprisingly, the variation curves show they are quite consistent in the center, but tend to have a bit of tilt as you go off axis.

The other lenses all did pretty well, and honestly much better than I expected. The one very pleasant surprise, with a Consistency score of 9.3, was the Canon 28mm f/2.8 IS. This lens isn’t particularly expensive but is amazingly consistent, much like the inexpensive Canon 50mm f/1.8 STM lens. Why it does so well (and better than the similar Canon 24mm f/2.8 IS lens) I can’t say. We’ve never taken a look inside it, but we’ll be correcting that shortly.

We’ve published results for 35 prime lenses so far, with another 15 or so on the way. I can’t say the results have surprised me greatly, but then I repair and optically adjust lenses all day. Most of the surprises I’ve gotten from this data, though, have been positive surprises. There are some amazingly consistent prime lenses with little copy-to-copy variation and they are often relatively inexpensive and excellent lenses. To keep you caught up, here are the consistency numbers for all the lenses we’ve tested so far in a sortable form — just click on the top row to sort by brand, aperture, or focal length.

Please don’t make a lot of generalizations yet. This is a big, ongoing project, and this is still less than half the data. I think speculations are interesting, and I do think the information is useful. We’ll be publishing the data for longer focal length lenses soon. Then we’ll follow up by looking at some of the wide-aperture lenses stopped down to see how much copy-to-copy variation decreases as the aperture stops down.

And remember, the consistency number is just a massive compression of other data — you’ll get a lot more information looking at the variation graphs than the consistency number. Philadelphia and Phoenix both have population numbers of about 1.5 million, but that doesn’t make them the same.

We’ll also continue to update this table of Consistency scores so there’s a single, long-term reference for you to go to. And hopefully, within a couple of weeks we’ll complete arrangements for there to be a comparison tool so you can look at MTF and Consistency graphs side-by-side when you’re trying to make lens decisions.

Tweet
Posted in Lenses and Optics
Second Shooting a Wedding: What I Use When Gear Is Unlimited
Variation Measurements for Telephoto Lenses