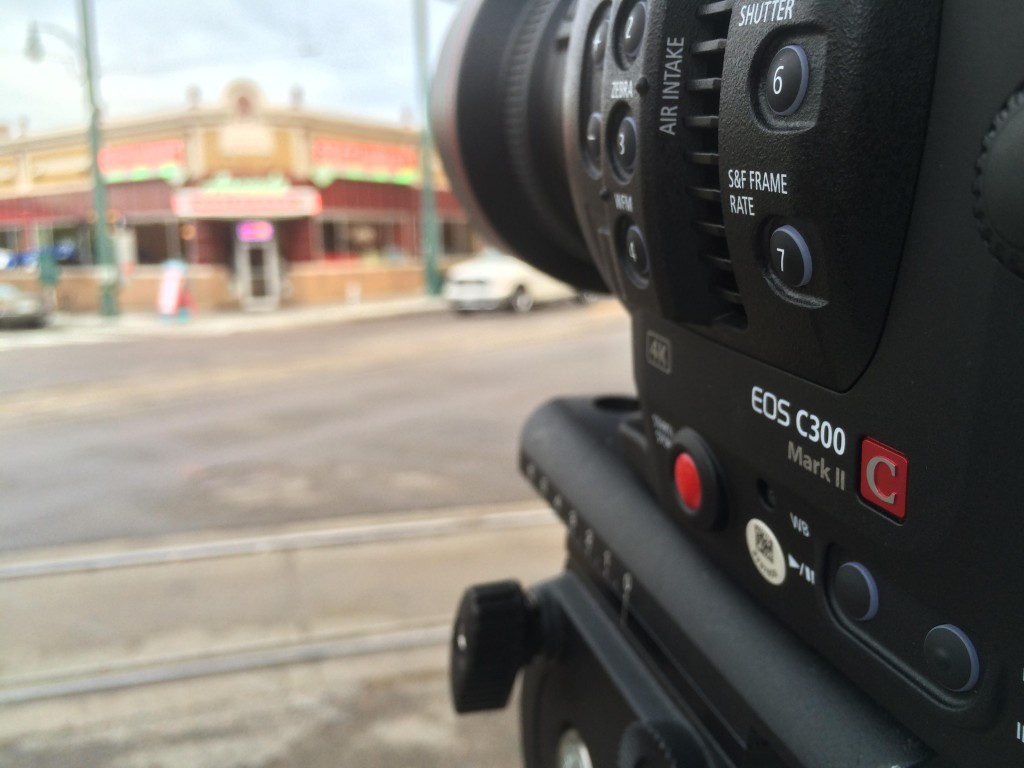 This weekend, I had the opportunity to take the eagerly anticipated Canon C300 Mark II out for a test shoot in downtown Memphis. Here are some of my initial impressions.

The original Canon C300 has always been one of my favorite products in our inventory. I do a lot of short documentary work, and the form factor of that camera lends itself beautifully to that style of shooting. With the side handle, top handle, and monitor unit attached, you have a really versatile and mobile setup without having to deal with a bunch of additional accessories. Luckily, Canon kept the design of the Canon C300 Mark II almost the same, save for some welcome improvements. A lot of these changes are things that I wouldn’t even have thought to ask for, but that lead to a more polished, professional-feeling product.

The top handle, for example, now connects to the camera with two heavy-duty Allen screws on either side of the body, as opposed to the original, which used a single ¼ 20 thumb screw. The DC input on the Mark II is also a step up. It’s now a LEMO connection, instead of the standard barrel on the Mark I. LEMO connections, for those of you who are unfamiliar, have locking mechanisms and are generally more durable and reliable than the barrel type connections you see on most other video cameras. The most significant design change, though, is in the cables that run from the monitor unit to the camera body. Rather than being attached to the monitor unit like they were on the Mark I, they’re now completely independent, so if anything goes wrong with the cables you can switch them out for spares rather than sending the whole monitor unit in for repair. I imagine Canon will also have longer cables available in the future, which would be handy for gimbal work. I could go on and on listing these minor but significant enhancements, but my overall point is this: Canon kept everything that was great about the build of the first Canon C300 and made it all just a little better. 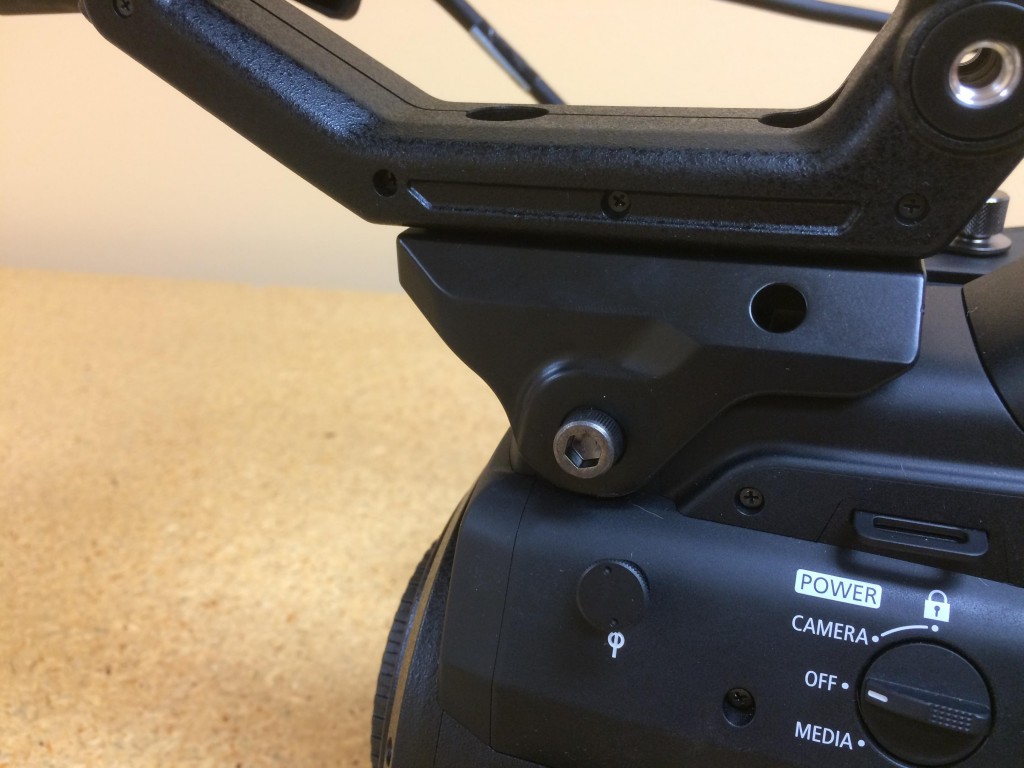 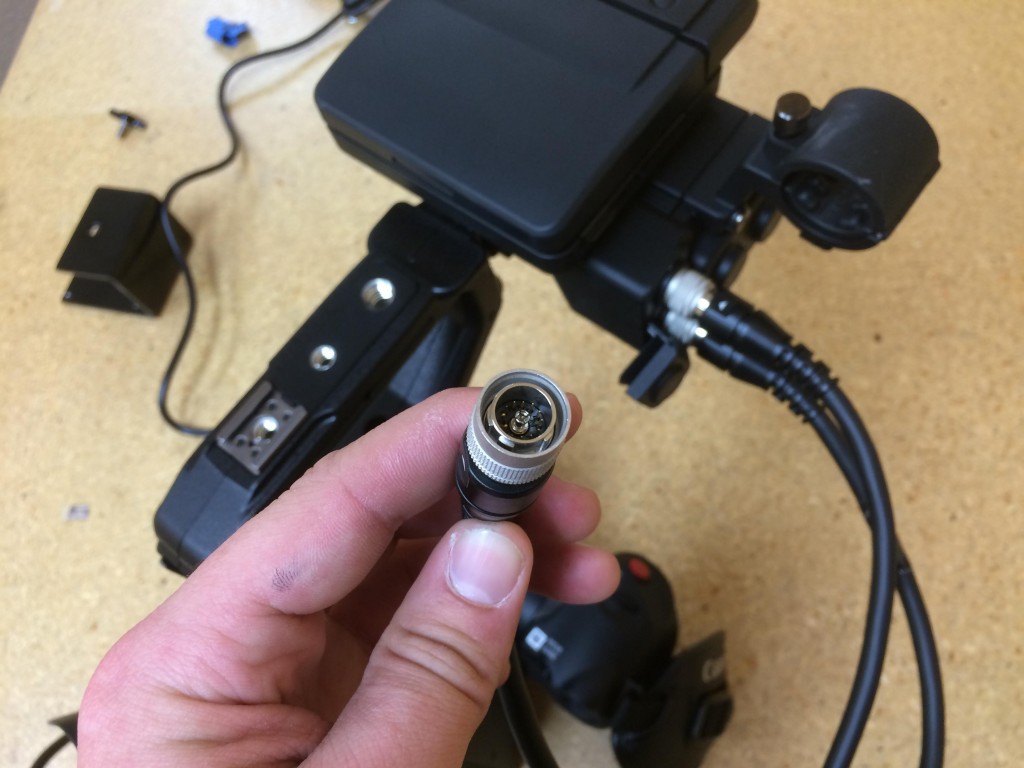 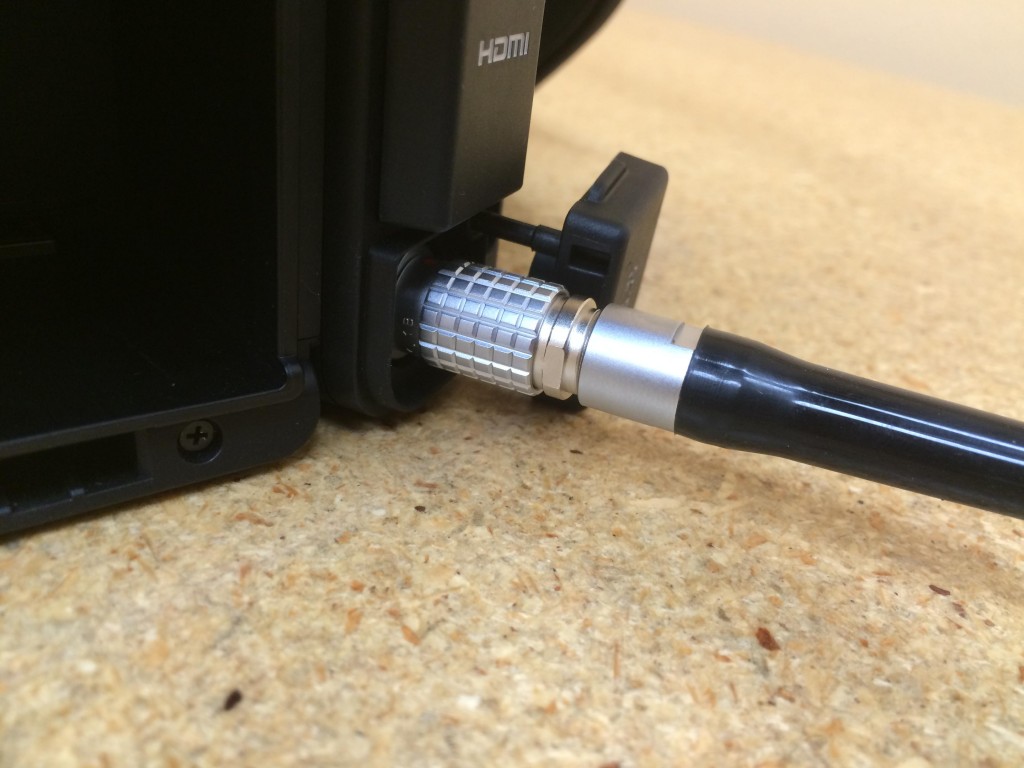 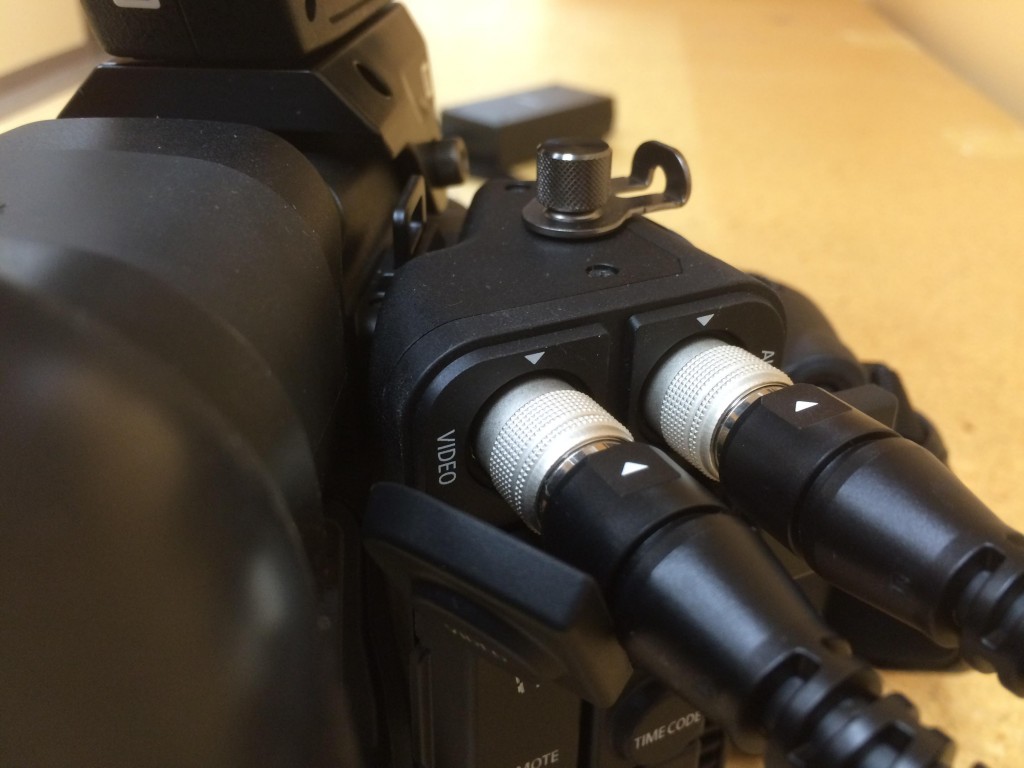 The full specs are available on the Canon C300 Mark II’s product page, but I’ll hit the highlights here. First things first: you’ll be able to shoot internal 4K, both DCI (4096×2160) and Ultra HD (3840×2160) to CFast media. Though we’ve had some trouble with CFast in the past, it’s quickly becoming a standard and will only get cheaper and more reliable as time goes on. That internal 4K footage will be 10-bit 4:2:2 with a bit rate of 410Mbps using the XF-XAVC codec. The C300 will also record 12-bit RGB 4:4:4 footage in 2K/HD at up to 30p, which could come in very handy for green screen work if 4K isn’t necessary. Lastly, you’ll be able to output RAW to an external recorder such as the Odyssey 7Q while simultaneously recording 4K proxies to CFast media or HD proxies to SD cards. Most importantly, though, you’ll get an impressive 15 stops of dynamic range out of the sensor. This, combined with Canon’s new C-log 2 gamma setting, will allow for an exceptional amount of flexibility in post. I won’t go into too much detail here, but if you’re unfamiliar with grading C-log, there are plenty of resources online to get you started.

As far as frame rates go, you’re limited to 30p or below in 4K, unfortunately. If you need to go higher than that, the Mark II will shoot up to 60p in 2K with a full sensor scan and up to 120p with a 2X crop. This is going to be a sticking point for a lot of people, especially considering that Sony’s FS7 will do 60p in 4K at a significantly lower price point. What you don’t get at that price point, though, is Canon’s well-respected color science. Many people actually had similar complaints about the original C300, which had somewhat underwhelming frame rate options when it was released. It’s become an incredibly popular camera though, because the picture it produces is so impressive. I expect a similar reaction to the Canon C300 Mark II, but it would be really nice to have 60p as an option.

Surprisingly, the thing that impressed me most in my time with the Canon C300 Mark II had nothing to do with resolution, bit rate, or dynamic range. Digital video technology has improved so much in just the last few years that those specs, while enormously important, aren’t enough on their own to make me choose one camera over the other. There are simply so many great digital cinema cameras on the market right now that it takes a wholly original feature to make a camera stand out. In the case of the Canon C300 Mark II, that feature is autofocus. Sure, if possible, you’re always going to be better off with a dedicated focus puller. That’s not always an option, though, especially for solo operators like me who value mobility and speed over precision. On the documentary side of things, you can’t reset and try again if your focus is off, and that means having reliable continuous autofocus is invaluable. The Canon C300 Mark II takes the same dual-pixel autofocus technology from the Canon C100 Mark II and adds perks such as face tracking for non-STM lenses, variable speed and sensitivity settings, and autofocus-assisted manual focus, which helps you quickly confirm and adjust focus with manual lenses. I could honestly write a whole second post just about the autofocus performance of this camera, but I’ll leave it at this: it’s really impressive, and I think it makes the Canon C300 Mark II the best documentary camera we carry.

Below, is a quick cut I put together of some of the shots I got this weekend. Everything was recorded internally at 23.98, DCI 4K, 800 ISO, in C-Log 2 unless otherwise noted. Obviously none of these are scientific tests, but I think you can tell that Canon’s claim to 15 stops of dynamic range is pretty accurate. I actually found myself under exposing the first few shots of the day in an attempt to preserve my highlights because I’m used to working with closer to 12 stops. I could easily have opened up a stop without clipping the whites, but the 10-bit 4:2:2 footage grades easily enough that it didn’t end up being a problem. One thing I did notice, though, was a bit more noise in the shadows than I was expecting at native ISO. It’ll take some more testing to figure out what caused that, but here’s hoping it’s a solvable problem. For comparison, I included a graded cut as well, nothing too fancy, just a simple LUT and some exposure adjustments. Let me know what you think, and feel free to give us a call if you have any questions about the Canon C300 Mark II. Except for the annoying lack of 60p 4K, I think Canon really hit the nail on the head with this one, and I look forward to seeing what people do with it.

To give some clips a try in your own workflow I invite you to download and edit this sample footage.