OK, for the first time I can remember, I’ve been browbeaten into doing a test I didn’t plan to do. When Tamron released their neat little Tamron 35mm f/1.8 SP Di VC and Tamron 45mm f/1.8 SP Di VC lenses, I thought, well that’s interesting, and the price point is reasonable and didn’t think about them anymore. But I got enough emails, notes on other lens tests, and all around forum nagging to test them on our optical bench that I caved and did them last week. Now I do see the attraction. 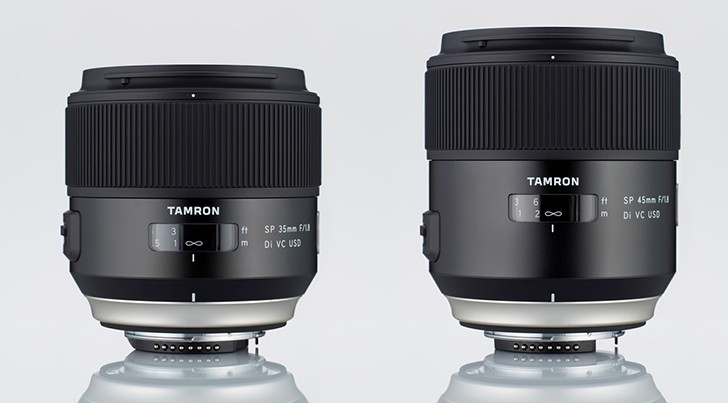 We did our usual optical bench MTF testing, using 10 copies of each lens to arrive at the average MTF chart and variation scores. If you don’t know what all that entails, please read our earlier post on testing methods.

You didn’t read it, did you? That’s OK. If you don’t speak MTF, don’t worry. It’s not hard. Higher on the vertical axis is better. Dotted and solid lines of the same color close together are better (far apart is astigmatism). The horizontal axis goes from the center of the lens at “0” to the edges of the lens at “-20” and “+20”. Lower lp/mm have an association with strong contrast while higher lp/mm are associated with an ability to resolve fine detail. So, without further ado, here are the MTF curves. 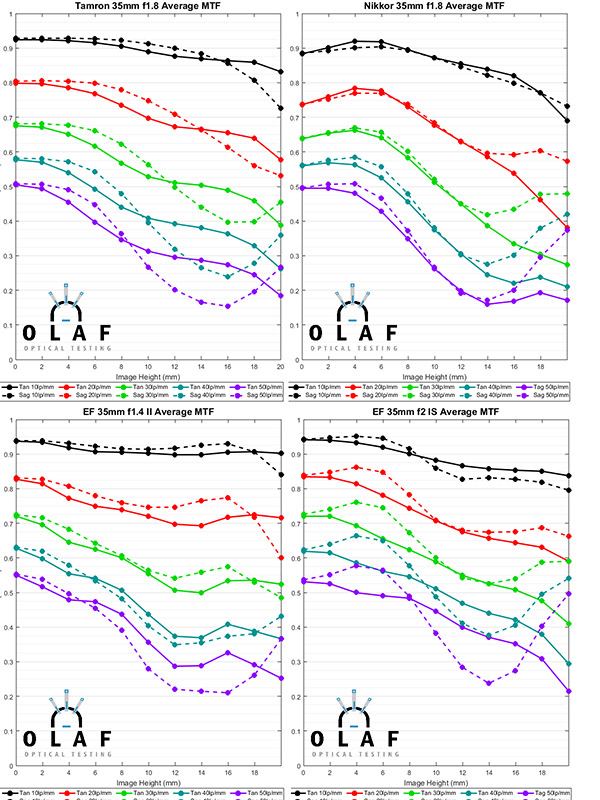 Some of these comparisons aren’t quite fair (the two Canon lenses are either tested at wider or narrower apertures, and, of course, the 35mmf /1.4 II is at a very different price point). But basically the Tamron 35mm f/1.8 is competitive with the other 35mm prime options. It’s probably just a bit better than the Nikon 35mm f/1.8 and competitive with the Canon 35mm f/2 IS (the Canon’s a tiny bit better on the MTF charts, but remember it’s being tested at a slightly smaller aperture, which helps MTF).

Overall, it’s a good showing by the Tamron. On the other hand, the Tamron is about the same price as the Canon and Nikon lenses. I’m not sure the f/1.8 to f/2 difference would make me pick a third-party lens over the Canon. The Vibration Control might be a strong advantage for some people on the Nikon said, but not all that many, probably. 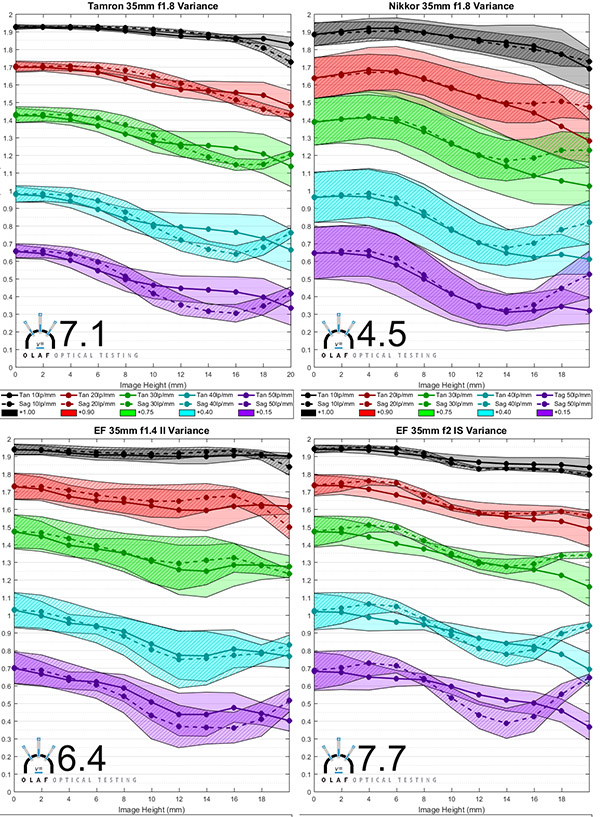 Variation graphs are quite positive for the Tamron. It certainly is more consistent copy-to-copy than the Nikon 35mm f/1.8, which has a lot of variation, and very similar to the Canon 35mm f/2 IS lens, which we consider to be excellent.

We don’t have a lot of other 45mm lenses to compare, so I used some similar aperture 50mm lenses for this comparison. This does cause a little role reversal because the Tamron is now by far the most expensive lens in this comparison. On the other hand, it’s the only one that has Vibration Control, too.

The Tamron is clearly better than either of the other 50mm f/1.8 choices as far as the MTF curves go. It was so good I decided to also compare it to one of the better (and more expensive) 50mm options, the Sigma 50mm f/1.4 Art. The Sigma is at a bit of a disadvantage here, being tested at a wider aperture, but still the Tamron is very competitive with the Sigma, which is a superb 50mm lens. Plus, the Tamron still has vibration control. 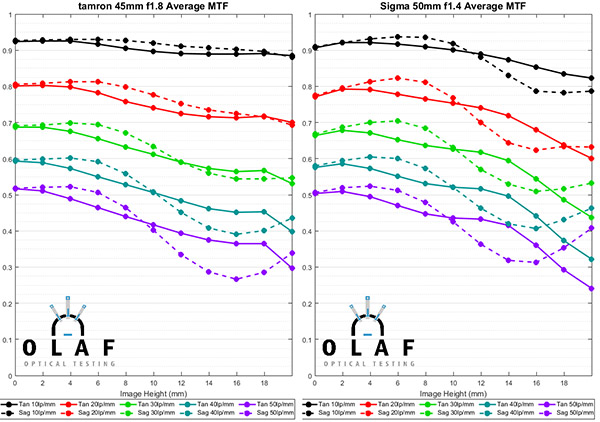 The Tamron 45mm f/1.8 demonstrates pretty remarkable consistency, one of the most outstanding lenses we’ve tested as far as low copy-to-copy variation is concerned.

Well, I have to admit, for some lenses I didn’t want to bother testing, the new Tamron VC primes are eye openers. Let me be clear, I haven’t done anything but test them on the optical bench, I haven’t taken a single picture with either of them. But the bench-test results are pretty impressive. Both lenses show excellent sharpness. Combine that with vibration control at a reasonable price and I suspect that more than a few people are going to be very interested in these two lenses.

There is one caveat that needs to be shouted loud and hard, though. The obvious use for these lenses is shooting in low light situations: night clubs, bands, street shooting at night. For many photographers, low light autofocus performance is going to be of critical importance to that kind of work, and I wouldn’t rush out and buy one until you read some reports about how these lenses perform in that regard. But the MTF curves certainly indicate these are lenses worth investigating.

NOTE: For those of you who want to look at other lens MTF comparisons, I just wanted to remind you that all of our MTF and variance graphs are available through The Digital Pictures Comparison Tool.

Tweet
Posted in Lenses and Optics
The Challenges of Transitioning into Video with your DSLR
Canon 35mm f/1.4 Mk II Teardown