My view of lenses is often colored by measurements, numbers, taking them apart, and other geeky things. I also take photographs with them. One of the things I’m always interested in is comparing my measurements with actual photographs.

When Uwe Steinmueller from The Digital Outback suggested we compare the same lens from both perspectives it sounded like a great idea to me. Uwe would write his assessment of the lens from a photography standpoint, I would write a bit about its testing and measurements.

He suggested we start with the Nikon 24-120 f/4 VR. It’s a lens he really likes for obvious reasons: it’s relatively small, covers a very useful range, and has superb vibration reduction. For him it provides a superb one-lens solution.

I’ve considered it an “OK” lens. I understand the attractions but was less than excited about its distortion, chromatic aberration, and borderline corner resolution. It’s not a bad lens by any means, but not one that made me ‘ooh’ and ‘ah’. 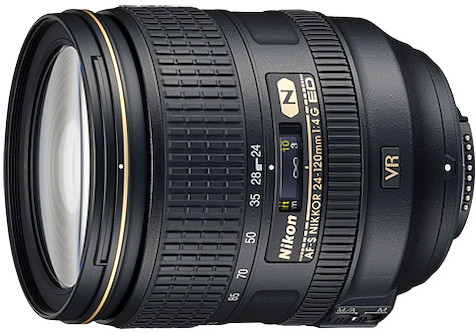 When I first evaluated the 24-120 for use with the D800, I tested it only at it’s extremes (24mm and 120mm) so I went back with a couple of copies and repeated Imatest at several different focal lengths.

First we’ll look at the 24-120’s Imatest MTF 50 at 5 focal lengths. The table below shows MTF50, measured in line pairs/image height for raw files at the center, averaged over the entire lens, and the average of the 4 corners.

It’s apparent the lens is quite good in the center, although it’s not quite as sharp at the long end. The corners are OK, but on a D800e I’d really like to see resolution of 500 line pairs / image height and these aren’t quite there.

We’ve repeated them at f/5.6 to see how much benefit the lens gets from closing the aperture a bit.

The center, which was already quite excellent, doesn’t really improve with stopping down much except a bit at the long end. The corners do sharpen up nicely at f/5.6 and from a pure MTF 50 standpoint I’d call them acceptable at this aperture.

Like most 5X zooms, there is a fair amount of distortion. The lens has 3.5% barrel distortion at 24mm which zeros out by 35mm. Almost immediately, though, pincushion distortion sets in, reaching 2% at 50mm and staying right there through the end of the zoom range.

There is a fair bit of vignetting at both ends of the zoom range, but it’s not awful by any means. Vignetting isn’t nearly as strong in the central part of the zoom range (30mm-80mm or so). There’s also a good bit of chromatic aberration in the corners throughout the zoom range and even when stopped down.

The usefulness of a 24-120mm lens, with excellent vibration reduction and excellent center sharpness, can’t be argued. That makes it the perfect lens for a lot of people.

However, the corners are rather soft at f/4, becoming acceptable at f/5.6. Distortion and chromatic aberration are easy to remove in post processing, obviously, but doing so reduces resolution a bit. So looking at the numbers I wouldn’t recommend this lens for people who need sharp corners and edges, like landscape or architectural photographers.

However, Uwe’s article clearly demonstrates that with careful postprocessing the images shooting the 24-120mm on the D800 are really quite good. I think to some degree this is because the D800 allows such great resolution. Even average corner sharpness can look good dressed up in a D800 outfit. I also think good postprocessing is wringing every bit of resolution out that is there. I suspect out-of-camera jpgs are not quite as good as Uwe’s postprocessed images.

And again, for many people using this lens, the corners aren’t critical for their photographs anyway. They would, I think, they’d be very happy with images right out of the camera.