We get a lot of questions about sensor sizes and crop factors.  Most people know the difference between a standard (APS-C) crop sensor and a full-frame sensor. Not many, though, know how much smaller a 2/3” sensor is than a 4/3 sensor, and fewer still the difference between those and a 1/1.8” sensor. Plus Canon and Nikon have thrown new sensor sizes into the mix in the last year and a lot of people aren’t sure exactly where those sensors fit in among the better known ones. Hardly a day goes by that someone doesn’t ask if the Fuji X-10 sensor is bigger than the Nikon J1 sensor. Is the Canon GX-1 sensor as big as those or more like a point and shoot?

The problem is even more complicated now that SLR lenses are being used on video cameras and video lenses on SLRs cameras. People want to know things like “is Super 35mm format equivalent to a crop sensor or full-frame?” Other people, trying to sell their 16mm film lenses with adapters for 4/3 cameras fail to mention how much smaller 16mm film was than 4/3 sensors. Not to mention the marketers, always ready to make things as confusing as possible, are doing things like calling a 1/1.7” sensor “large” (it is compared to a cell phone camera chip, I guess).

Anyway, since I haven’t been able to find a single source to answer all these sensor format questions, I thought I’d put it all together here. The table below shows the dimensions, in millimeters, of the various sensor (or film) sizes. Please note that the dimensions may vary slightly from camera to camera. For example, Canon’s APS-C sensor is slightly smaller than Nikon’s, but slightly larger than Sigma’s. The aspect ratio of the sensor (4:3, 3:2, 16:9) will cause some variation, too. For example, the 35mm Cinema, Super 35mm, and APS-C crop sensor formats are nearly the same size (look at the sensor area) but of slightly different rectangular proportions.

First, About those inch (“) sensors

Commonly used sensor abbreviations make absolutely no sense. (Get it, “sense”, “sensor” – I have to have at least one pun per article. It’s in my contract). Larger sensors are measured in millimeters: full-frame, Super 35mm, APS-C, etc. The 4/3 marketing people probably thought “half as big as full frame” wasn’t a good way to present things, so 4/3 it was. But it’s easy to find how big a 4/3 sensor is in mm.

But then we get into all of these fractional-inch-type-measurements for the smaller sensors. That measurement system originated in ancient times (the 1950s to 1980s) when vacuum tubes were used instead of CCD or CMOS sensors in video and television cameras. The image sensor was, in those days, referred to in terms of the outside diameter of the vacuum tube that contained it.

Why do manufacturers keep using such an archaic measurement? Because it helps them lie to you, of course. If you do the math 1/2.7 equals 0.37 inches, which equals 9.39 mm. But if you look at the chart above you’ll see that a 1/2.7″ sensor actually has a diagonal of 6.7 mm. Why? Because, of course, a thick glass tube used to surround the sensors. So they calculate the sensor size as if the glass tube was still included. Makes perfect sense to a marketing person who wants to make their sensor seem larger than it is. What sounds better: 1/2.7″ or ‘less than 10% the size of a full frame sensor’?

Calculating the Crop Factor from the Sensor Diagonal

OK, that’s pretty easy. But what if you are shooting video with a 50mm lens on an APS-C size camera, and want to frame the shot identically on a camcorder with a 2/3″ sensor? Well you could probably convert back and forth from APS-C to full frame and then to 2/3″ sensor using the handy table I made for you above. But you might have noticed in that table that the diagonal measurement of the sensor size is proportional to the crop factor. For example, 43.3mm (full frame sensor diagonal)  / 22.4mm (4/3 sensor diagonal) = 2, etc.

The numbers for crop factor and diagonal measurement of the sensors minimizes the actual differences in sensor sizes. If you want to really understand how much larger one sensor is than another, look at the column for the surface area of the sensor. The diagonal measurement and crop factor of a full-frame 35mm sensor is only 1.5 times longer than an APS-C camera, and twice the size of a 4/3 sensor. But the area of the full frame sensor is more than double that of a crop sensor, and almost 4 times that of a 4/3 sensor. 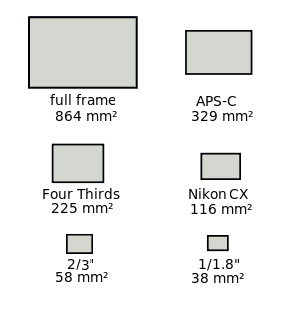 If the resolution of the cameras are the same, larger sensors mean larger pixels resulting in better ISO performance. (You can compare pixel sizes for a 12 Mp Nikon D700 and a 12 Mpix 4/3 camera by just pretending the above sensor size diagram is pixel size – no wonder there’s a difference in high ISO perforamance). Or, instead of bigger pixels on the sensor, the manufacturer may put more pixels, which gives the camera higher resolution. Or some of each. Most full frame cameras have both more pixels and bigger pixels than most 4/3 cameras.

There are other factors involved, of course. Newer sensors have better microlenses and newer cameras better computer chips, both of which can make a big difference in high ISO performance. Underexpose the picture two stops and ISO performance doesn’t matter either – you can’t differentiate black from black. Put a crappy lens in front of the camera and the sensor’s resolution doesn’t matter – the camera can’t photograph what the lens doesn’t resolve. If you’re just putting web-sized jpgs up none of it matters much. If you’re making large prints every bit of it matters a lot.

But the area of the sensors explains why so many video people are abandoning their old camcorders and picking up AG-AF100s, Sony F3s, and video capable SLR cameras in droves. As an example, consider that a few years ago a very good $15,000 camcorder came with 2/3″ sensors (58 square mm in area). Today, about the same amount of money will get you a Sony F3 with a Super 35 sized sensor (339 square mm in area, nearly 6 times larger), or 5 or 6 crop sensor SLRs with roughly the same size sensor.

It’s also interesting to look at some new mirrorless and fixed-lens camera systems in terms of sensor size. Nikon chose to create the CX sensor size for it’s new J1/V1 cameras. The reason is obvious: there was a large gap between the smallest SLR sensor (4/3) and the largest video (2/3″) and point and shoot (1/1.7″) sensors. The CX sensor fills that gap nicely. The CX sensor should be better than any point and shoot, but not so good that it takes business away from their SLR cameras. (There’s an old saying that if you don’t eat your own lunch, somebody else will. But apparently Nikon doesn’t believe in that.) The Fuji X10 is using the very largest non-SLR sensor, the 2/3″, which until now has only been used in video cameras. Canon, on the other hand, is releasing their G1X with a sensor slightly larger than the 4/3 sensors, although still smaller than their APS-C cameras.

There’s a lot more to a camera than its sensor size, of course. Lenses come to mind. (Yes, Sony, I’m talking to you. Other companies are getting rich selling decent lenses and adapters to shoot on your mirrorless cameras.) It will be interesting, though, to see how the choice of sensor size affects the image quality of these new cameras. Software algorithms, electronics, and better microlenses all make a difference, but small pixels are still small pixels.

But we’ll discuss the effects of sensor and pixel size more in the next article.

Patrick’s comment made me consider that while I unconsciously group sensors into categories, I didn’t really present that in the article. So maybe it will help if I do it here: