You probably know we got 5 copies of the Canon 24-70 f/2.8 II today and did some resolution testing before they all shipped out. If you read this blog often, you probably know that Aaron and I gave every lens a careful shake, peered inside, and generally looked for any possible excuse to open one up for ‘repair.’ Sadly, all 5 copies were sharp and had no flaws. Even after a second look.

But then we realized Kristin and Tyler had a baby yesterday (congratulations!!!!) so they aren’t here. Drew is running the place by himself and far too busy to check and see if the guys in the repair department are taking something apart they shouldn’t. So as long as the lens got put back together and shipped out on time, who would know?

Seriously, though, I really, really wanted a look inside this one. I’ve written for years about how much copy-to-copy variation there is in the original 24-70 f/2.8 and how it requires optical adjustment almost any time it’s dropped or misused in the slightest. 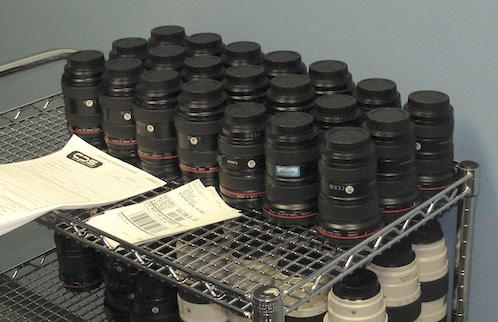 So I wanted to look inside and see if things might be different with the new lens.

I put this part separately because I’m convinced the front element design of the original 24-70 f/2.8 accounted for a lot of its problems. The front element is a big, heavy piece of glass, but in the original version it is also the element that is adjusted for centering via screws around the edges.

It also adjusts for spacing from the other elements via a sliding ramp. 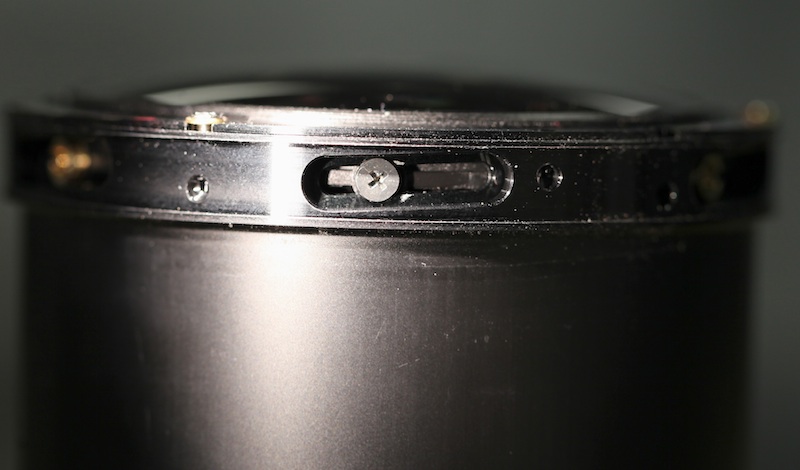 Finally, it has a set of eccentric collars that adjust the tilt of the element. 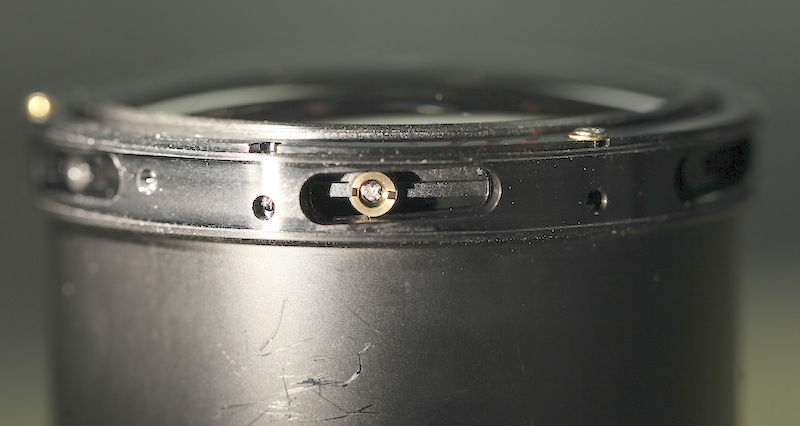 Collars to adjust front element tilt in the original 24-70

Given all of that adjustability involving the front element, I’ve never found it surprising that the original 24-70 was bad to drop. It often appeared fine after being dropped, but had actually become decentered and image quality suffered. The bottom line of all this is that I hoped the new lens had a different design for the front group. Guess what?

The New Lens has a Different Design for the Front Group

It has a new design for almost everything else, too. But let’s start at the front. As usual, Aaron is doing disassembly honors while I take pictures and make helpful suggestions like, “Don’t tear that flex.”

After peeling off the makeup ring, there’s a sturdy set of 6 screws holding in the front element (versus 3 centering screws in the old version). 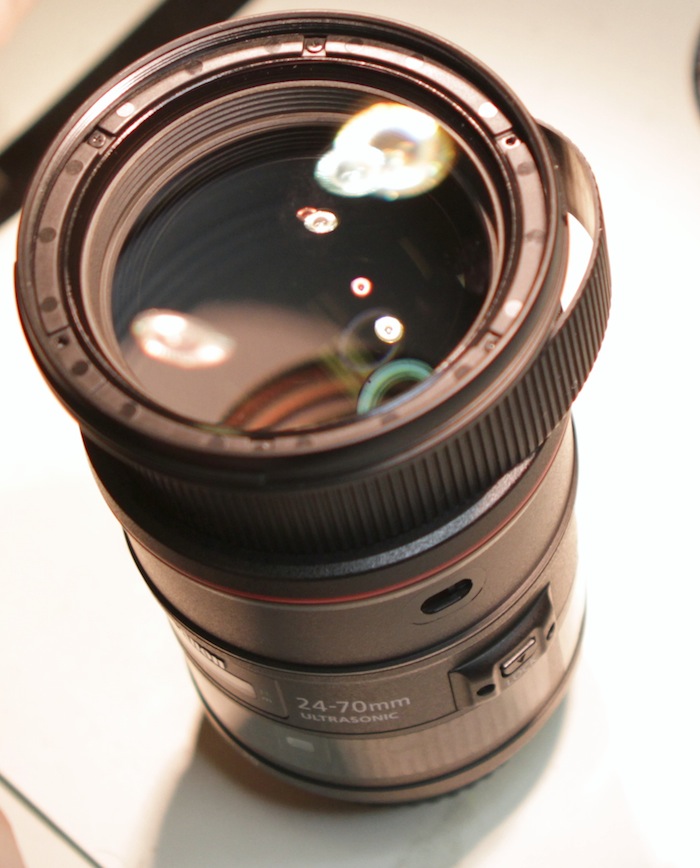 Take those out and the front element comes right out. There’s a strong molding ring around the seating areas and long screws used to hold it in place. 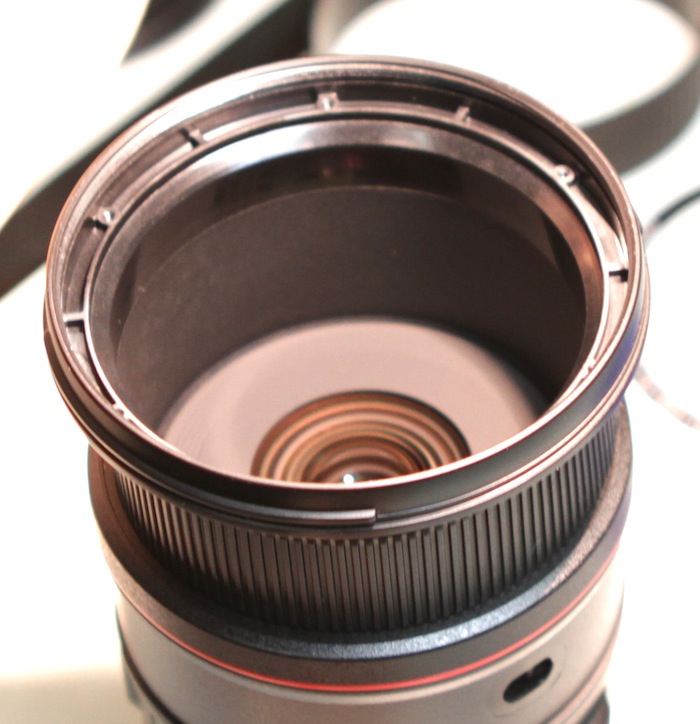 There are no adjustments on the front group. It’s permanently sealed in a heavy plastic mold that seats firmly into the lens mount.  If this lens drops you might crack a filter ring, but I can’t imagine decentering the front element.

Around to the Mount End

With the lens mount removed, the circuit board and flex cables show. Now this is the kind of thing that really makes no difference, but I do like to see someone took the time to design all of the cables so they fit neatly, not requiring glue to hold them in place and crisscrossing each other. 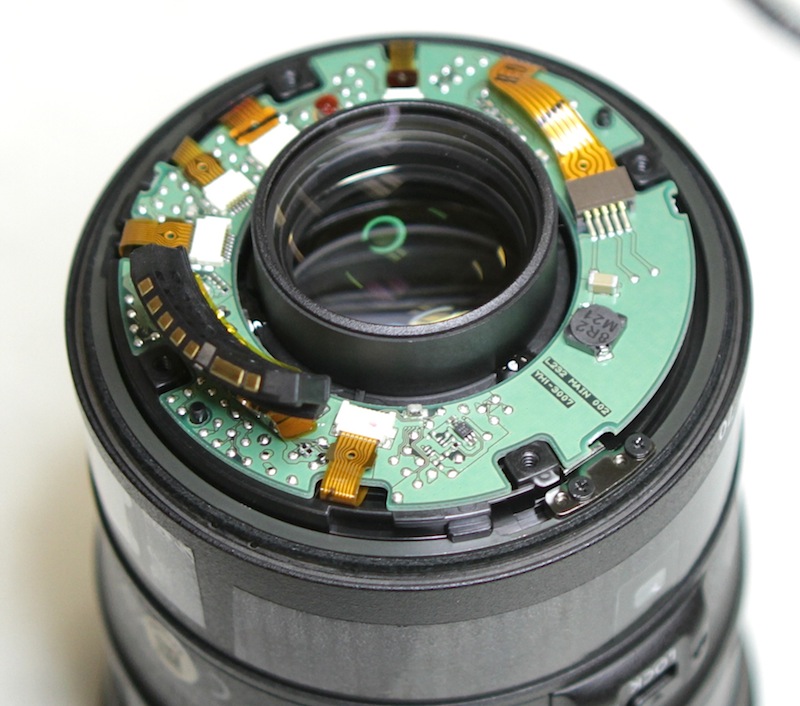 With the flexes disconnected and the circuit board removed we see the rear barrel mount. Again, I’m seeing that little bit extra that I’d hoped to see. There are multiple long screws holding everything in place, not the usual 3 or 4. This is all plastic, but it’s thick, heavy plastic, not the thin plastic mounts I worry about breaking or stripping. 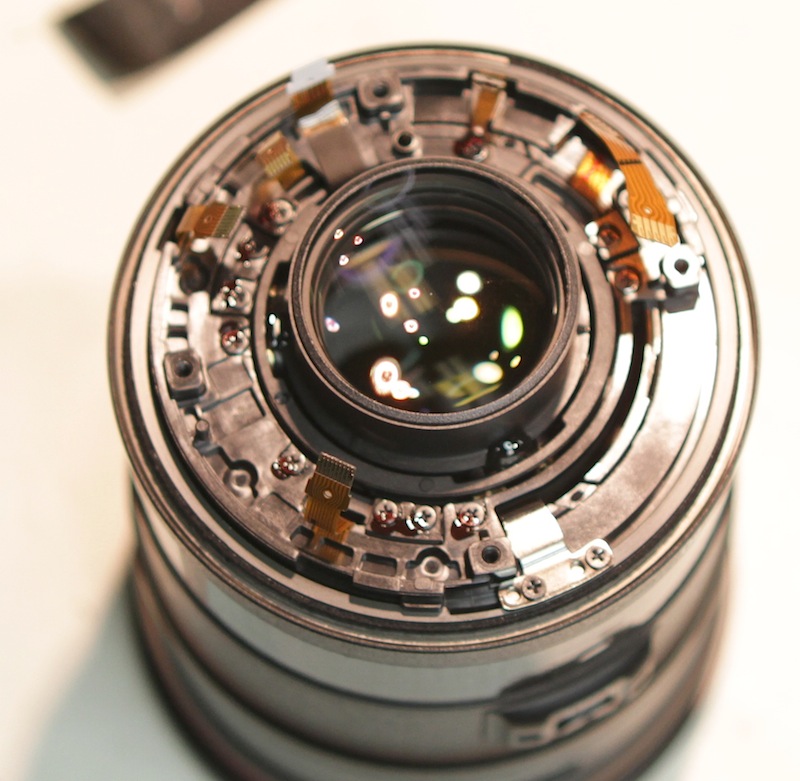 Removing 6 screws, the zoom brush on the side (not shown), the zoom keys, the external barrel and rings come off in one single piece containing the switches  (sorry about the focus) . . . 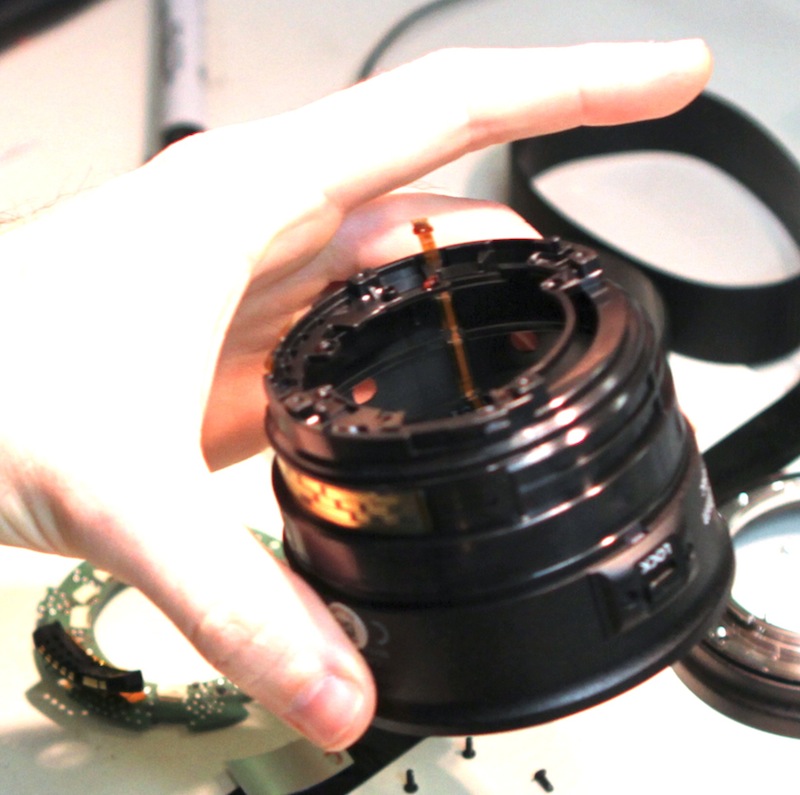 Leaving all of the optics and the USM motor in a separate piece. 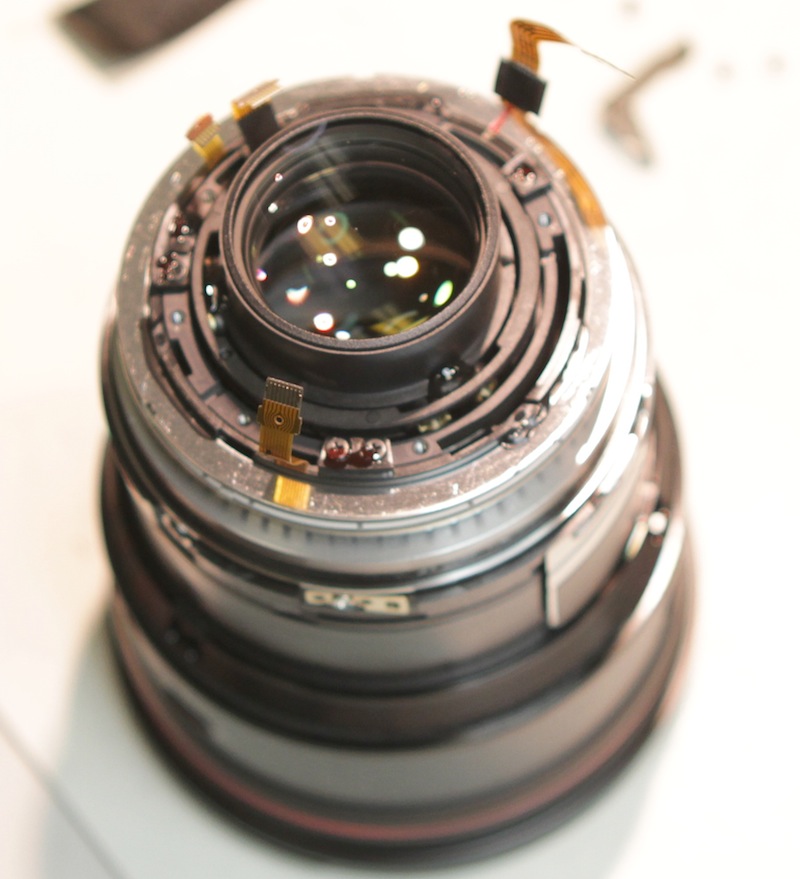 Another one of those really nice touches you’d never know about if you don’t take lenses apart. The distance scale isn’t just a piece of plastic glued to the inside of the barrel. It’s mounted to a metal piece that screws into place, and it’s much larger than it needs to be, which would help prevent light leaks through the distance window. 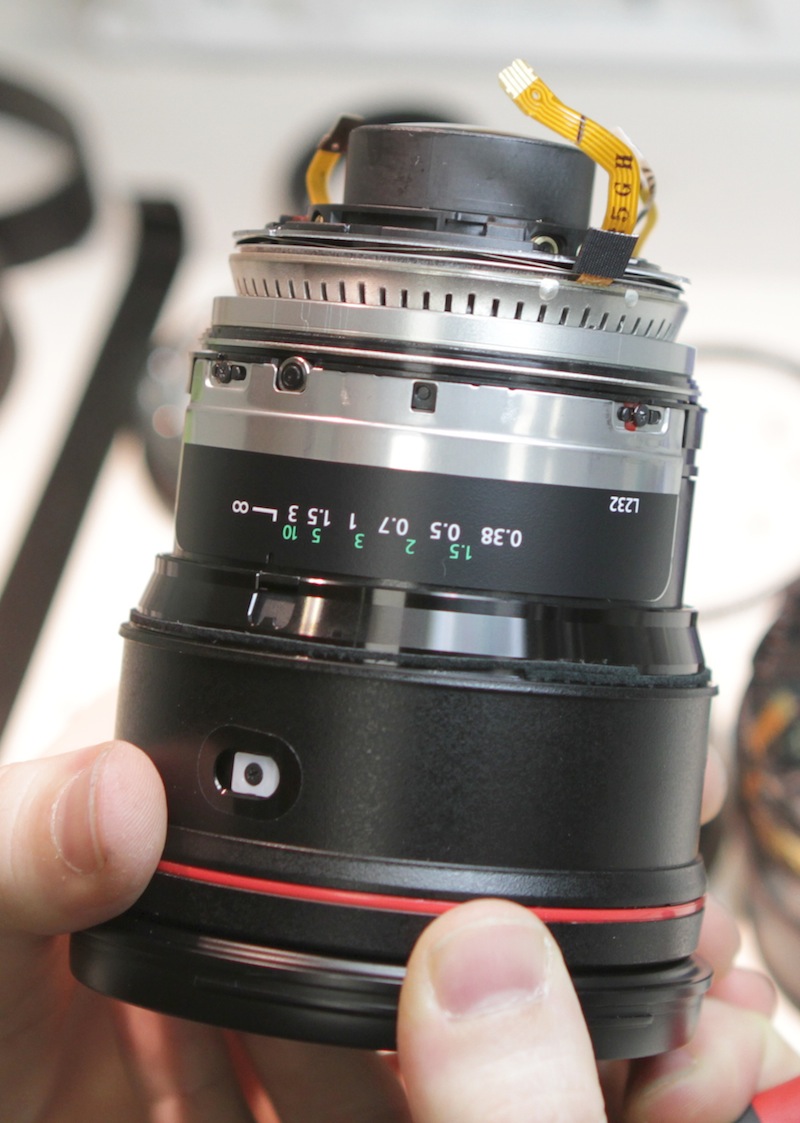 One more set of screws to remove (notice the screws are paired two images above – I’ve seen few lenses use two screws when one probably would be enough) and the USM assembly slips off in one piece again, leaving the entire optical assembly behind. The entire optical assembly (less the front group we took off first) is in Aaron’s left hand, the USM assembly and second barrel in one piece in his right hand. This is a very cool thing that I’ll discuss more in a minute. 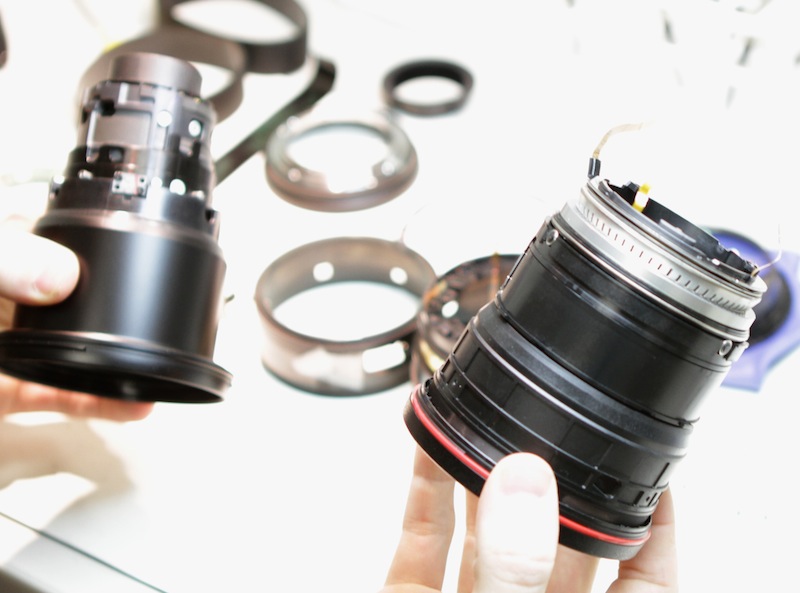 The modularity of this disassembly is nice, obviously, for someone who has to do lens repairs. But the part I really liked seeing is on the central optical core. If you look below you can see the sliding helicoids with screws and nylon collars that hold the lens elements in place. The collars seem larger, heavier, and just tougher than the ones in the older version. Those collars were one of the things we saw wearing out on older copies and causing problems. 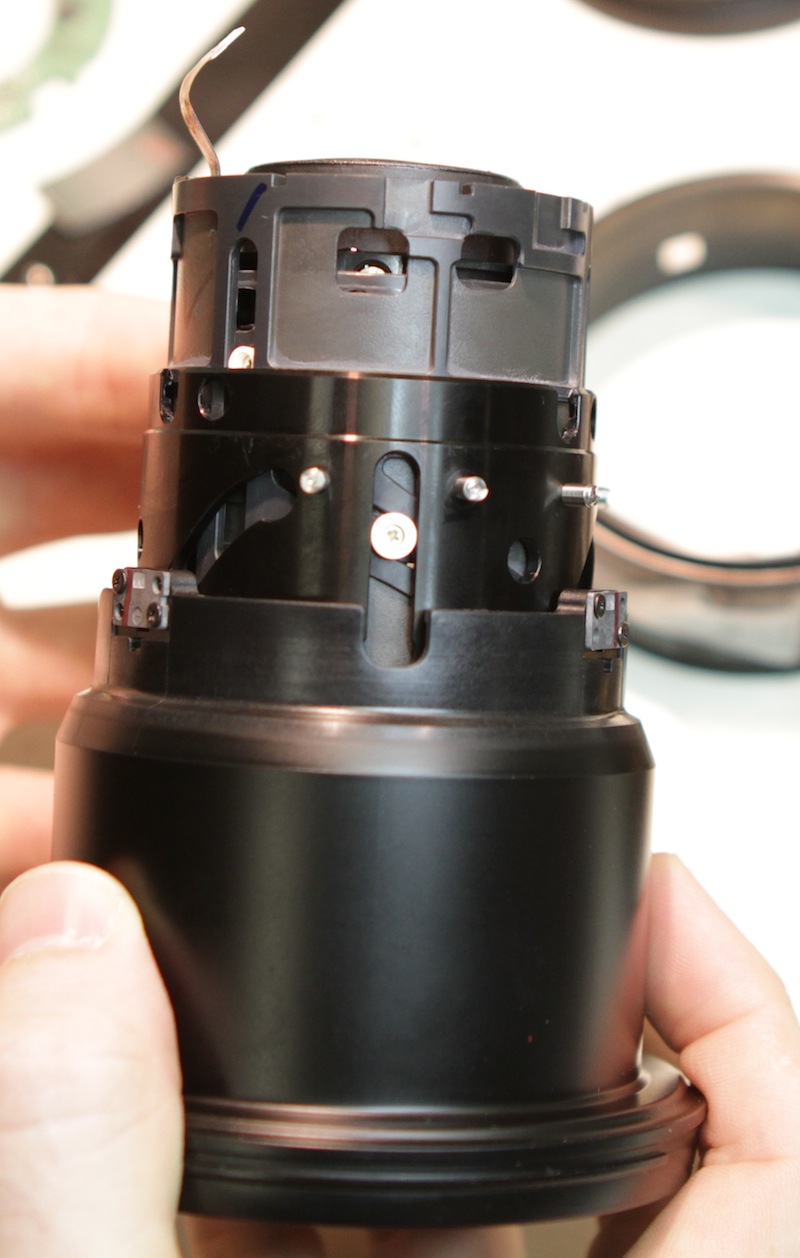 Also, do you notice the metal studs extending out from the middle barrel above? I hadn’t seen those on any lens like this before (sometimes you see a single one on a rotating ring). They keep the outer ring, with the USM motor, in proper place. But also they actually are stops that stop the barrel when the lens is fully retracted. In other lenses, the collars around the screws in the helicoids stop the lens motion. These metal stops should save a lot of wear and tear on the more delicate collars. Color me impressed. Again, this is just one of those nice touches that nobody will ever know about, but shows some design team was thinking, “How do we make this last a long time?”

Finally, I’ll give you a close-up that shows the adjustment mechanisms in this lens. You can see the two brass eccentric collars that adjust one of the rear elements for centering and tilt. They are far more protected than the front element adjustments on the old version. I can’t imagine a fall or jar knocking them out of place. Of course, the downside is whenever adjustment is needed, it’s going to require a lot of disassembly. But for almost everyone but us, that’s what factory service is for. 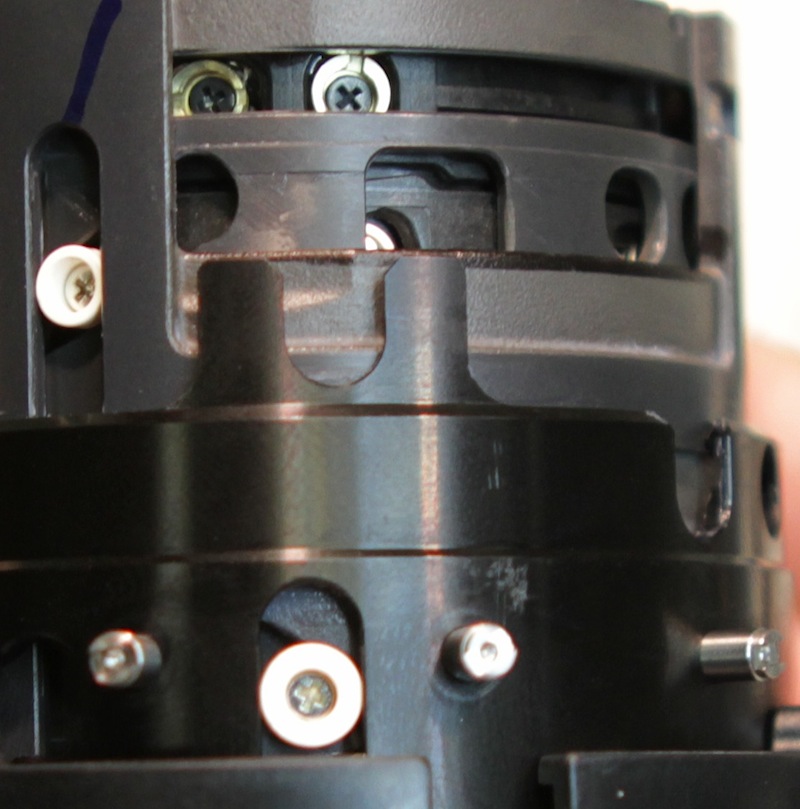 One last thing before we end. Look at that solid nylon ring around the screw above and compare it to a new and old ring from the old version below. The new ones certainly seem more robust. 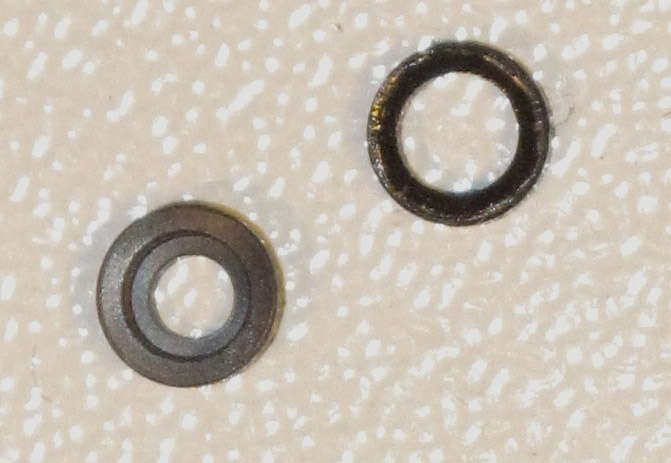 New and heavily used helicoid collar from version I lens

Nothing but time can really tell how well this lens is going to hold up. Nothing but reviews of lots of copies by lots of users is going to show us how copy-to-copy variation will be. But it’s apparent to me that Canon has taken the time to design the lens well and build it sturdily. I totally agree, that for the price, it should be well designed and well built. But experience has taught me that is not always the case for a more expensive lens. I’m glad it is the case here.

Would I get one? Of course – I’m a resolution freak, a gear-head, and I don’t have a 24-70. I’ve just examined the highest resolving zoom lens I’ve ever tested and found it’s also built and designed superbly. I can’t walk away from that combination.

But is it a practical lens for you? Well, if you’re a working pro or a very serious (and well-healed) amateur I’d have to say yes. It is so good that if there were a 40 megapixel camera in your future, you’d want this to put in front of it. Plus it looks like it will hold up over the years better than its predecessor.

But at this price it’s not for everyone. If you prefer wide aperture primes to f/2.8 zooms, don’t shoot standard range a lot, or simply are not rolling in cash, you’d have to consider the price. There are excellent alternatives for a lot less money. Enough less money that you could buy another lens with the difference.

Whether you want to spend the money or not is likely to be a moot point for a while. Finding these is pretty difficult at the moment.