Note: I’m going to bore people for a week or two while I decide on a new camera system for myself. To alert those who are going to be bored by posts about “Roger Buys a Camera System”; I’ll put that in the title for the rest of this series.

I don’t own an SLR – I go check one out for ‘testing’ when I need one. But I’ve moved out to the country and I want a camera at the house. I can’t really justify to management that I need to test a camera and some lenses for a year or two.

I know what I want: the Canon T4i‘s touch screen, the Canon 6D‘s Wi-Fi, and the Canon 5D Mk III‘s autofocus built around the Nikon D800E sensor, Nikon’s flash system, Pentax’s user interface (I’d take their sensor too, if I went crop frame), and be able to mount lenses from all manufacturers. But given a far-less-than-unlimited budget, I’ll be making some compromises, like everyone else. In order to make comparisons, I want to take a look at exactly how some systems differ.

Most of that doesn’t involve geek stuff like this, but geek stuff is what I know best so that’s where I’ll start. Resolution isn’t the end-all point for deciding on a camera system. It isn’t even the most important point in my decision about a camera system, and I’m a resolution nut. But it is a thing I want to know about.

One of the things I constantly harp on is that people should not compare Imatest or DxO results on two different cameras. You can’t look at the results of a lens on a crop sensor and a full-frame, for example. You can’t look at results of a lens test on a Canon 5D and make good predictions of how it will behave on a Canon 5D Mk III. We’ve even found lately that you can’t take the results on a Sony NEX-7 and extrapolate to a Sony NEX-6.

But there is one thing you can do fairly reasonably. You can compare two systems (camera and lens) to each other and determine the overall resolution of each system. I had some pretty self-centered reasons for doing just that. I, the ultimate camera system commitophobe, am going to have to buy, with my own money, a camera system. I hate when that happens.

One of the first compromise questions I had involves shooting with 24-70mm f/2.8 lenses; this is my most commonly used lens. The highest resolving 24-70mm f/2.8 lens is the Canon 24-70 f/2.8L II. The highest resolving camera is the Nikon D800E. Since I can’t mount the best lens to the best camera, I thought I’d look into how the two systems compare in final resolution.

I was fairly certain the D800E with a good Nikon lens is going to be better than the 5D Mk III with the great Canon lens. But I wasn’t sure by how much. The other nice thing about working at this focal length is we have a similar lens we can mount to either camera, the Tamron 24-70 f/2.8 VC, to get a little further comparison.

Let’s Look at Just the Lenses

Before we begin, I know there are some Fanboys somewhere who have stopped payment on their reality check and are stabbing pins in their Roger Effigy Doll because I said the Canon 24-70 II is the highest resolving f/2.8 lens. So let’s take the camera out of the equation and compare just the lenses on our Well’s Optical Bench. This means no camera mount, just evaluating the lens itself.

The following are MTF vs frequency plots for the center of the lenses in question – again, this is not Imatest data using camera images, this is purely assessment of the lenses (at infinity focus). The separation of the two graph lines shows the astigmatism of the lens. Almost all lenses have some; the Canon is truly unique in having so little. (These graphs courtesy of Aaron Closz who still gets nervous when I play with the optical bench. It’s nice and predictable, though. If I want him to run some tests all I have to do is sit down and say, “where’s that 70 micron reticle?” and here’s there like magic.) 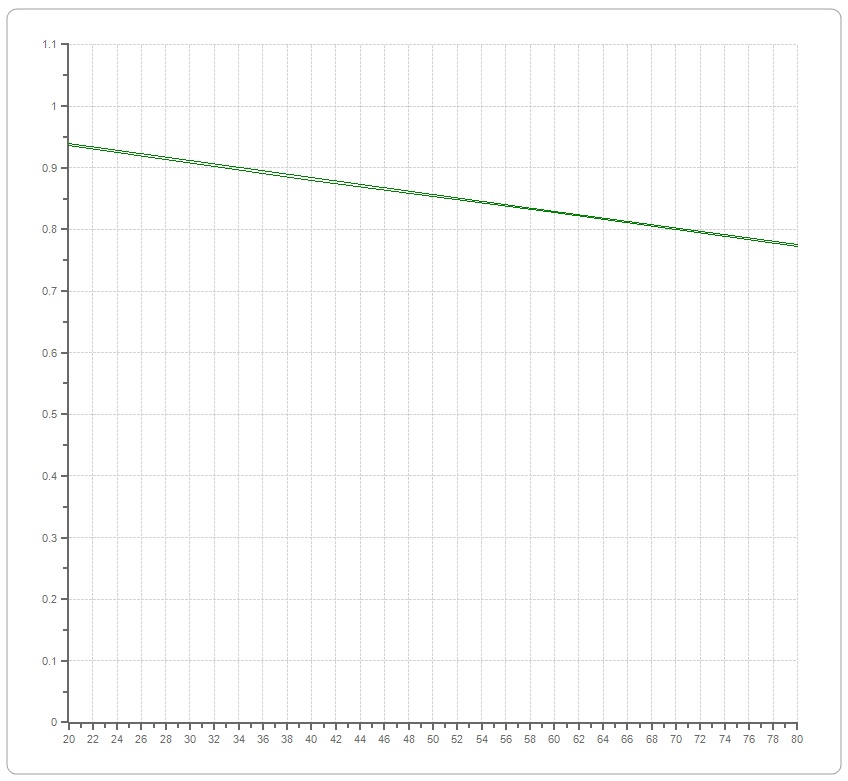 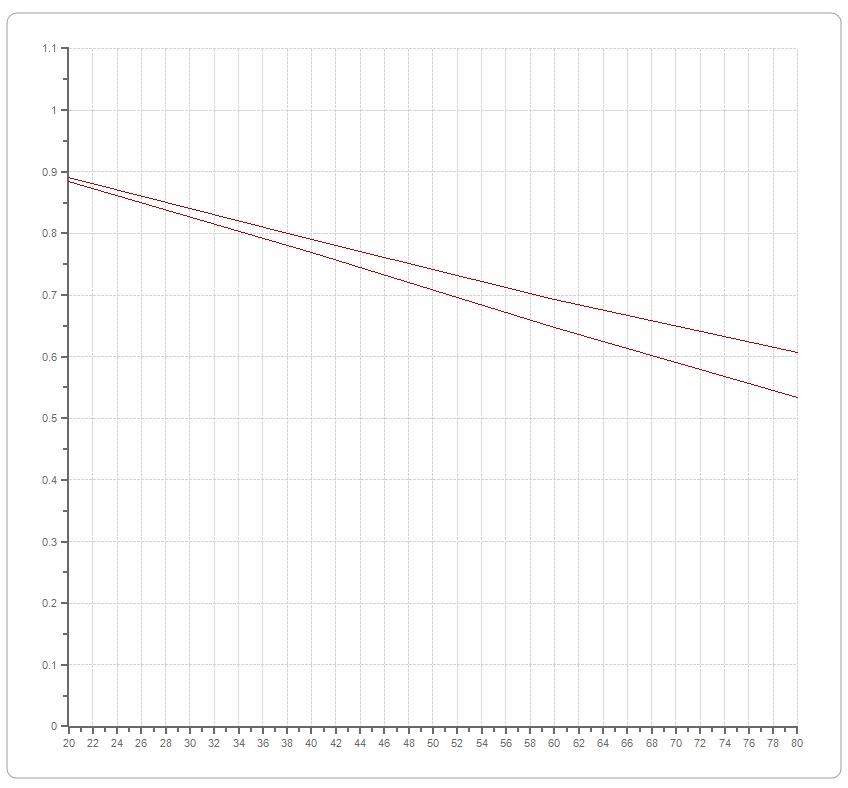 From direct comparisons we’ve known the Canon 24-70 II had a higher MTF 50 than the Tamron on Canon cameras, and that the Tamron was nearly as good as the Nikon on Nikon cameras. The optical bench shows a bit more differentiation between the Nikon and the Tamron than I expected, but otherwise clearly demonstrates what we already knew. I should mention we tested 2 copies of each, all of which had already been tested using Imatest and shown to be good copies.

Now let’s add the camera systems into the mix, something Imatest is perfectly set up to do. We’re going to measure Imatest MTF in line pairs / image height, as always. Since the D800E has 4912 pixels of image height compared to the Canon 5D III’s 3840 pixels the Nikon should resolve somewhere around 1.2 to 1.3 X the Canon’s resolution if the lenses were equal. (Several other factors, including that the Nikon does not have an AA filter, lenses aren’t perfect, and the math is more complex than a simple ratio, make this a very rough estimate.)

Let’s start by comparing the Tamron 24-70 f/2.8 VC on the two different cameras. We shot two copies on two bodies and averaged the results (which, btw, were nearly identical) to show MTF 50 in the center, averaged across the entire lens, and averaged in the 4 corners at f/2.8 and f/4.

These tests are all done at 50mm. I just didn’t have time to set up at multiple focal lengths and 50mm is a strong area for all 3 lenses. I wanted to compare them at their best.

The MTF50 difference between the two cameras shooting the same lens is quite apparent. The difference is a bit greater in the center and a bit smaller in the corners but it is quite significant – as we knew it would be.

The real bottom line here is that there are no losers. The resolution numbers all of these combinations show are nothing short of amazing. For example, all three zooms are equal to, or slightly better than, the superb Zeiss 50mm f/2 Makro Planar at equal apertures on the same camera.

I’ll show the f/2.8 data as our usual graph with center resolution on the horizontal axis, average on thevertical, all in line pairs / image height. I think this shows fairly well the actual resolution difference between the cameras (compare the two Tamron results) and the degree to which a better lens closes the gap. 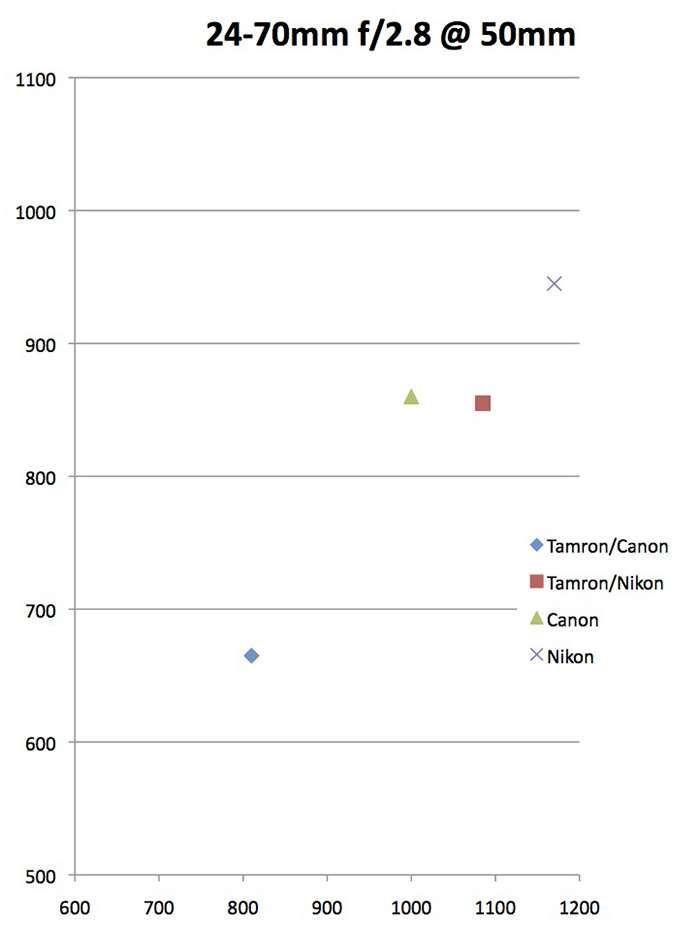 There’s one other aside that is probably worth mentioning; the test fairly well confirms common wisdom. If we run SQF numbers on these resolution differences, it suggests we’d need a print size of about 11 X 16 to detect this resolution difference. At that print size we should be able to tell the Tamron mounted to 5DIII (worst performer) from the Nikon 24-70 f/2.8 on D800E (best performer) pretty clearly. We might detect the difference between the Canon 24-70 Mk II on the 5DIII and the Nikon on the D800e. On a 16 X 20 print the Canon – Nikon difference would probably be clearly apparent.

So What Did I Learn Today?

Not too much. Like everyone else I already knew the D800E with a good lens was going to out-resolve the 5D III with a great lens, but that I’d need a reasonably large print to see the difference.

It also demonstrates another thing I mention a lot: the value of any third party lens varies according to what camera you shoot. The resolution difference between the Canon and Tamron 24-70 lenses is greater than that  between the Nikon and Tamron. Right now, the price difference reflects that: the Nikon costs $600 more than the Tamron, the Canon $900.

But if you want to look at it another way, the Tamron on a D800E is about the resolution equal of a Canon Mk II on a 5DIII — a bit sharper in the center, not quite as sharp in the corners, but pretty even. The Tamron-Nikon combination (for a guy like me looking at shelling out some major bucks soon) is $1,000 cheaper than the Canon-Canon system.

Of course, all of those prices are going to settle a bit differently in a couple of months. This is just where they are right now. And resolution is just one factor that goes in to choosing a piece of kit.

As to my ongoing search for which camera system I’m buying into, this just answers one tiny question. I’ve got a lot more research to do. I expect you’ll be reading more about that soon.