Well, I have to admit this has been a fun series. I’ve learned a whole lot. That’s what makes this so fun — I get some results I don’t understand, get some help figuring out what is going on, and before I know it, I’ve learned something that explains other things I haven’t been able to understand.

In the second part of this series, we started a database of sensor stack thickness and exit pupil distances, hoping that it would help people decide which lenses would adapt best to which cameras. (And, of course, determine which lenses would not adapt well to which cameras.) A number of people have added information to the database since it was first posted — enough to make it pretty useful.

Since the database is now large enough to be useful, I thought it would be a good idea to make a summary of what we know about lenses and sensor stacks. The best thing about all this, for me at least, is that it lets us make some generalizations about which lenses would be expected to have problems on which cameras.

To summarize, there are three main factors that determine if a given lens will have problems when used on a different camera than it was designed for:

As always, Brian Caldwell has been kind enough to furnish graphs of the theory, which really helps in visualizing things. 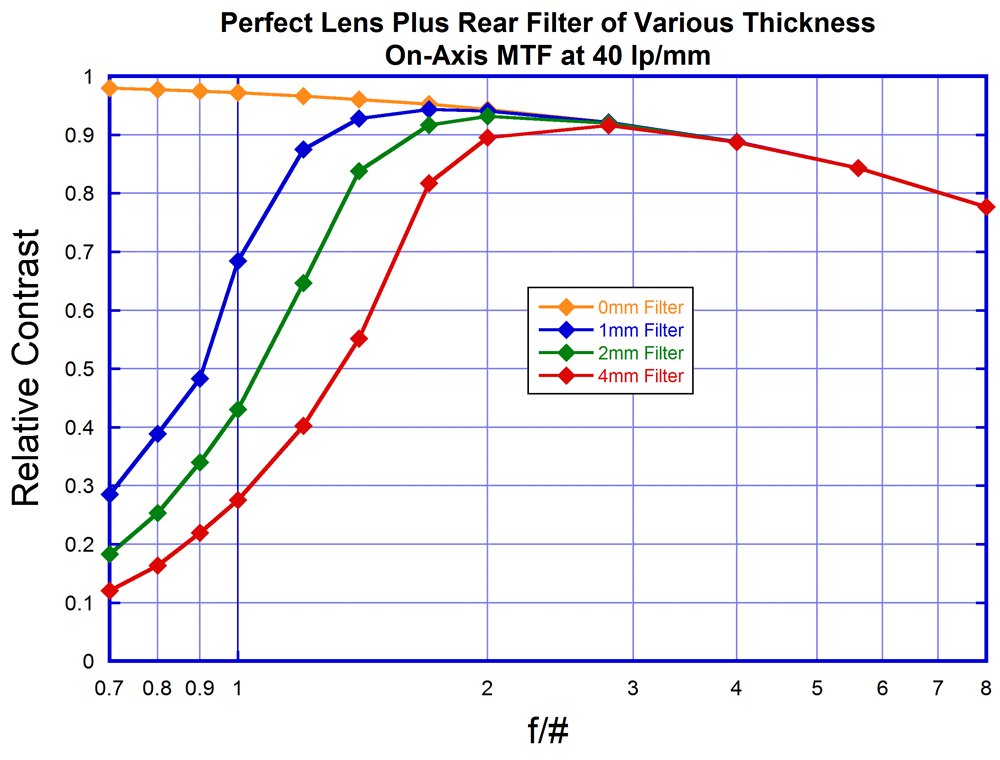 The graph demonstrates the on-axis (center) MTF of a theoretically perfect lens designed for no sensor stack filter (orange line), and the effects of adding a sensor stack equivalent to 1,2, and 4mm of glass. The first takeaway message is that for apertures of about f/2.8 and smaller (higher f number) there is really no significant effect on-axis.  (Emphasis on the ‘on-axis’ part. This doesn’t mean the corners will be great, although they may be.)

The second takeaway message is that the effect is proportional to the difference between the sensor stack thickness the lens was designed for and actual thickness of the camera it’s being used on. For example, adding 1mm of extra glass in the path doesn’t really affect things until f/1.4 or so, while a 4mm difference is quite apparent at f/1.8. Once the effect begins, though, MTF decreases exponentially with increasing aperture.

The summary, for on-axis effects, is that shooting a lens at f/1.4 on a camera with a sensor stack different by 2mm or more from what the lens was designed for will probably reduce MTF even in the center. Stopped down, though, you’re unlikely to see any difference on-axis. 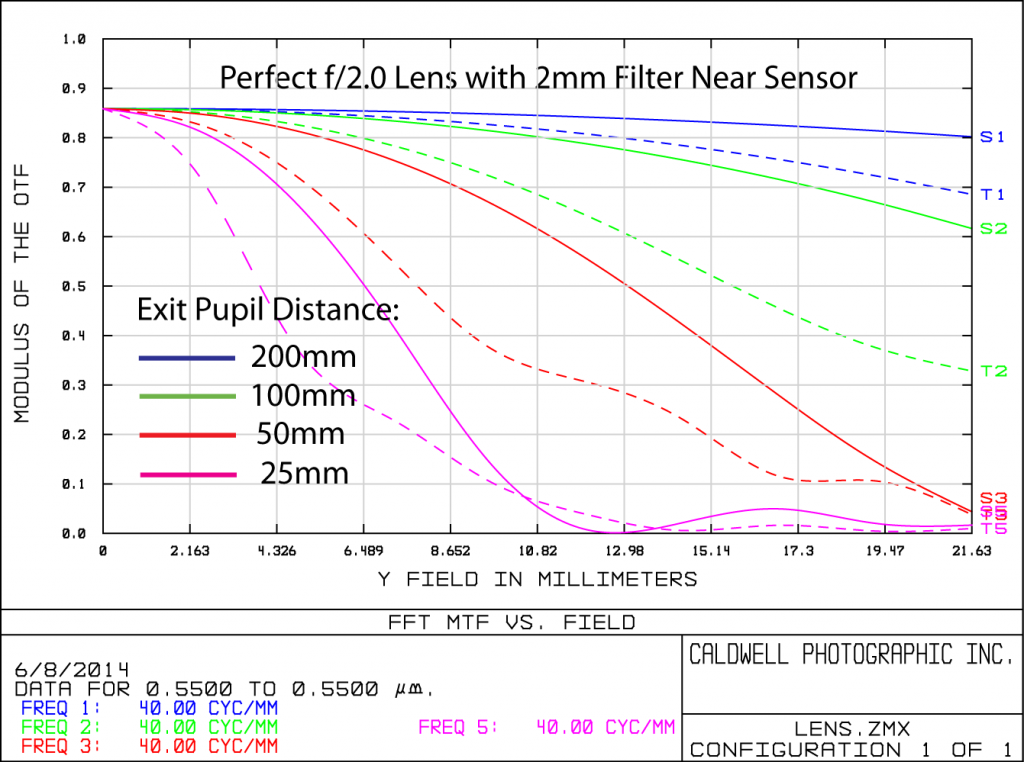 As you can see, the off-axis effect shows a mild decrease in MTF and increased astigmatism even with a 100mm exit pupil distance. Would you see this in real-world photography? You might, if you compared an image taken with the adapted system to an image taken with the lens native camera system. But overall, you’d probably be pretty happy with the lens adapted to a different camera.

Our database for sensor-stack thickness remains incomplete (although I’m hoping for more contributions soon). Also remember that physical measurement of thickness and optical thickness may be different. If the glass used has a high index of refraction, it would have an optical effect greater than what is measured physically. For example, we might measure a physical thickness of 2mm on two different cameras, but if one has low-refractile glass and the other high-refractile glass, the optical measurement made might be 2mm and 2.5mm.

The bottom line is all of the sensor stack thickness measurements we have are guesstimates, probably accurate to 0.5mm or perhaps 0.25mm. However, since a difference of 1mm should have only a minimal effect that’s probably accurate enough.

Our optical bench measurements with f/1.4 lenses seem to support this. When we measure lenses with a difference of 1mm of optical glass in the path we see almost no change on-axis and usually just a mild astigmatism change off-axis. A 2mm difference usually causes significant problems, though.

The summary regarding sensor stacks seems pretty clear. Leica cameras (with possible exception of the M240) have less than a 1mm stack. Most SLRs are around 2mm. Micro 4/3 cameras, with the exception of the Black Magic cameras, are about 4mm.

We should expect the following to give problems:

1. Using a lens designed for film on an SLR would give a 1.5 to 2.5mm stack difference, and we should notice a performance drop-off when using wide-aperture lenses with shorter exit pupil distances.

2. Using a lens designed for an SLR on a micro 4/3 camera would give a 2mm stack difference, and we may notice a performance drop-off on wide-aperture lenses with shorter exit pupil distances.

3. Using a lens designed for film on a micro 4/3 camera would give a 4mm difference, and if the other factors (exit pupil distance and wide aperture) are present we will almost certainly notice a performance drop-off.

On the other hand, using a Nikon lens on a Canon camera, or either of those on an NEX or Fuji camera shouldn’t give major problems since all of those sensor stacks are similar.

This should answer one question that several people have asked: Do third-party lens makers have to alter a lens optically when making a Canon versus a Nikon mount? I wouldn’t think so; the sensor stack thickness is very similar. It may (I’m just guessing) also answer an unasked question: Did Zeiss decide to make Tuitt lenses for Sony and Fuji, but not m4/3 because of the sensor stack difference? I don’t know the answer, but Sigma makes the same mirrorless lenses for both m4/3 and NEX. There may be compensating optics in those, but also none have wider aperture than f/2.8, which might minimize the optical difference.

The lens database has gotten fairly large, so I’ve changed it to be sortable, which should help you find what you’re looking for. A couple of lenses do stand out that, according to theory at least, should make bad adapter candidates (at least when shot wide open).

A number of other rangefinder lenses have exit pupil distances of less than 50mm, but particularly notable are the Voigtlander 35mm f/1.2 and 50mm f/1.5, both of which have wide apertures in addition to short exit pupil distances. Obviously, stopping these lenses down will help minimize the effects of sensor stack if you just have to shoot them on an m4/3s camera.

While I don’t have a mathematical formula to predict how well a given lens will work on a given camera, it should be apparent that wide-angle rangefinder lenses designed for film are going to struggle, especially on m4/3 cameras, but to some degree on other cameras. Longer focal length rangefinder lenses tend to have longer exit pupil distances and should do better. Stopping down to f/4 or f/8 should reduce the problem significantly, although it isn’t guaranteed to eliminate it near the edges of the frame.

Obviously, these are generalizations and suggestions. There are going to be exceptions. But, if nothing else, hopefully we can help a few people stop trying one adapter after another, hoping to make their 15mm rangefinder lens look great on the m4/3 camera.