Just The Lenses: Canon vs Nikon Zooms at 70mm

It’s impossible to accurately compare lenses from different mounts using any form of Computerized Target Analysis testing (methods like DxO or Imatest). Target analysis tests an entire system (camera and lens). People try to, of course, but it’s not accurate since you always have the added variables of camera sensor, microlenses, in-camera image processing, etc. Some people try to use adapters to test different lenses on the same camera, but then you have added variables from the adapter and sometimes from sensor stack thickness.

In general, it doesn’t really matter. If you shoot Nikon you aren’t really interested in Canon lenses, and vice-versa. Still, directly comparing the lenses without any camera involved is interesting to some people, I think. Some people are thinking of changing brands – they know the other brand’s camera has higher resolution, but aren’t sure if the other brand’s lenses are as good. More people than ever are shooting lenses across brands using adapters, and they’re sometimes curious, too.

It is, of course, possible that nobody but me is interested in direct cross-brand lens comparisons. But since I am interested and since I have to test all of the lenses in our inventory anyway, I thought I’d show some of that data. If others find it interesting, too, I’ll write up some more comparisons like this.

But hey, I usually find the opportunity to do a meaningless test hard to resist.

If you don’t speak MTF, don’t worry. It’s not hard. Higher on the vertical axis is better. Dotted and solid lines of the same color close together are better (far apart is astigmatism). The horizontal axis goes from the center of the lens at “0” to the edge of the lens at “20”. 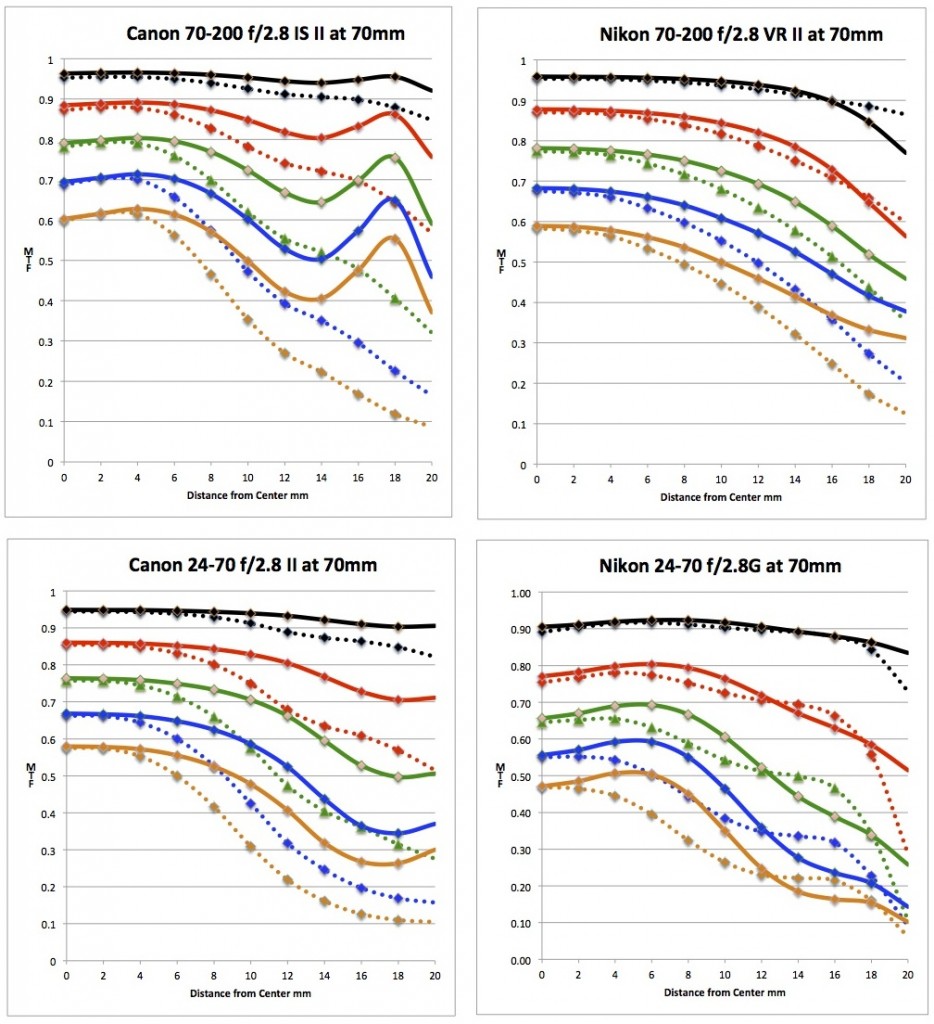 Painting with a broad brush, the MTF graphs show that one thing that most people assumed is accurate. At 70mm, the Nikon 24-70 f/2.8 G isn’t quite as good as the other three lenses. The Nikon 24-70 is a good lens, but the other 3 are absolutely awesome lenses.

There are a number of reasons for the difference. First, optical bench tests are done at infinity focusing distance, while the Imatest results were at about 15 feet. Second, Imatest shows only the MTF50 — a snapshot along the 0.5 line on the vertical axis of the MTF chart. Finally, Imatest results show a lot of averaging that the MTF graphs don’t do. I usually lump the readings for center, average of the entire lens, and average of the corners, for example. Additionally, Imatest doesn’t separate out astigmatism (the difference between sagittal and tangential lines). On the other hand, Imatest can look a bit further out into the corner than on the optical bench does.

Going into this test I expected the Nikon 70-200 f/2.8 VR II was as good in the center as the Canon lenses, which it is. I thought it would be a bit weaker off center, but it’s not that simple. If you look at just the sagittal numbers (solid lines) the Nikon has a steady fall-off, while the Canon gets softer, then sharper. So in the area from about halfway to 2/3 of the way to the edge of the image the Nikon is better, while the Canon gets better out on the edges. The Nikon also has less astigmatism.

We also ran field curvature tests on all the lenses. If you haven’t seen these graphs before, they’re a bit different than the MTF curves. (You can read more about them here.) Most people think of field curvature in kind of general terms, but tend to forget that the tangential and sagittal fields can have very different curvature and that the curves can be complex or simple. A perfectly flat field is actually rather rare. 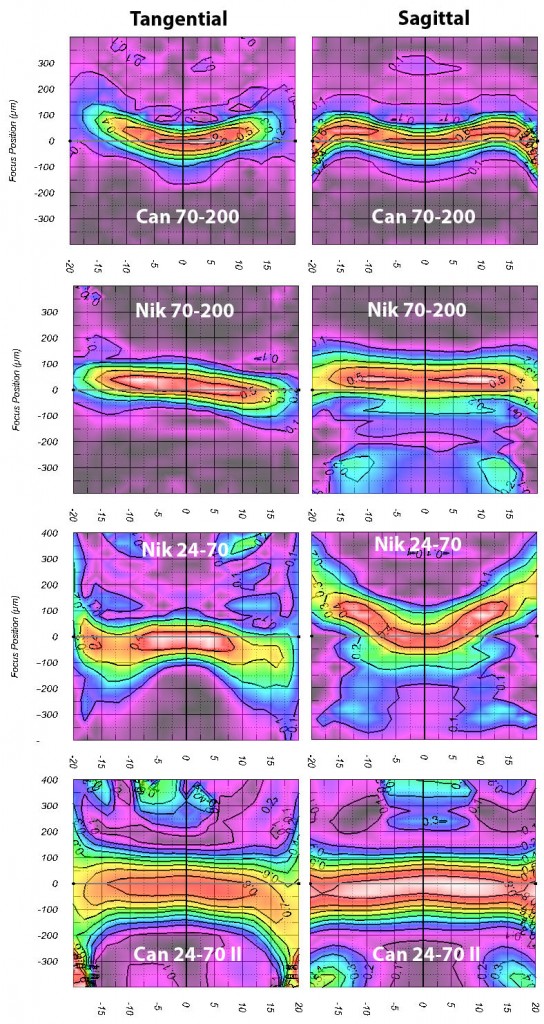 The field curvature graphs give us a lot of information about the lens that we can’t really get any other way. Basically these show what the area of sharpest focus across the lens looks like, assuming you had carefully focused on the center point.

Notice the Nikon 24-70 has some significant field curvature. It’s going to be very difficult to get the center and corners both in sharpest focus without stopping down quite a bit. The Canon 70-200 has a more complex ‘sombrero’ type sagittal curvature with a simpler tangential curvature. The Canon 24-70 Mk II and Nikon 70-200 VR II both have impressively flat fields of focus.

The sagittal field curvature on the Canon 70-200 f/2.8 IS II explains a bit about its MTF chart. If you look at the sagittal field curvature graph notice how the area of sharpest focus has curved away from the “0” line between 10mm and 15mm from the center, then curves back so it’s in sharp focus again at 18mm. Now go back and look at the sagittal MTF curves for the lens and you get some idea as to why it gets softer, then sharper, then softer again.

You might have noticed a bit of tilt in a couple of the field curvature examples. These are minor and would be impossible to detect in optical testing. Just to reassure you, below are the tangential and sagittal graphs for a Nikon 24-70 f/2.8 that was tilted enough to be obvious in an image (it is not one included in the testing).

Field curvature graphs for a decentered and tilted lens.

Life was nice and simple when we averaged some Imatest numbers and easily declared a lens ‘better’ or ‘sharper’ than another. We can still do that, of course. When there’s a big difference between lenses it’s just as apparent on the MTF bench as it was with Imatest. When we compare a couple of good lenses, though, the information is not so much ‘better and worse lens’, but rather  ‘stronger and weaker points’ of each lens.

These lenses provide a good example. When I just provided MTF numbers, I found the Canon 24-70 f/2.8 a bit better than the Canon 70-200 f/2.8 IS II at 70mm. Very close, but a bit better. Comparing them here my original thought was things might be different at infinity focus compared to the closer focus used for Imatest. But the additional information we get with bench testing shows us more than just better or worse. The 70-200 is a bit sharper in the center while the 24-70 has a much flatter field.

If you look at the MTF chart there’s not much question the Canon 24-70 has a higher MTF than the Nikon 24-70 in most locations and at most frequencies. However, the Nikon has less astigmatism in the outer areas, and that may give it a ‘look’ that some prefer over the absolute resolution of the Canon.

Before doing this test, if you had asked me I would have told you I thought the Canon 70-200 was just a bit sharper than the Nikon. It might be, by just a tiny bit in the center. Away from center, though, the Nikon 70-200 is better at higher frequencies. The Nikon 70-200 also has less astigmatism in the outer edges and a flatter field than the Canon.

The field curvature in the edges of the 70-200 f/2.8 IS II at 70mm would make some people (including me) prefer the very flat field of the Canon 24-70 f/2.8 Mk II, at least at 70mm. It depends what you use the lens for. For portraiture or action sports, it would be completely meaningless but I do some architectural shooting at 70mm.

Saying one of these three lenses is clearly better than the other at 70mm is rather silly. They have some different characteristics; some slightly different strengths and weaknesses. The reality is if I shot Nikon and carried these two zooms, I’d use the 70-200 for work around 70mm. If I shot Canon and carried these two, I’d prefer the flat field of the 24-70 once in a while, need the IS of the 70-200 once in a while, but generally wouldn’t worry about changing lenses to get a 70mm shot.

Still, I find the comparisons interesting, even if not very useful, and we’ll be doing some more.  And who knows — someday when I’m shooting my interchangeable mount 50mpix SLR I might actually be making a decision as to whether I want the Zeiss, Canon, or Nikon lens for it in a given focal length.