Our Just the Lenses posts are optical tests where we compare various lenses on the optical bench. Unlike DxO or Imatest test results, no cameras are involved, eliminating one of the major variables. It’s particularly useful when we’re looking at third-party lenses that can be used on various cameras. It’s hard to extrapolate the results of a test made using a third-party lens on a Canon 5D Mk III when you are trying to determine how it might compare to one shot on a Nikon D800, for example. Testing on the optical bench gives a direct comparison between lenses without any other variables.

We’ve been quite interested in the new Tamron 15-30mm f/2.8 Vi DC USD, and since we already had optical bench results for two very similar brand name lenses (the Canon 16-35mm f/2.8 L Mk II and the Nikon 14-24mm f/2.8 AF-S) we thought it would make a good candidate for a Just the Lenses test. 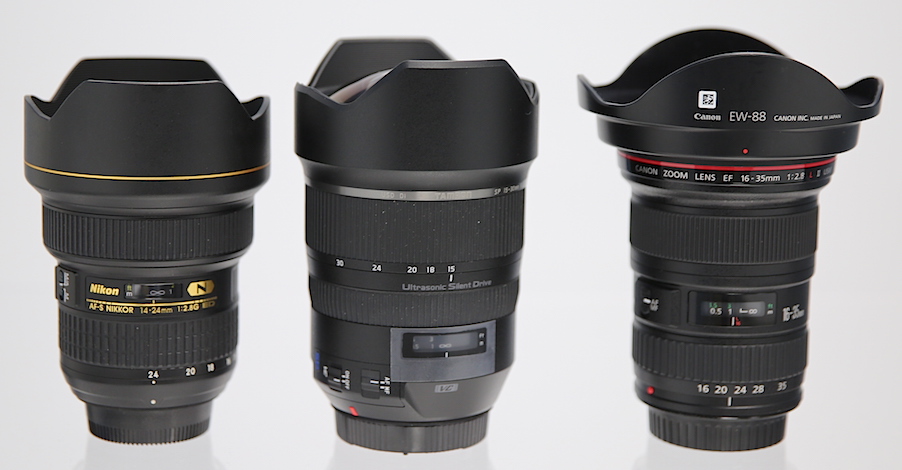 The Tamron 15-30mm f/2.8 feels heavy and solidly built. Like the Nikon, its hood is built-in, which has advantages and disadvantages. Since it’s always on, it’s always providing protection, and it’s built more solidly than a simple hood. But if you lose the lens cap you can’t just buy a temporary replacement at the local camera store; you have to buy the special cap that fits over the hood. Not to mention if you break one of the petals it requires a trip back to factory service to be replaced.

Like the lens itself, the focus and zoom rings feel very solid. There’s no loose sloppiness in this lens, unlike some other third-party wide angles. But some may find the resistance a bit higher than they’re used to; there certainly is more resistance when zooming or focusing than with either the Nikon or Canon wide-angle zooms. Some will like it better. Some won’t.

Other factoids about the three lenses are listed below.

In size and weight, the Tamron is much closer to the Nikon than the smaller Canon lens. Like the Nikon, it can’t take screw-in filters. It’s significantly less expensive than either of the brand-name lenses, although I wouldn’t call it bargain priced. My opinion going into the test, therefore, was the Tamron would have to provide optical performance at least as good as the Canon lens (considered the weaker of the two manufacturer’s wide zooms) to be competitive.

All lenses were tested on a Trioptics Imagemaster Vertical MTF Station. Five copies of each lens were tested and the results averaged unless noted otherwise. Each copy was tested in four rotations with 0 degrees being standard camera orientation, the cut being made from the left edge to the right edge of the field of view. The additional cuts were made after 45, 90, and 135 degrees of rotation on the bench. 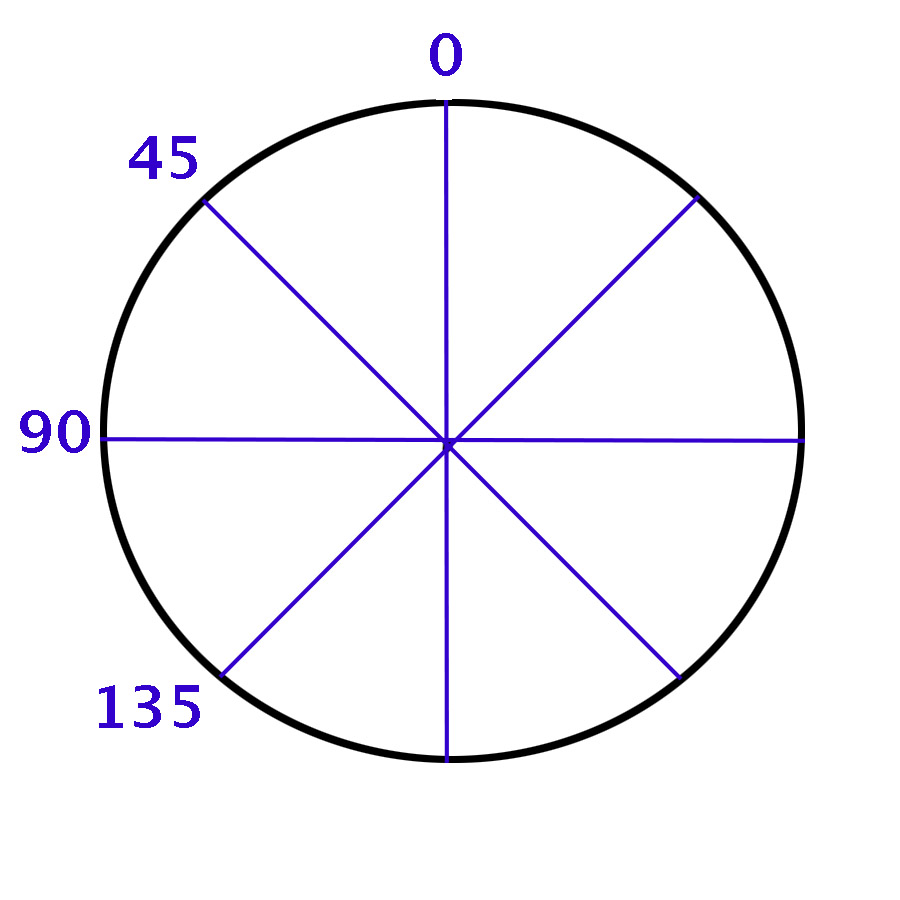 Testing each copy at 4 rotation angles gives us an excellent way to tell how even each side and corner is.

Results at the Wide End

The graphs below represent the average of 20 MTF readings for each lens (5 copies of each lens, with 4 MTF readings each) at the widest end of the zoom range, comparing the Tamron to the Nikon and Canon zooms. Note that the readings are actually at slightly different focal lengths: 14mm for the Nikon, 15mm for the Tamron, and 16mm for the Canon.

If you don’t speak MTF, don’t worry. It’s not hard. Higher on the vertical axis is better. Dotted and solid lines of the same color close together are better (far apart is astigmatism). The horizontal axis goes from the center of the lens at “0” to the edges of the lens at “-20” and “+20”. Lower lp/mm (black and red lines) have association with strong contrast, while higher lp/mm are associated with ability to resolve fine detail. 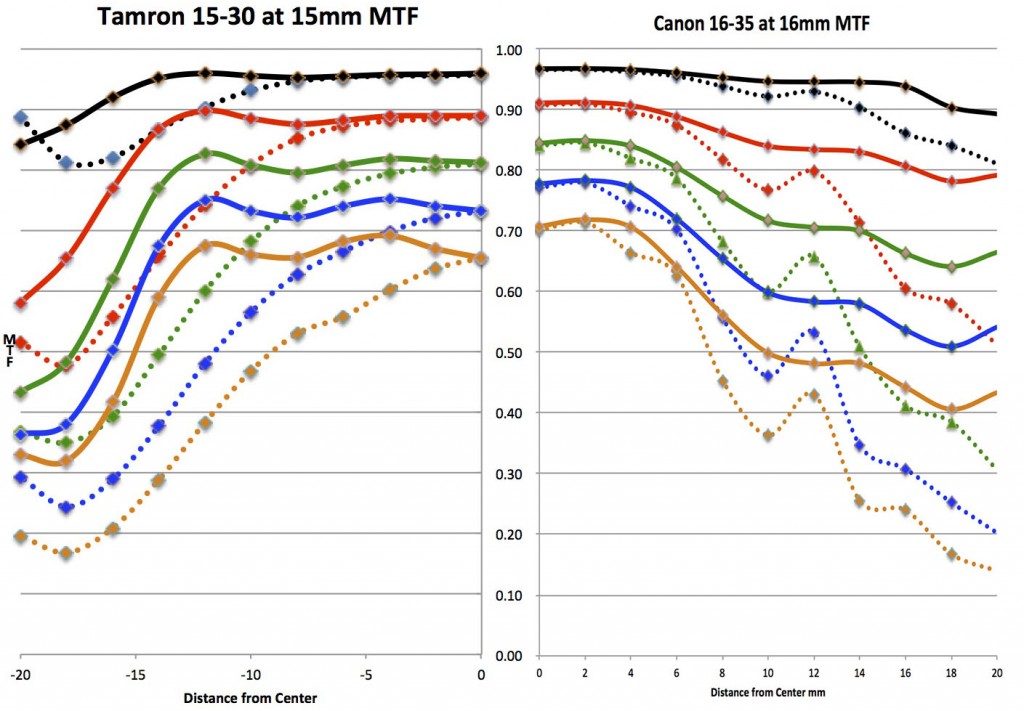 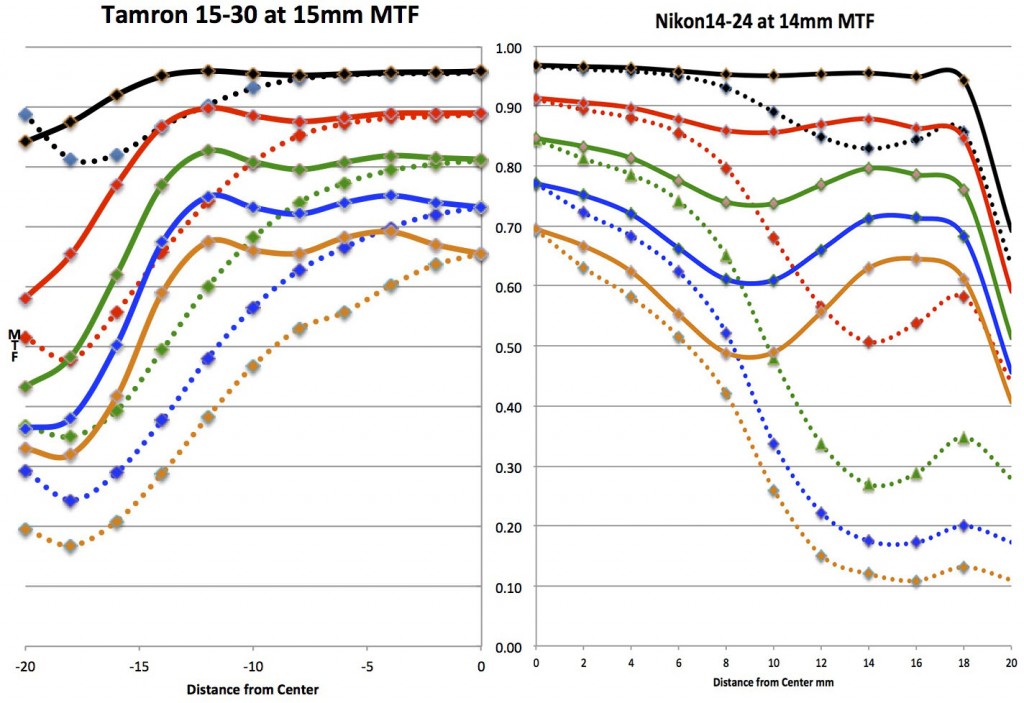 Compared to the Nikon 14-24 f/2.8 AF-S, the Tamron is just a tiny bit behind in center resolution, and about equal or a little better in the central 1/3 of the image. The Nikon is much better in the edges and corners in the sagittal plane, which it’s famous for, and roughly the same in the tangential plane. Technically, the Nikon has more astigmatism in the corners, but that’s because of the increased sagittal resolution, the tangential resolution is about equal in the two lenses.

Overall at the wide end the Tamron does well. It’s perhaps not quite as good as the two manufacturer’s zooms, but very close.

Results at the Long End

There’s a greater difference in focal length here, with the Nikon at 24mm, the Tamron at 30mm, and the Canon at 35mm. So some might say we’re comparing apples and oranges. On the other hand, the extreme ends of the focal range are what we like to test since it’s where any weaknesses usually show up. 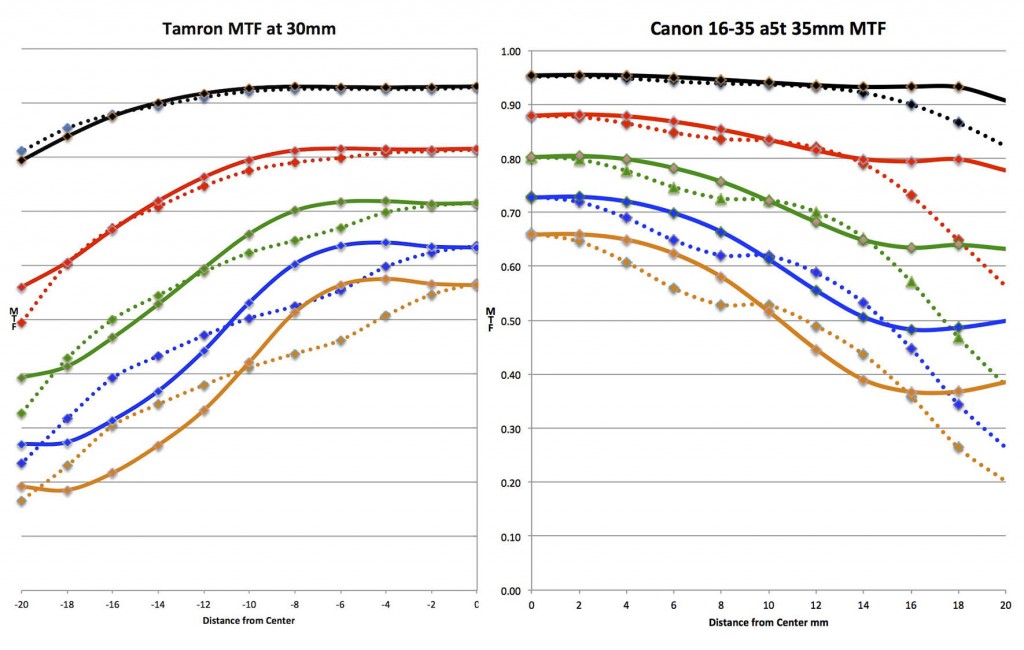 At the long end, it’s apparent that the Canon is just a bit better than the Tamron both in the center and off-axis. 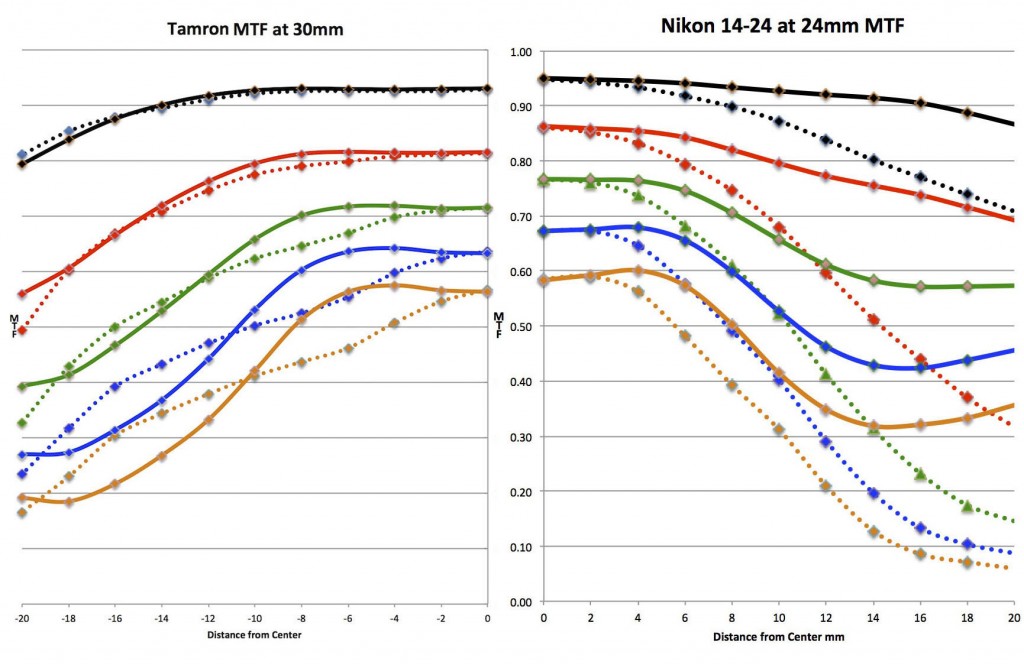 Again, the comparison shows that the Tamron just isn’t quite as good as the Nikon at the long end.

Let’s remember, though, that the long end of the three lenses is quite different. For that reason I thought it worth comparing them all at about the same focal length, so we ran another set at 23mm to give a direct comparison at that focal length. This might give a slight disadvantage to the Nikon, since this is near its extreme focal range. On the other hand, the Nikon lens designers got a slight advantage because they didn’t design the lens to zoom as far as the others. So I’ll call it all even.

And I’m glad we did check, because the information is worthwhile, demonstrating a different philosophy of lens design. 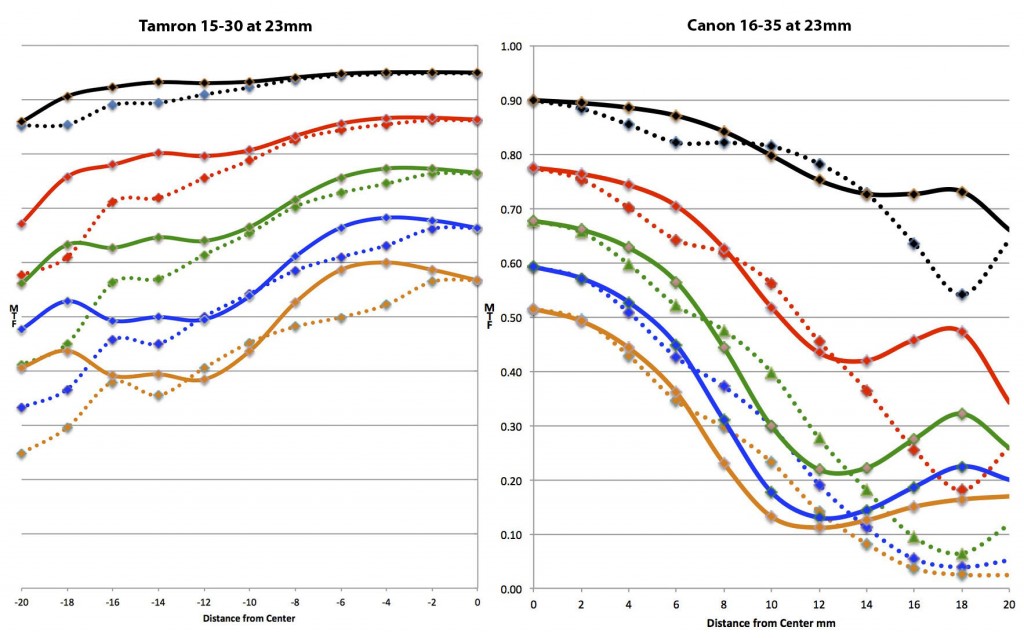 The Tamron is at its best here in the middle of the zoom range, with a better MTF curve than at either extreme. The Canon, on the other hand, appears to be at its weakest here; not as good as it is at either extreme and not as good as the Tamron at 23mm. (Remember, this is the average of 20 MTF readings from 5 copies, and there were no bad copies.) 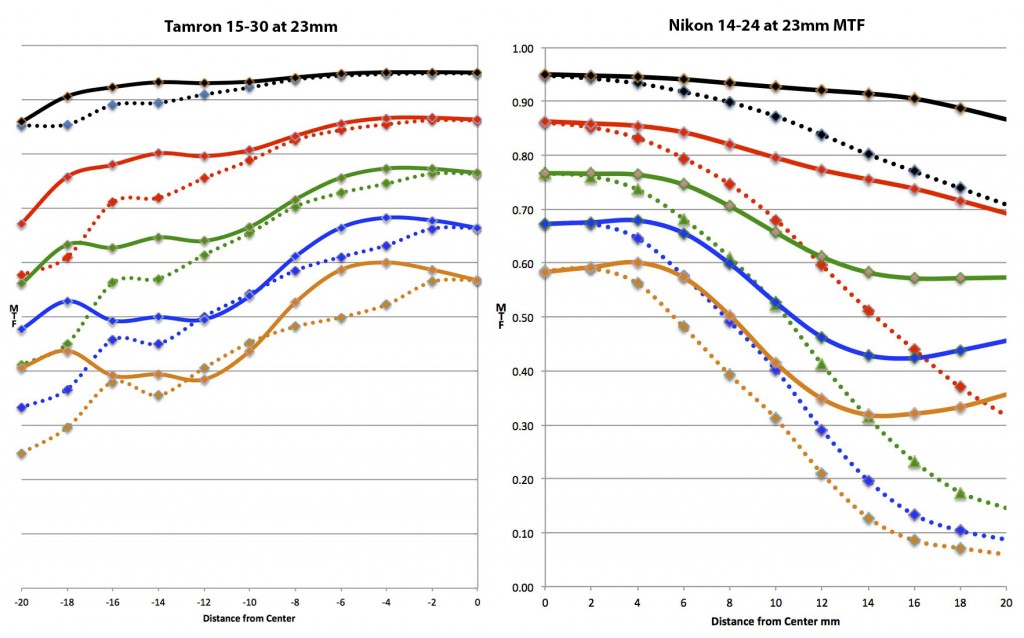 Compared to the Nikon, the Tamron is holding its own when shot at 23mm with an MTF curve that’s as good as the Nikon’s, and perhaps a bit better since it has less astigmatism. That’s pretty remarkable.

Field curvatures give us a lot of nice information, explaining sometimes why corners are softer (because they are not in the plane of focus of the center of the lens used for the MTF graphs), and demonstrating visually the lens’ astigmatism. I’m just showing the curves for all three lenses at 23mm. The curves are similar in shape and direction at both ends of the zoom. In the case of the Canon lens, though, they are much less severe at areas other than the mid-point of the zoom. 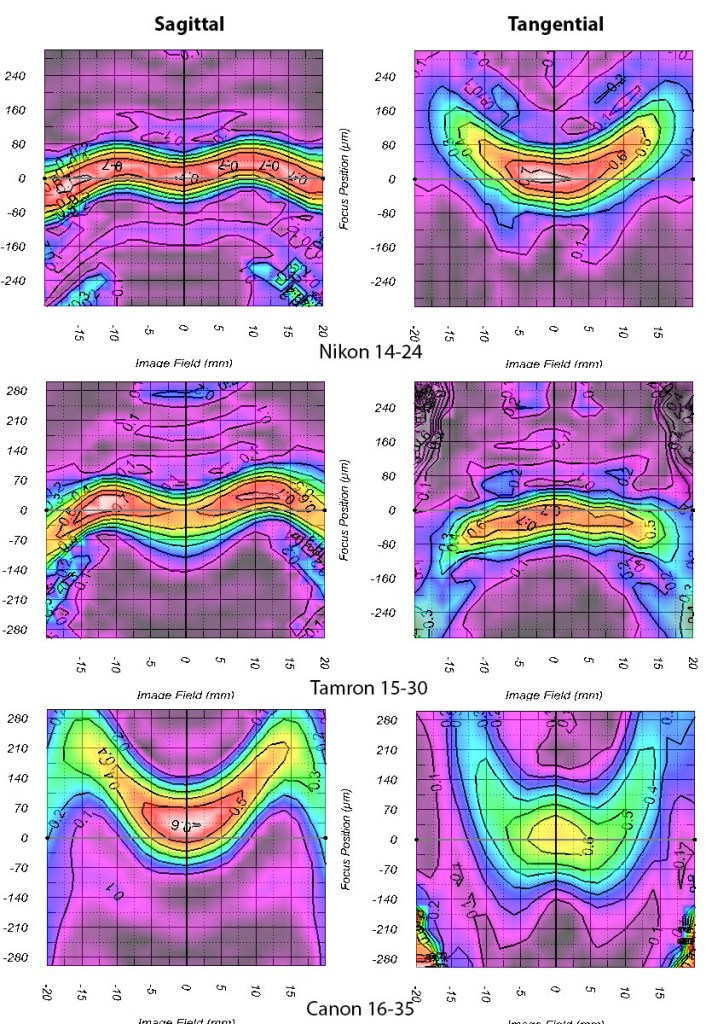 Looking at the graphs above (all done at 24mm) we can see, for example, part of the reason for Nikon’s superb corner and edge performance in the sagittal plane. The field curvature has a little “mustache” shape, but really stays in the same plane of focus as the center all the way out to the edges. The tangential field has a pretty wicked “U” curve, which also explains some of the astigmatism we see on the Nikon graphs.

The Tamron’s field curvature at this focal length is much like the Nikon’s in the sagittal plane, and has much less curve in the tangential plane. Again, this shows the ‘sweet spot’ of the Tamron lens. At the wider end there is more astigmatism and at the longer end some loss of resolution.

The Canon’s field curvature is more severe than the others although the sagittal and tangential curves are similar in shape through most of the field. (Please forgive the broader “depth of field setting” on the Canon curves. I accidentally moved a slider when generating these and they take so long to do that I decided to go with it as it was rather than redoing it. Tying up a $200,000 machine for an hour when we need it for other things isn’t always possible.)

Like so many tests, this one just emphasizes the fact that different lenses are different.

At the wide end of the zoom range, the optical differences are complex. In the middle 2/3 of the field the Tamron holds its own or is a bit better, but it’s not quite as good in the corners. At the long end (30-35mm) the Canon lens is better than the Tamron. At 23mm, though, the Tamron is as good as the legendary Nikon 14-24, and clearly better than the Canon 16-35. And, of course, the Tamron comes at a significantly lower price than either of the manufacturer’s lenses.

So which one do you want? As is usually the case, it’s an individual decision. If you have a good 24-70 zoom already and plan on using this lens from the wide end to 24mm, then the Tamron is right up there with the other two at 24mm and just a bit behind at the wide end. For Canon shooters who want to their wide zoom at focal lengths longer than 24mm, the Canon is better and goes further.  The Nikon doesn’t go longer than 24mm, so the Tamron gives some extra reach to Nikon shooters, although at slightly lower resolution.

Choices are nice, aren’t they? But deciding can be complicated.