Sometimes I put up posts basically because I find myself answering the same email over-and-over. One of the emails I get a lot is: “I want the best copy of the xxxx zoom lens.”

Generally, people miss my sarcasm and just respond that they want the best overall lens. I could probably satisfy that request for a prime lens (it would be splitting hair, but it could be done). But there’s no way to do it with a zoom; there are just too many variables, and the variables interrelate and counteract each other in complex ways.

So today I thought I’d just put up some pictures and demonstrate how one single variable, field tilt, changes on a given lens at different zoom distances. We chose Canon 70-200 f/2.8 IS II lenses because they are excellent. So you fanboys that want to take this out of context and say Canon 70-200 f/2.8 IS II lenses have tilt variation, trust me, it’s less than the zoom you are a fan off. Every zoom lens made is like this.

All of these lenses had been tested just prior to running these field curvatures both with test-chart photographs and on our MTF optical bench. All of them were optically at least average, if not slightly better than average by my standards, which are quite a bit higher than what the factory standards are (we reject about 5% of lenses that factory service tells us are fine).

The first lens I’ll show you was the weakest of the 12 we tested (although I’ll mention again, it was still an “average” copy). It looked fine on all of our usual optical tests, but on the optical bench the MTF chart had some detectible astigmatism at 200mm. The field curvatures at 70mm, 120mm, and 200mm zoom lengths show why. There’s a bit of field tilt at the wider focal lengths (about normal for most zooms) but at 200mm the tilt becomes more dramatic and the tangential field is much more tilted than the sagittal field. 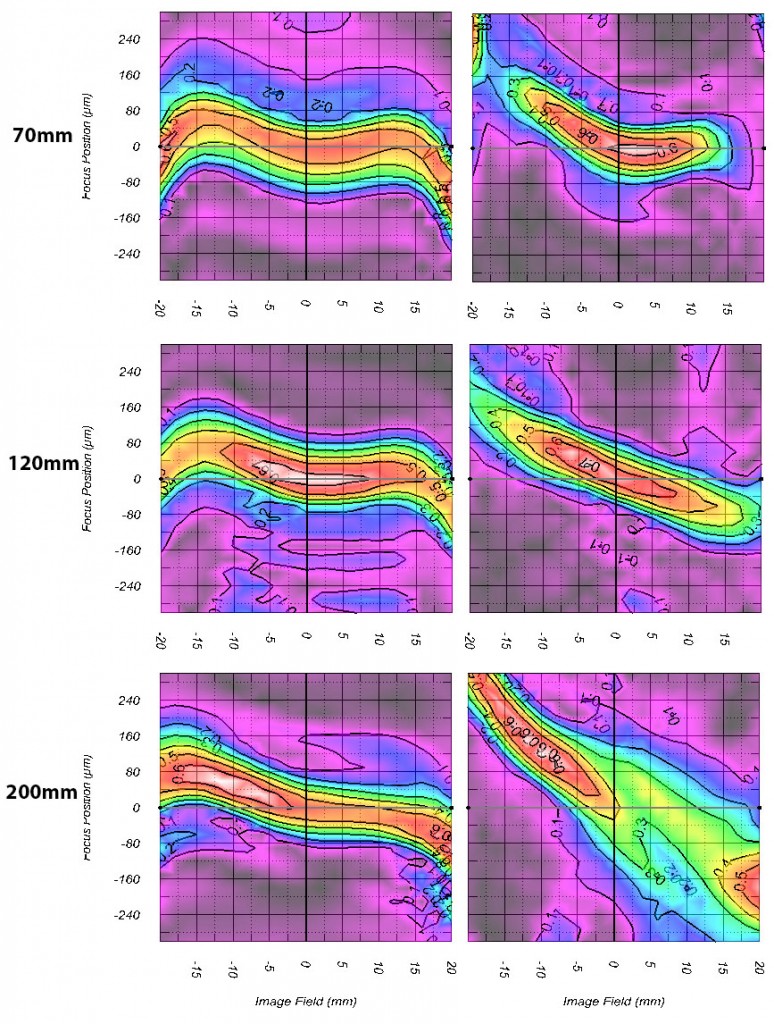 If you prefer numbers, our bench calculates out the actual tilt in degrees, and the table below shows the tilt numerically.

Could you have detected this at home? Probably if you were really into pixel peeping, did careful alignment, and were fairly experienced you might have detected it. Could you have seen it in a photograph? If you compared edges at 200mm with a subject that would reveal astigmatism, you might see it. Probably not, but maybe.

Here’s a second example; this lens optically looked fine also and passed our usual optical tests. On the MTF bench it had a bit of astigmatism at 200, but not nearly as much as the first example. 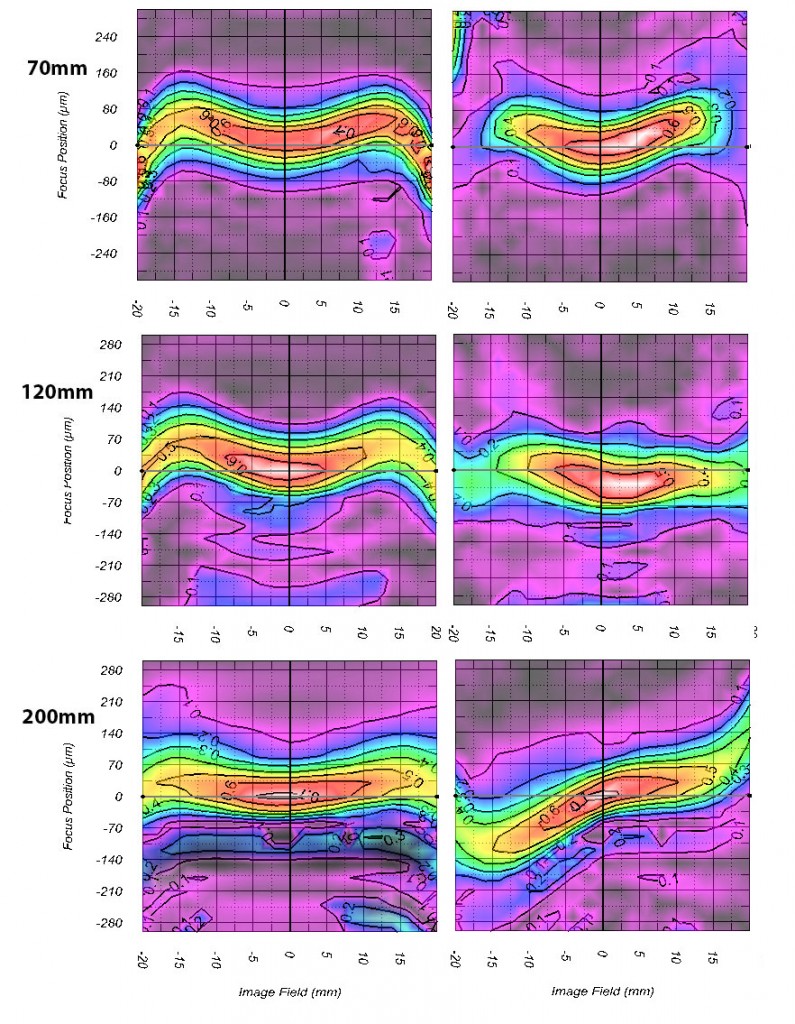 Looking at the tilt numbers in numerical form instead of pictures is probably clearer.

Could you have detected this one as a problem at home? No, I’m almost certain you could not unless you have an Imatest setup, perhaps.

A third example, just for anyone who is starting to think that this is something that just happens at the long end of the zoom. 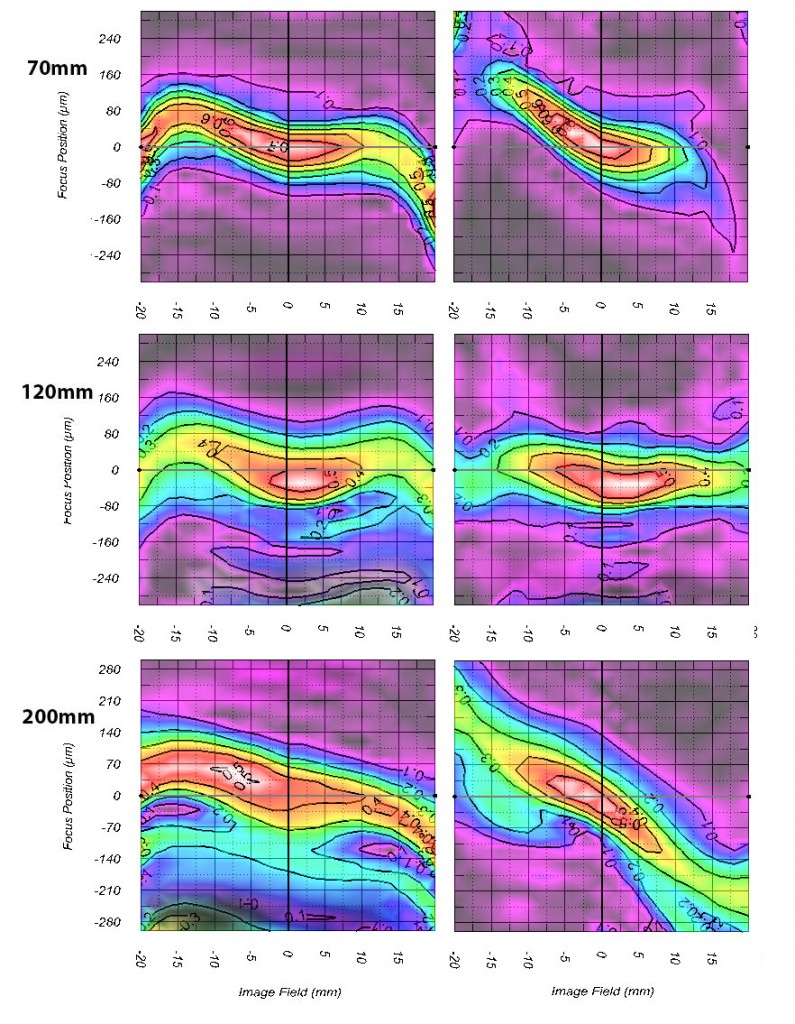 I won’t bother making a numerical table this time; I think you’re probably getting the idea. This lens is perfectly flat in the center of the zoom range, with just a slight bit of tilt at either end.

What Does It Mean?

All I’ve done is show you one variable (field tilt) in a number of optically well-adjusted lenses.

We ran 13 copies of the lens through field curvature tests at these three focal lengths. Two of them had flat fields at all three test lengths, and two more were nearly so. But neither of those two had the best MTF, they didn’t resolve as well as most of the tilted lenses I just showed you, although, again, they were acceptable. If we had tested some other things – rotational variation, lateral chromatic aberration, MTF at various focal lengths, etc. every lens would have been slightly different from every other one in those measurements, too.

Of the 13 lenses, only the first example I’ve shown above could possibly have been detected outside of the lab, and even that would have taken some intensive home testing to find.

So, if I’ve done this properly, you should now be thinking, “If we can’t see it in a photograph, then it doesn’t matter, does it?” Which is the point. Asking for the sharpest copy, best copy, whatever, is pretty much a fool’s errand unless you have something specific you want. For example, I could give you the copy with the highest center MTF curves at 200mm. That would be easy (although probably useless). But I sure can’t give you the best zoom lens because they are all best at something and worst at something else — and in a photograph you can’t see the difference 99% of the time anyway.

So why don’t we make them perfect? Because we can’t. Optically adjusting a lens to improve center resolution at the long end may affect field curvature at the short end. Then fixing the field curvature at the short end might affect focus accuracy in the center. When you adjust these things for a living, you quickly learn to make compromises so that everything is acceptable. It can be complicated and it can take hours. And when you are finished, some things are still a bit better than others.

In our repair department, we call it Roger’s First Rule: Better is the Enemy of Good Enough. I can’t tell you the number of times we’ve spent four hours getting a lens optically acceptable, and then decided we’d make one more little tweak to make this thing just a bit better. After that tweak, everything else is totally awful and it takes another two hours to get back to where we were in the first place.

It’s different with prime lenses. There are far fewer elements, and especially far fewer moving elements, which makes for fewer variables. But finding the “best copy” of a zoom is basically a meaningless task; unless you know exactly what focal length and which features you want it to be best at.

(I know that 6,314 of you are about to suggest another lens for me to repeat this test on. Let me point out that this took nearly two full days, tying up a $200,000 machine for a non-profit blog post. It isn’t likely to happen again anytime soon.)