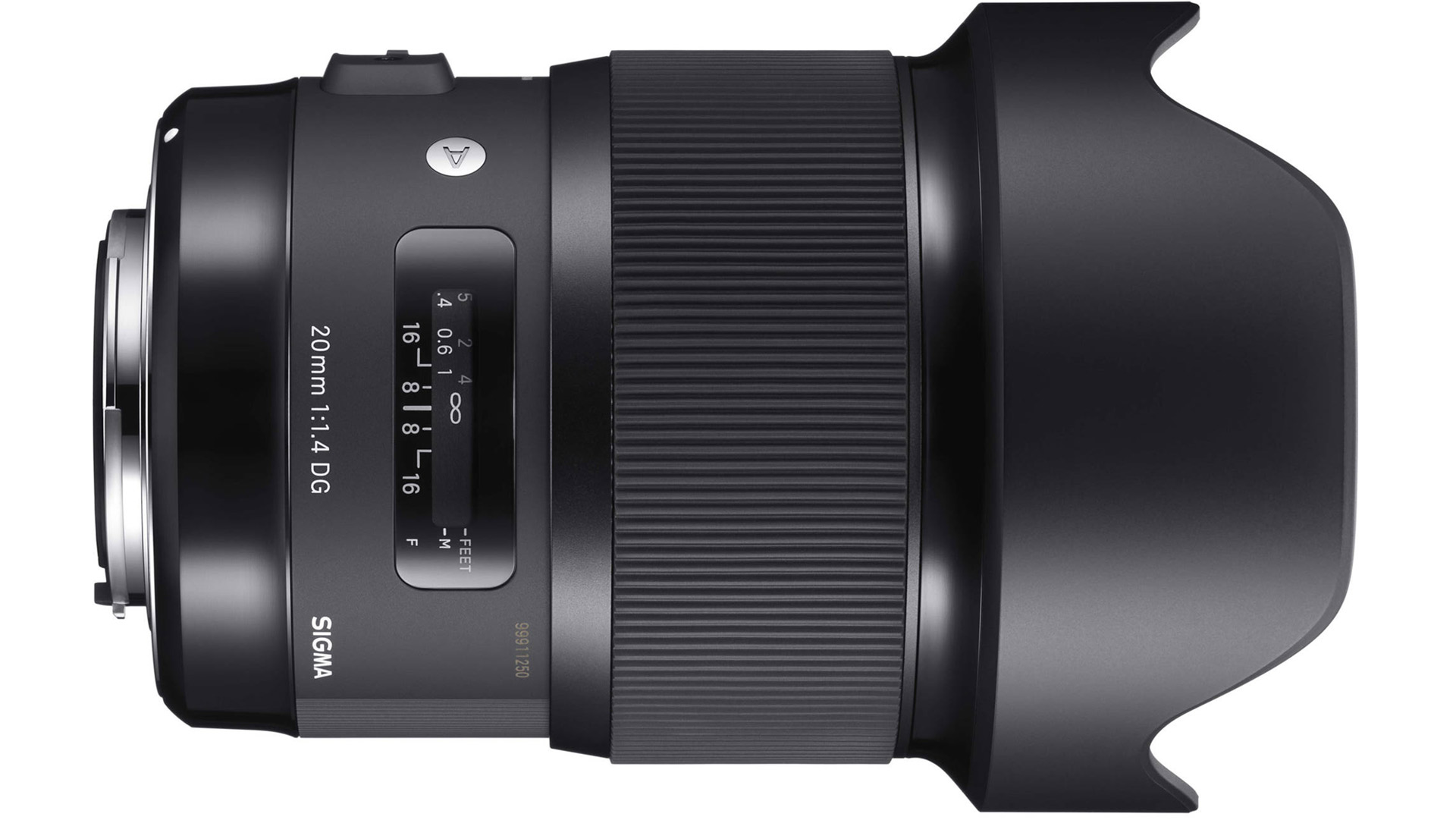 OK, here we go again, with what has become a regular routine. Sigma announced another new lens doing what nobody has been able to do before. My expert friends, technical people I ask questions of, all say, “I don’t know this time. I just don’t see how they can pull this one off. Not at that price point. When are you going to test it?”

And then I test it, and tell everyone Sigma has done it again. (That groan you just heard is the blog editor who HATES when I don’t build up suspense and make you read to the end.) And yes, I realize I’m starting to be called a Sigma Fanboy. But that’s kind of like shooting the messenger, isn’t it? I’m just putting the lenses on the machine and writing up the results.

Let’s face it, Sigma is just hitting one home run after another. I don’t really have any use for a 20mm f/1.4 lens myself and I’ll never buy one. But I’m a geek and there’s nothing cooler to me than a company who likes doing stuff nobody has ever done before, and then does it better than anyone believes possible. So, OK, maybe I am becoming a Fanboy.

Anyway, let me show you what Sigma has accomplished as far as making a f/1.4 lens wider than any other SLR manufacturer has been able to do. Before you minimize the difference between a 24mm f/1.4 and a 20mm f/1.4, let’s just mention that’s a really big difference. So my expectations going in were that the Sigma 20mm f/1.4 DG HSM A1, even if it was great, wouldn’t be quite as good as either the Canon or Nikon 24mm f/1.4 lenses.

As always – we are showing the average of 10 copies of each lens, each copy shot at 4 rotations to give a complete cross-section of the field of view of the lens. 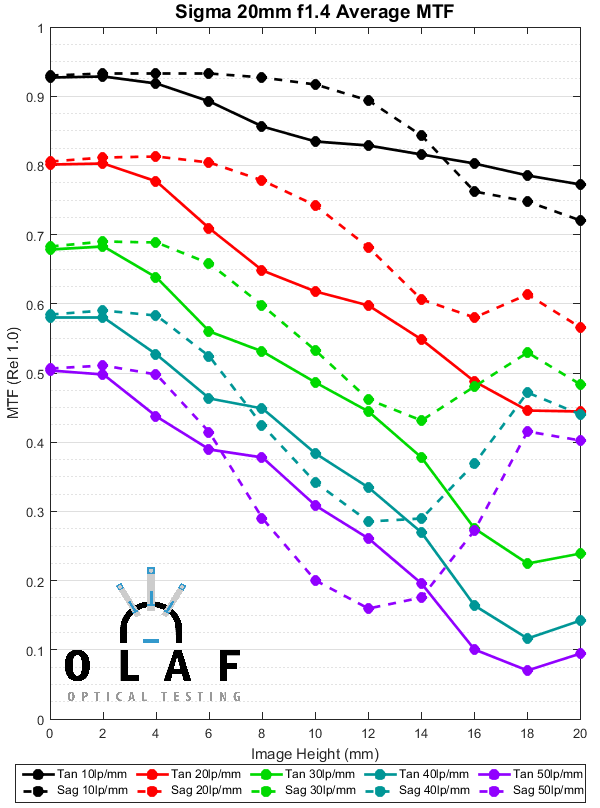 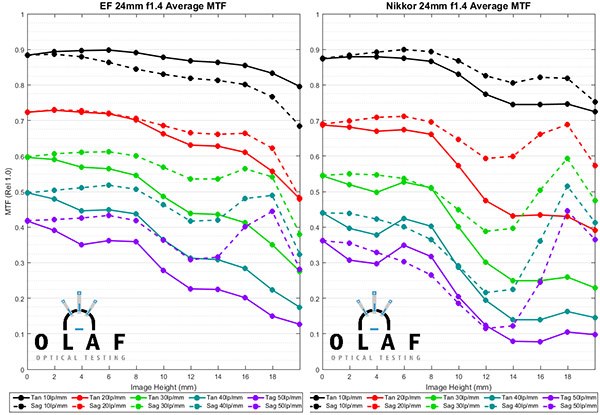 The bottom line here is pretty obvious. Despite being a wider field of view, the Sigma 20mm f/1.4 clearly has a higher resolution than either the Canon or Nikon 24mm f/1.4 lenses do in the center half of the image, and are at least the equal of the others in the outer half. That’s just flat amazing. Even more amazing to those of us who have in the past shot the old Sigma 20mm f/1.8 lens, which could be charitably described as ‘artistic’, but never described as sharp. 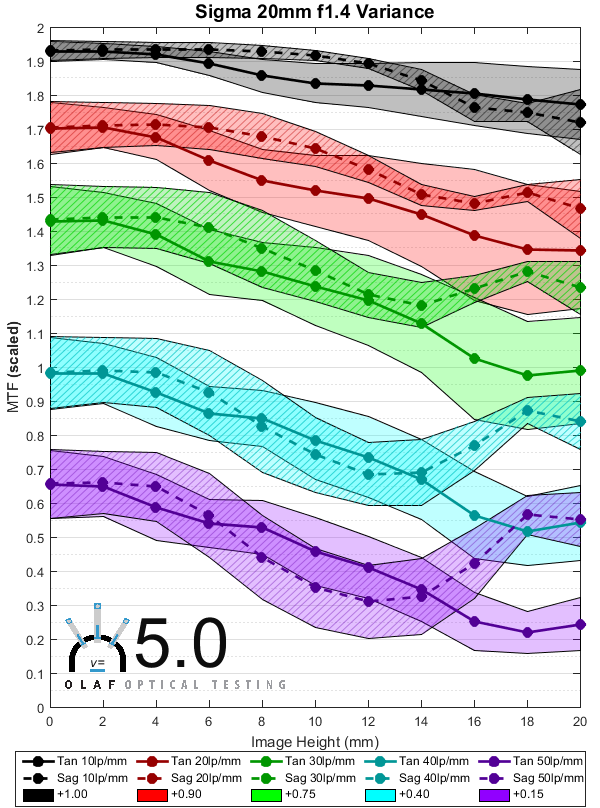 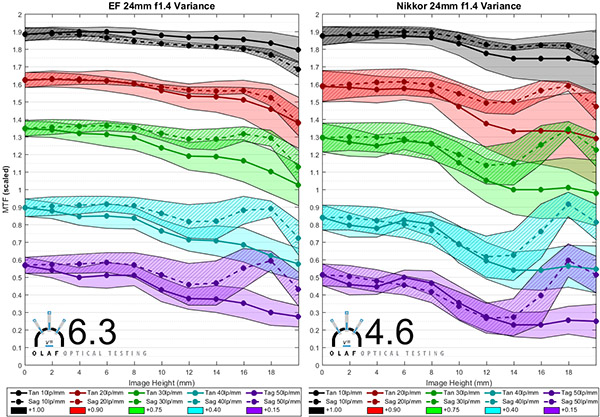 The variance plots for the Sigma look decent, certainly as good as the Nikon although perhaps not quite as consistent as the Canon. Still, I think it’s an excellent performance for a lens that’s significantly wider than the two we are comparing it to. Not to mention significantly less expensive.

With a wide-angle, wide-aperture prime lens, MTF is probably not the main consideration in whether you buy the lens or not. Theses lenses are used for different things by different photographers and bokeh, handling, vignetting, and dozens of other things I don’t test for will make a bigger difference in whether you like the lens, rather than simply how sharp it is.

Everyone’s first comment seems to be, “Well, I don’t need a 20mm f/1.4 lens”. I said that myself. But then I realized, well, I’ve never had the opportunity to use a sharp 20mm f/1.4 lens before, because there’s never been one . Will I like it? I have no idea. But I think I’ll at least check it out, it might be fun. Especially at this price point.

But the geek in me, at least, is totally impressed. Wider, faster, sharper, cheaper. What’s not to be impressed by?